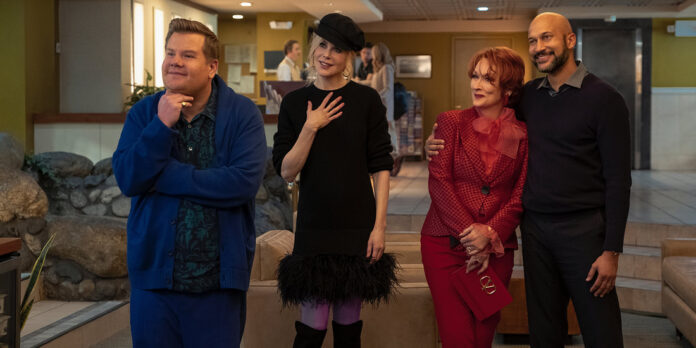 ​​Reviewing a film adaptation of a stage production is a tricky business. You have to divorce yourself from the property as you know it and do your level best to review the film independently, which can be problematic in the best of circumstances. In the case of Ryan Murphy’s film version of “The Prom,” that’s even harder because so much of what the film gets wrong is tied to what the stage production (under the direction of Casey Nicholaw, retained to choreograph the movie) got so very right.

“The Prom” is a classic musical comedy that follows classic narcissistic Broadway stars Dee Dee Allen and Barry Glickman as they chase a “safe, non-violent, high-profile, low-risk injustice” that they can use to solve their PR issues when their latest musical “Eleanor! The Eleanor Roosevelt Musical” closes on opening night after a particularly withering review from The New York Times that calls explicitly out their unlikeability. That injustice is in Edgewater, Indiana, where young Emma Nolan wants to go to the high school prom with her girlfriend. The PTA doesn’t allow it, though, and chooses to cancel the prom altogether instead of letting her attend with her chosen date. It’s a strange beast of a show, one that mercilessly skewers celebrity activism, specifically divas with an overinflated sense of self who insert themselves into places where they aren’t wanted, needed, or even recognized while showing a real love and care for the denizens of Edgewater. Written by Bob Martin and Chad Beguelin, the script veers wildly between acid-tongued comedy and sweetness, often using a hilarious moment with the Broadway stars only to immediately blindside the audience with a genuinely touching moment between Emma and her girlfriend, Alyssa. It’s a fine line that Nicholaw and his cast walked with aplomb, perfectly characterized by the finales of its two acts: The first is tear-jerkingly dark, while the second is as strong a get-up-and-cheer moment as has ever closed a Broadway show.

Ryan Murphy, however, is not a director who has ever been good at walking a fine line, always dialing everything up to 11 even when the moment calls for subtlety. His film version of “The Prom” is no exception, starting with a glitzy, gaudy vision of a Broadway opening night awash in the brightest golds and jewel tones you could possibly imagine. As Dee Dee and Barry, Meryl Streep and James Corden dial up the campiness of their characters in their first scenes, as is appropriate for the comic self-love anthems “Changing Lives” and “It’s Not About Me.” Still, their performances stay high-pitched even when the script calls for them to abandon the camp artifice of the opening and embrace the humanity of these characters. Streep handles this well, clearly having a blast inhabiting such a narcissistic diva and singing in glorious voice. Corden, though, cannot overcome his poor casting, and this is one of the most notable instances of how Murphy’s inability to handle tone lets down the material. On stage, the Tony-nominated Brooks Ashmanskas managed to play Barry as both a prancing gay queen stereotype and a real human being with deep feelings and private hurts. Whether his performance came across as genuine because Ashmanskas himself is gay is up for debate. However, there is something to be said for how a gay person playing a stereotypically gay character comes off as an actual person with stereotypically gay traits rather than a caricature. And this is what Corden offers: A caricature of a man, who eventually opens up into a different kind of caricature. Yes, late in the film, Corden does drop his performance’s effeminacy for a couple of scenes added for the film that address Barry’s personal history with coming out, and he does his best to perform them genuinely. But this is much a caricature as his early scenes, substituting teary recriminations to the mother who didn’t accept him coming out for the lisp and loose wrists of previous scenes. Corden’s performance never feels entirely genuine, and when your film’s message is all about living proudly and openly as your authentic self, his casting seems even more hypocritical when he doesn’t deliver the goods.

The other performances are varying degrees of fine. Tony winner Andrew Rannells shines as the overly self-serious Juilliard graduate Trent Oliver, using his innate charisma to sell the show’s worst song (“Love Thy Neighbor”). Ariana Debose, late of “Hamilton” and soon-to-be Anita in Steven Spielberg’s “West Side Story” remake, is effective as Emma’s closeted girlfriend, Alyssa. However, the role’s nature requires her to tamp down her natural charisma for most of her scenes. Kerry Washington is similarly effective (if overly Auto-tuned) as Alyssa’s mother, the PTA President. The surprise stand-out is Keegan-Michael Key as the high school principal, Mr. Hawkins, who also happens to be a fan of Dee Dee’s. Key is a great straight man for all the comic madness happening around him, and his mixture of admiration for and exasperation with Streep’s Dee Dee is one of the more genuine things in the film. Nicole Kidman is a lot of fun as aging chorus girl Angie Dickinson, finding her own “Zazz” as she helps fresh-faced newcomer Jo Ellen Pellman as Emma find hers. Pellman is incredibly winning and knocks her songs out of the park, but Murphy’s direction, unfortunately, fails her.

In Murphy’s vision, Emma is played as a wide-eyed ingenue who takes the bullying from her classmates notably well. This flattens her arc from what it was on Broadway, where Emma began as someone who desperately does not want the attention her fight to go to the prom has gotten her. But here, she seems excited that these “liberals from New York City” have come to help her. This is a smaller journey for Emma to go on, and though Pellman plays it with plenty of pluck, it makes her big moment feel like a preordained success, as opposed to something that feels genuinely surprising and moving. Of course, part of the reason for Emma’s flattened arc is because of the added material for Dee Dee and especially Barry. An obsession with Hollywood celebrities shouldn’t come as a surprise to anyone who’s been following Ryan Murphy’s career, but here that obsession comes at Emma’s expense, making her feel like a supporting character in her own story – completely antithetical to the spirit of the Broadway show, which treated Emma’s character arc as every bit the equal of that of the Broadway stars.

This stronger focus on the Broadway characters means that the material’s big tonal shifts are even bigger here. Murphy’s penchant for glitzy, overproduced camp means that the film isn’t just comic; it’s broadly comic. Meanwhile, his penchant for painfully overwrought melodrama means that the film doesn’t just wear its heart on its sleeve. It lets that heart bleed all over the place. This material managed to work on stage in part because of the nature of live theater, which allows for audience interaction in a way that film does not – you can’t hold for laughter in a film without it feeling awkward, even if you can build in a pause for applause after a musical number. Unfortunately, Murphy has never been great at handling tonal shifts, and his inability to direct a scene at anything less than a 10 means that the film careens back and forth between different sets of emotions at a rate that could give you whiplash and actually ends up softening the film’s emotional impact.

Despite all this, the source material is strong enough, and the performers mostly joyous enough to still make “The Prom” work at a base level. The larger story arc is almost perfectly constructed to be a guaranteed crowd-pleaser, and the final sequence is near-flawless. Because of this, the film can withstand the issues with the individual character arcs. But Murphy is a remarkably unsubtle director, and hardly a scene goes by that isn’t overstuffed. There’s the energetic, swooping camera moves from cinematographer Matthew Libatique; the over-caffeinated editing from Peggy Tachdjian and Danielle Wong; the over-designed sets slathered in bright, garish colors; and the aggressively manipulative underscoring to contend with. This is all very much The Ryan Murphy Aesthetic, and it’s one that can work in small doses like an episode of his musical comedy TV series “Glee,” but over the course of two and a quarter hours, this relentless display of showmanship becomes exhausting. Instead of reinvigorating the material as it moves from the stage to the screen, it instead feels like Murphy desperately pumping the material full of artificial sweetener. He should have known better – “The Prom” is plenty sweet enough as it is, and the thing about artificial sweetener is that it almost always leaves a sour aftertaste.