“THE PEOPLE WE HATE AT THE WEDDING” 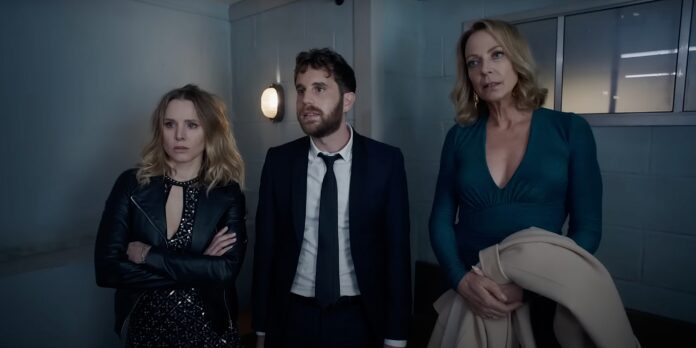 THE STORY – Family tensions ramp up among siblings in the week leading up to their half-sister’s wedding in the country.

The gathering of a group of people for a specific event is a moment that is inherent with interesting potential. The forces that draw a cross-section of clashing personalities into a single space are filled with opportunities to explore some profound emotional territory. However, it can also be laden with caricature, leaving a hollow commentary that suffers from such a sprawling scope and weak backdrop. It takes a deft hand to make such a narrative compelling, and this effort can easily slide into the mundane. For “The People We Hate At The Wedding,” the results are, unfortunately, more toward the latter. Despite some good players, the final work is a largely banal affair.

The special occasion that has just been announced is the wedding of Eloise (Cynthia Addai-Robinson), the daughter of a fractured American family who has lived her life away from them in England. Their dynamics are entirely dysfunctional, as evident by her half-siblings. Alice (Kristen Bell) is navigating a tumultuous personal and professional life as her affair with her married boss is causing an implosion. Paul (Ben Platt) is experiencing his own hardships with a deteriorating relationship with his boyfriend. Their mother, Donna (Allison Janney), has attempted to keep all these loose threads together but is constantly ignored. All these individuals resent one another, and finally, coming together will reveal the deeper truths that all must eventually confront.

One can immediately recognize the objective to examine these disparate yet engaging characters, frontloading a light and comedic tone that will occasionally disperse for more poignant moments. It’s a noble task that ultimately has a mostly flat execution. The comedy can find a few opportunities to land an amusing remark, but it’s primarily stale and wooden. The hijinks are tedious to endure, and the plot indulges in stagnant motivations that push the plot along in the most monotonous fashion. The unassuming direction from Claire Scanlon is merely serviceable, while the script from Lizzie Molyneux-Logelin and Wendy Molyneux can’t be saved by the crafting of characters that lack any endearment. So much of the storytelling is reliant on pedestrian squabbling and blunt catharsis, bizarrely bookended by stilted narration. There are infrequent times when the more effective beats can be found within this screenplay, but it is often lacking in innovative characterization.

Usually, a film like this would be saved by the ensemble’s talents, which is mostly true here. The unfortunate element this cast must tolerate are roles that lack any aspect that would create a more captivating portrait. That is mainly felt with Janney, playing a broadly defined matriarch without much beneath the surface. Platt shines in some scenes, but the intentional grating persona is difficult to overcome, despite his pleasant banter with Karan Soni as his boyfriend, Dominic. The only one who actually soars here is Bell, inhabiting a nuanced and layered portrayal that speaks to the inner complexities of this woman. She has a lovely rapport with Dustin Milligan, playing a potential new love interest she meets while traveling, and the sequences with Addai-Robinson are some of the few effective times of heartfelt commentary. Despite a host of great actors in this troupe, Bell is clearly the one who rises above the material.

The attempt to make “The People We Hate At The Wedding” an alluring showcase of a broken family finally coming together can be infrequently engrossing. The actors mostly achieve that endeavor, and even that is mainly due to the singular performance from the incredible Kristen Bell. The others do their best but are shackled by an anemic screenplay that is laborious in the thematic analysis it presents. There is the promise of an enthralling premise to mine here, but the collection of ideas only somewhat coalesces into a satisfying whole.

<b>THE GOOD - </b>The cast is full of good actors, with Kristen Bell rising above them all. She gives a layered, nuanced, captivating performance, elevating the material with her portrayal.<br><br> <b>THE BAD - </b>The film is a mostly mundane exercise, featuring flat comedy and bland characters. The storytelling reaches for pedestrian emotional reveals and tedious hijinks as a source of humor. The filmmaking is unassuming and unmemorable.<br><br> <b>THE OSCAR PROSPECTS - </b>None<br><br> <b>THE FINAL SCORE - </b>5/10<br><br>"THE PEOPLE WE HATE AT THE WEDDING"