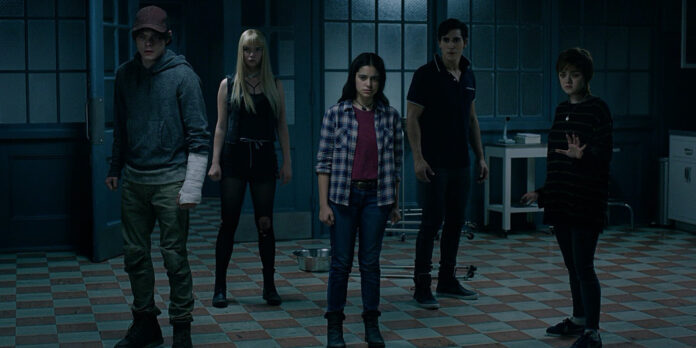 THE STORY – Magik, Wolfsbane, and other teenage mutants try to come to grips with their superpowers while staying at a secret facility.​

Enough has been written about the many, many delays of “The New Mutants” before it was able to finally premiere in the midst of a pandemic. Shot from July to September 2017, it was originally supposed to come out in April 2018 if you can believe it. Any hope I had of this film being worth the wait, or at least exceeding the lowest expectations, were dashed almost immediately. “The New Mutants” indeed brings something new to the “X-Men” universe (a teen-centric story with horror elements), but it ultimately feels like a poorly written CW-equivalent of the X-Men universe.

Except for fleeting references to Charles Xavier and the rest of the X-Men, there would be no evidence that “The New Mutants” exists in the same universe. There’s no connective tissue of substance to bring this new narrative into the larger story we’ve seen on screen for the last two decades. Instead, there are only six real characters in this entire movie. It’s an admirably small-scale story, set entirely in one location: an isolated hospital. Dr. Reyes (Alice Braga) is the sole staff member of the mysterious hospital, which now houses five young mutants: Rahne (Maisie Willaims), Illyana (Anya Taylor-Joy), Sam (Charlie Heaton), Bobby (Henry Zaga), and most importantly, the newcomer of the bunch, Dani (Blu Hunt).

After a traumatic incident that wiped out her entire Native American reservation, Dani wakes up in the hospital and is informed by Dr. Reyes that she’s there to discover and become more comfortable with her powers, so as to not be a danger to herself or others. Unfortunately, no one, including Dani, knows what her powers actually are yet. The next 45 minutes of the film essentially consists of the kids just getting to know each other. It’s full of every trope you can imagine from a teen movie. Illyana is the mean girl, while Rahne is the quirky shy one, and since Dani is the new girl, Illyana harasses her as best she can. It’s all so underwritten and cringy. Dani and Rahne bond quickly, and their friendship soon blossoms into more.

Reports that “The New Mutants” is a horror film are greatly mistaken. This is as scary as “The Avengers,” though it feels like the endless delays may have removed some of the scarier elements. Not long after Dani enters the hospital (though the editing drags this out far too long), strange things start happening. The other kids are soon haunted by terrors from their past. They slowly realize that something sinister is happening, though Reyes is of little help in their mission to end the hauntings. Some of this plot description may sound like a potentially scary film, but not a single ounce of the final product, even the Slenderman-esque creeps who haunt Illyana’s nightmares, comes close to actually being scary.

The poor writing also does no favors for these actors. Taylor-Joy, an actress I greatly admire, is drowning in a thick Russian accent throughout. Heaton is similarly burdened with an ever-changing southern drawl. Hunt, in her film debut, does a fine job with what she’s been given, and it’s certainly worth celebrating that a Native American young woman is leading a major superhero film (if only the film itself was better). The ensemble is fine, but there’s very little they could do to bring any real charisma to this poor screenplay.

If this is the end of the X-Men Cinematic Universe as we’ve known it, it’s an extraordinarily strange note to end on (and most of us though “Dark Phoenix” was a poor note to go out on). The series has had its highs and lows, but none of the previous films are as dull as this one. It’s easy to imagine the horror film that director Josh Boone might have wanted to make within this world. Unfortunately, that’s not this film. “The New Mutants” brings nothing scary, cool, or interesting to the table. Instead, this will be more remembered for the repeated delays and production troubles this film faced more than anything. That is the more interesting story.