The NBP Film Community Award Nomination Ballots For The 2010s 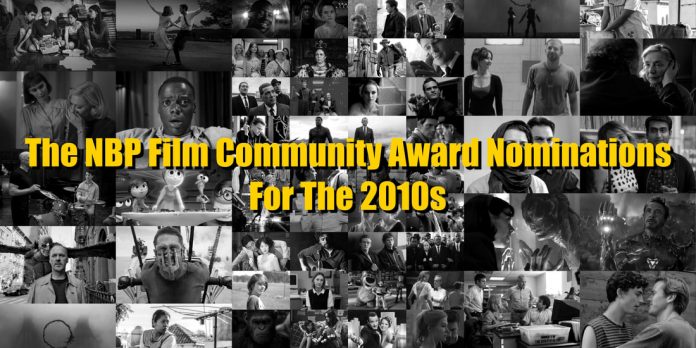 The nominations for the 2019 NBP Film Community Awards will be announced tomorrow 1/18/19 but we thought, why stop there? We just wrapped up an entire decade’s worth of movies. Why not give you all the chance to vote on what you feel was the best that these past 10 years had to offer? Which is why we are announcing The NBP Film Community Awards For The 2010s. This ballot is longer than the usual ones with more slots to vote for nominees. Take your time as we will not be tallying these up until February 2nd 2020. The winners will be announced after the Oscars.

Click below to fill out the form for the NBP Film Community Award Nominations For The 2010s.

​Please do your best when filling out the ballot to use the FULL FILM TITLE ​in your submission responses and for acting/director categories to state the actor/director AND the film you wish to nominate them for. For example…

Thank you and happy voting!!
​
You can follow Matt and hear more of his thoughts on the Oscars and Film on Twitter at @NextBestPicture