“THE MONOPOLY OF VIOLENCE” 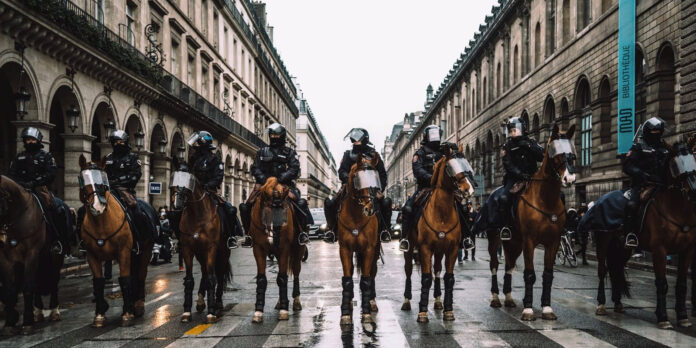 THE STORY – A group of citizens question and confront their views on the social order and the legitimacy of the use of violent police force.

The term “monopoly of violence” refers to the concept that the state alone has the right to use or authorize the use of physical force. In his lecture, “Politics as a Vocation” (1918), the German sociologist Max Weber defines the state as a “human community that (successfully) claims the monopoly of the legitimate use of physical force within a given territory.” In theory, this concept seems sound. However, what happens when a state is riddled with corruption? What happens when the ruling classes use physical force to suppress or even oppress those below them? What happens when those who are meant to protect and serve everyone in society become the ones committing brutal acts of violence?

Such questions are the basis of David Dufresne’s documentary, “The Monopoly of Violence,” an unflinching and often grueling look at the clashes between the “gilets jaunes” (the yellow jackets) protestors and French security forces. Not for the faint-hearted, the documentary uses a large proportion of social media footage taken by the protestors to show us firsthand accounts of what took place during the 2018 weekly protests. It’s brutal at times, and Dufresne manages to place the viewer in the situation. We almost feel like we are there on the streets of Paris, caught up in all the confusion and violence. As a result, this 86-minute documentary feels a lot longer – like an intense nightmare that we can’t quite wake up from.

Much of the documentary consists of one-to-one conversations between individuals offering their opinions regarding the police’s use of violence in the protests. We hear from various individuals, all from their own unique walks of life, from historians to law professors and sociologists, a police general, several lawyers, the UN’s special rapporteur, three police union representatives, and journalists. However, the most vital is the voices and opinions of the victims of the violence and their families. The individuals sometimes debate with each other regarding the legitimacy of using violence and police brutality. It can become quite heated, but it all occurs within a safe space so these people can freely express their views without the feeling of immediate danger. At times, an individual may talk to the camera to reflect on the political situation in France or provide us with a backstory to the footage we are witnessing.

It’s an excellent approach to take, as we get a sense of the whole picture rather than simply focusing on one side of the argument. It’s also important to reflect on the importance of cell phones and social media. This documentary proves how they have both become powerful tools in revealing what’s happening on the ground. Although the director’s views are not clearly expressed in the film, we get the impression that he is very critical of France’s media and president Emmanuel Macron’s government. However, the documentary never falls into bias or becomes preachy. Instead, Dufresne allows the footage and the people to speak for themselves.

Without prior knowledge of who the “gilets jaunes” are and the political situation occurring in France, you may find the documentary hard to follow at times. There’s little explanation given about what the protestors stand for, and virtually no introductions are given to any of the speakers voicing their opinions and views about the topic of discussion. It’s worth adding to those unfamiliar, the “gilets jaunes” movement is described on Wikipedia as a “populist, grassroots protest movement for economic justice that began in France in October 2018.” The movement was initially motivated by rising fuel prices and a high cost of living due to the government’s tax reforms. The decision for the protestors to wear yellow, high-visibility jackets was in relation to its association with the lower working classes, and as a result, it has become a symbol for many others across the world who have adopted it in their own protests.

The sheer brutality of the acts depicted in the footage is hard to endure. Dufresne doesn’t censor anything; we see all of it in its macabre glory. You will feel shaken to your very core and will be left in a state of numb shock once the credits roll. It may be possible that some might argue that it’s exploiting the violence simply for shock value, but it feels necessary for us to witness the ugly side of the truth to reach our own conclusions.

This is certainly a very timely documentary when we reflect on the current state of police brutality; not just in France but in the Western world. “The Monopoly of Violence” leaves the viewer pondering many philosophical and political concepts, and this may frustrate some people who are left with more questions than answers. And because of its gritty and unyielding use of violent footage, this documentary may fail to reach a wider audience – and it’ll be an awful shame if it doesn’t. Although it’s one of the toughest documentaries you may ever watch, it is essential.