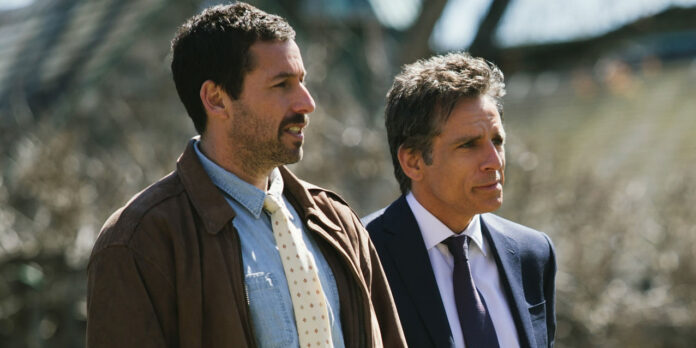 THE STORY – The adult children of Harold Meyerowitz reunite in New York in preparation for their father’s career retrospective.

​​
Noah Baumbach’s “The Meyerowitz Stories (New & Selected)” is unlike other Adam Sandler films you may have seen on Netflix as of late. Fans of the comedic actor’s more dramatic work in “Punch Drunk Love” & “Spanglish” will be happy to know he has found a winning combination in working with Noah Baumbach, much like his co-star Ben Stiller once did. Stiller is back as well and gets top billing along with Sandler as they are the focus of Baumbach’s latest that explores a dysfunctional Jewish-American family living in present-day New York City. “The Meyerowitz Stories (New & Selected)” gives the entire cast wonderful opportunities to dig into their characters and provide us with some of the funniest laugh out loud moments of the year.

Harold Meyerowitz (Dustin Hoffman) is an aging artist (And retired teacher), living in his Manahattan apartment with his second wife Maureen (Emma Thompson). His children, wealthy accountant Matthew (Ben Stiller), failed musician Danny (Adam Sandler) and their deadpan sister Jean (Elizabeth Marvel) all come to New York to celebrate their father’s work which will be featured in a small art gallery at the college he once taught at. The already dysfunctional family has a curve ball thrown at them when Harold ends up in the hospital and suddenly the three children have to re-connect with one another to decide what to do with their father’s legacy,

Starting with “Greenberg” in 2010, “The Meyerowitz Stories (New & Selected)” marks Stiller’s third collaboration with Noah Baumbach (Including their 2014 film “While We’re Young”) and it is not only their best but it is also the best dramatic work of Ben Stiller’s career. Playing the often favored child of the family by his father Harold Meyerowitz, Stiller digs deep into his character’s psyche to present a complex and broken man on the inside who on the outside is financially successful and appears to have everything together. Stiller shows more range here than he quite possibly ever has before, getting the chance to make us laugh, cry and feel his resentment and love towards his family.

While Danny Meyerowitz may not be the best performance of Adam Sandler’s career, it has been a long time since we have seen what he is truly capable of as an actor. Like Stiller, Baumbach gives Danny enough quirks and complex emotions which come to the forefront when his family is brought back together. He’s a failed musician, college dropout and has a limp. But most of all, he wants to succeed as a father where he believes his father failed him. It is wonderful work all around from the often critically panned actor.

Which brings us to the father himself, Harold Meyerowitz, as portrayed by the legendary Academy Award-winning Dustin Hoffman. Bumbling, self-centered and constantly talking over everyone else in the room, Hoffman will most likely receive a tremendous amount of praise for playing the aging patriarch of the family who believes in his work as an artist but cannot stop to appreciate his work as a father. I sense an Academy Award nomination for him in the future for his work here.

Sadly, the ladies of “The Meyerowitz Stories (New & Selected)” are not as fully developed as the men but they too get their shining moments. Emma Thompson plays Maureen, who is a recovering (She’s six weeks sober) alcholic, who stumbles and slurs her way comedically through her performance. Elizabeth Marvel is (No pun intended) a marvel as the deadpan sister of the family who’s story does not come to the forefront until later on in the film. She gets some of the film’s biggest laughs with her line deliveries but when she tells her brothers that making an effort to be there for the family is what life is all about, it resonates as an important moment for her character that helps to tie the entire film together.

When the time comes for Baumbauch to tie his own film together, his precise editing (Which is used many times throughout to great comedic effect) takes a slight turn for the worse, as he utilizes multiple fades to black and the film ultimately takes about 15 minutes to end. What was once a well paced dramedy with great wit and energy starts to stagger by the end. Luckily, there is enough good will built up throughout to keep this humane and funny film from going completely off the rails and into disaster.