Reactions To The 2022 Emmy Award Winners 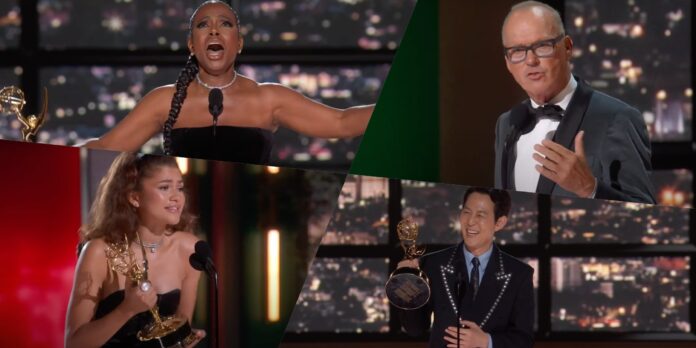 This jam-packed television season has officially come to a close as the winners of the 74th Primetime Emmys were revealed last night. It was a rushed affair, despite Kenan Thompson’s fine performance as host. Though it’s the biggest night in TV, meant to be a celebration of the entire television community, they gave winners a miserable amount of time to deliver their speeches before shuffling them off stage. But what of the winners themselves? With more content to choose from than ever, the Television Academy kept a nice balance between awarding returning favorites and outstanding newcomers. Let’s dive into the notable moments of the 74th Primetime Emmy Awards….

After winning Outstanding Casting in a Comedy Series, typically a bellwether for the top prize, many were understandably disappointed that “Abbott Elementary” didn’t win Outstanding Comedy Series. Nevertheless, the show made a significant impact at this year’s Emmys. Near the top of the show, Sheryl Lee Ralph won Outstanding Supporting Actress in a Comedy Series. It was somewhat of a surprise win, with co-star Janelle James considered the likelier contender from “Abbott Elementary.” Once Ralph hit the stage, there was no denying her star power. After belting out lines from Dianne Reeves’ “Endangered Species,” she continued into a speech about dreams long in the making. “To anyone who has ever, ever, had a dream and thought your dream wasn’t, couldn’t wouldn’t come true, I am here to tell you that this is what believing looks like, this is what striving looks like, and don’t you ever, ever give up.” Her speech was quick but straight to the point, tearing the house down. It’s the sort of speech that turns an underdog contender into a bonafide steamroller in future years.

Ralph is only the second black woman ever to win this category and the first in 35 years. Jackée Henry was the first to do so in 1987 for her role in “227.”

Later on in the night, Quinta Brunson took home the Emmy for Outstanding Writing in a Comedy Series. It’s the first time a broadcast network TV show has won this prize since “30 Rock” in 2013. While the show may have ultimately lost Outstanding Comedy Series to “Ted Lasso,” it’s clear that “Abbott Elementary” is not only welcome to the club but could remain a top contender in these categories in the years to come.

Though Outstanding Comedy Series felt very much up in the air heading into tonight’s show, “Ted Lasso” proceeded to dominate the awards for the second year in a row. Jason Sudeikis and Brett Goldstein won their respective acting categories yet again. Hannah Waddingham lost to Sheryl Lee Ralph, but “Ted Lasso” picked up a win in a new category this year: Outstanding Directing in a Comedy Series for MJ Delaney. Despite legendarily tough competition against “Abbott Elementary,” “Barry,” “Only Murders in the Building,” and “Hacks,” the Academy stuck by the Apple TV hit. If the rumors are true, and the show only has one season left, it’s possible “Ted Lasso” could pull off a rare feat: wins for every season of the show.

SUCCESSION DOES IT AGAIN

When they like you, they stick by you. As with the Comedy categories, the Academy stuck with the known quantity this year, giving “Succession” their top prize, Outstanding Drama Series. Jesse Armstrong also continued his perfect streak, winning Outstanding Writing in a Drama Series for the third time, once for every season thus far. Of the show’s numerous acting nominations, Matthew Macfadyen took home the trophy for Outstanding Supporting Actor in a Drama Series this year. Much like Sheryl Lee Ralph’s win, Macfadyen’s win was somewhat of an upset over his co-star Kieran Culkin, who was largely expected to win his first Emmy. Though the Academy did spread the wealth a bit in the Drama categories, “Succession” still the landing.

It’s likely that “Squid Game” was close to winning the top prize, though, pulling off significant wins in Outstanding Lead Actor in a Drama Series (for Lee Jung-jae) and Outstanding Directing in a Drama Series (Hwang Dong-hyuk). Wins for shows not in English are extraordinarily rare, so these high-profile trophies are a big deal.

Two strong newcomers left without any wins this evening, “Severance” and “Yellowjackets.” Showtime’s survival thriller wasn’t expected to win many categories this year, but “Yellowjackets” star Melanie Lynskey was widely predicted to take home Outstanding Lead Actress in a Drama Series. Instead, she lost to Zendaya, who won her second Emmy in a row for “Euphoria.”

“Severance,” on the other hand, was seen as a strong contender across the board and a threat to win Writing, Directing, and perhaps even Outstanding Drama Series. Unfortunately, it went home empty-handed at the televised ceremony. It did, however, pick up Outstanding Music Composition for a Series and Outstanding Main Title Design at the Creative Arts Emmys. If the show’s second season lives up to the standard set in season one, the show could be a formidable contender in future years.

In one of the most remarkable years for limited series ever, “The White Lotus” didn’t leave much room for the competition. Mike White’s series took home Outstanding Limited or Anthology Series, Writing, Directing, and both Supporting Acting categories in Limited Series. The show had already snagged 8 out of the 14 Supporting Acting in a Limited Series nominations, of which Murray Bartlett and Jennifer Coolidge were able to win. Mike White made three speeches that were perfectly goofy and charming.

It’s a bit frustrating that while it took up so much space in the Limited Series categories, the series is returning for a second season featuring Jennifer Coolidge’s character. This feels a little unfair to future competitors in these categories. Of course, the word “Anthology” allows for a bit of a loophole here. Still, it would be frustrating to see one show dominate the Limited Series categories year after year when the nature of Limited Series is that they’re not recurring. Still, this first season deserved all the love and awards they won at this year’s ceremony.

While “Hacks” didn’t win as many Emmys this year, Jean Smart still took home her second win in a row for Outstanding Lead Actress in a Comedy Series. Michael Keaton and Amanda Seyfried also got their moments to shine, winning their respective leading acting categories for Limited Series. Julia Garner scored her third win in a row for Outstanding Supporting Actress in a Drama Series for the final season of “Ozark.” Elsewhere, Lizzo shook things up in Outstanding Competition Program, winning the category with her Prime series “Lizzo’s Watch Out For The Big Grrrls.”

Even with a few shows dominating their respective categories, this was still an exciting season of television. This year’s quality of the contenders was so high that it’s hard to be upset with any of the winners, even if one’s favorites didn’t win. Most of this year’s shows will be returning next show, so we’ve got plenty of rematches to look forward to.

What did you think of this year’s Emmy winners? What was the biggest shock of the night? How did you do on your predictions? Let us know in the comments below or over on our Twitter account.