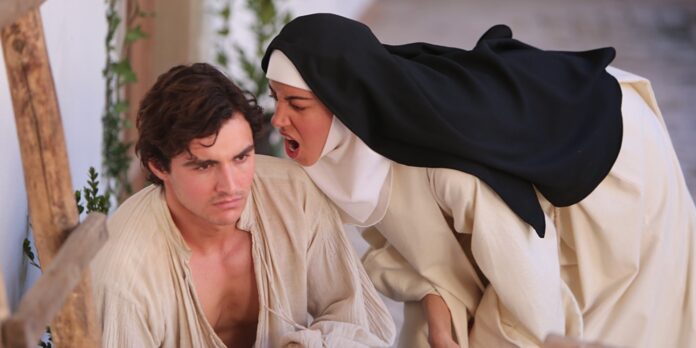 THE STORY – Medieval nuns Alessandra, Fernanda, and Ginevra lead a simple life in their convent. Their days are spent chafing at monastic routine, spying on one another, and berating the estate’s day laborer. After a particularly vicious insult session drives the peasant away, Father Tommasso brings on newly hired hand Massetto, a virile young servant forced into hiding by his angry lord. Introduced to the sisters as a deaf-mute to discourage temptation, Massetto struggles to maintain his cover.

​”The Little Hours” is one of the most bizarre yet gut-busting funny movies of 2017. With an all-star comedic cast that includes Aubrey Plaza, Dave Franco, Allison Brie, Kate Micucci, Molly Shannon, John C. Reilly & Fred Armisen, writer/director Jeff Baena has crafted a uniquely funny comedy that owes a tremendous amount of debt to “Monty Python” films such as “Life Of Brian” and “Monty Python And The Holy Grail” for putting the silly back into period. This is because within “The Little Hours” the characters are all confined to the time period which the film takes place in several hundreds of years ago, yet everyone speaks with the same foul mouth and lingo that permeates today.

Taking place within medieval times during the 14th century, “The Little Hours” follows Massetto (Dave Franco), a young man who has been caught cheating with a Lord Bruno’s (Nick Offerman) wife (Lauren Weedman). Massetto avoids capture and finds solitude with Father Tommasso (John C. Reilly) who runs a convent full of nuns (Aubrey Plaza, Allison Brie, Kate Micucci & Molly Shannon). In an attempt to hide his identity, Massetto passes himself off as a death mute and starts tending to the grounds of the church. However, the sexually repressed nuns all start to become curious about this new man and start making advances towards him, leading to suspicison and unexpected developments.

With a wholly improvised script and a tremendously gifted ensemble, “The Little Hours” is not a film that is so much concerned with plot as it is exploring its unique concept and providing lots of fun and laughs for its intended audience. It’s not a serious art-house independent film, nor is it a mainstream comedy. Rather, it is a mixture of both shot and presented to an audience that probably will not know what hit them when they watch it. It’s daring, original and a joy to watch.

Shot in wide to medium shots with rarely any closeups, Jeff Baena allows his cast to let loose verbally and physically. You can totally tell while watching the film that it was mostly improvised but all of the actors are game and their timing is phenomenal. Everyone in this movie simply wants to express their inner sexual desires but cannot due to the lives they have chosen, the church. Filled with donkeys, death mutes, witches and other strange oddities, “The Little Hours” is the most inconsequential time you can have at the movies this year.

It’s certainly goofy. It’s not necessarily deep. It may not even be that memorable when all is said and done but I must give credit where credit is due to Jeff Baena and his talented cast for trying something unique. There is a lot of subtext within this movie’s fully improvised story about sexual desire and conflicts of faith. It’s there if you can find it. Some will want to simply watch some of their favorite comedic actors have a good time within the ridiculousness of what Jeff Baena has created and that is fine. Usually, when one thinks of the middle ages and the darkness within that era, the genre can produce some powerful stories with superb drama. “The Little Hours” is proof that there are still original concepts and ideas to be explored within cinema. Whoever thought a 14th-century medieval period piece could be so much fun?