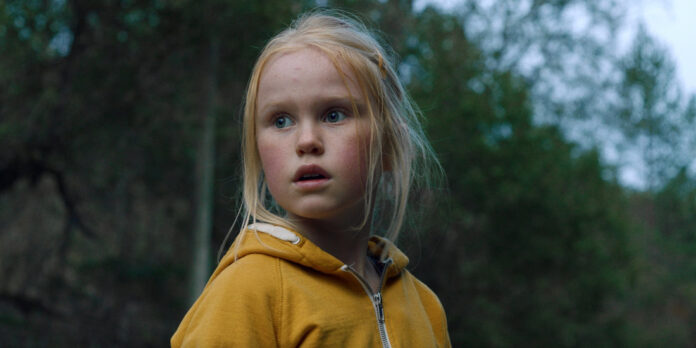 THE STORY – During the bright Nordic summer, a group of children reveal their dark and mysterious powers when the adults aren’t looking.

​​​​​Kids are weird. More specifically, they can act petty, vengeful, and unpredictable in ways that their future grown-up selves would never behave. Films don’t typically capture children in a well-rounded way, often focusing on portraying them as either bratty and obnoxious or adorable and cherubic. “The Innocents,” the new film from Eskil Vogt (co-writer of the recent sensation “The Worst Person in the World“), focuses on four Norwegian youngsters and portrays them in the oddly complex way that children actually act. Oh, and they all have supernatural powers.

Ida (Rakel Lenora Fløttum) is a young girl whose free time is often filled with looking after Anna (Alva Brynsmo Ramstad), her mentally disabled sister. Upon making a new friend named Ben (Sam Ashraf), the children begin to discover extraordinary powers of telekinetic and supernatural ability within themselves. As they test the limits of their gifts, it’s soon discovered that they can form a psychic link between themselves, Anna, and another young girl named Aisha (Mina Yasmin Bremseth Asheim). Using this bond, they can send messages and see through each other’s eyes across impossible distances. While this discovery initially brings the group nothing but joy, things start to take a turn as the dark wishes of childhood begin to come true.

To some audiences, the idea of watching a quartet of children for most of a film may sound off-putting. With a few notable exceptions, child actors can often come across as paradoxically overly rehearsed and unpolished. Thankfully, the four kids tasked with holding up “The Innocents” are all extraordinary. Much like their characters, they all seem gifted with unusual abilities that most children don’t have. Fløttum is a captivating lead, finding shocking nuance and variance in Ida’s actions and reactions. She’s especially impressive in one pivotal scene that requires her to come across as if she’s being mentally controlled by a friend. In an unbroken take, she conveys a handful of emotions, ranging from disbelief to excitement to vacant confusion mixed with fear. All three of the other young stars also get their moments to shine. Asheim, in particular, is a standout in the final act, wherein she must play some demandingly complex scenes that would be taxing on even an adult actor.

Vogt’s screenplay acutely understands the quirks and behaviors that make up children’s personalities and sets them apart from adults. They are accurately shown in this film to be wild, impulsive mini-humans, and if they were like normal children, they would most likely outgrow the minor conflicts they encounter, even if it seems like the end of the world to them at the time. But this group faces genuinely dire circumstances and is blessed – or cursed – with powers that can’t be responsibly wielded at their age. In fact, the supernatural forces they possess can be seen as a brilliant realization of the types of abilities for which children often dream. Rather than a wonderous X-Men-like story, “The Innocents” is a dark fantasy of dangerous wish fulfillment.

With its chilling tone and unbelievably captivating child performances, Vogt’s film is a foreboding exploration of the sinister impulses that power can reveal, whether realistic or fantastical. But don’t be fooled by its superhero-adjacent logline; there’s no magical snap that can undo the damage already dealt to these young lives across the course of this eerie tale.