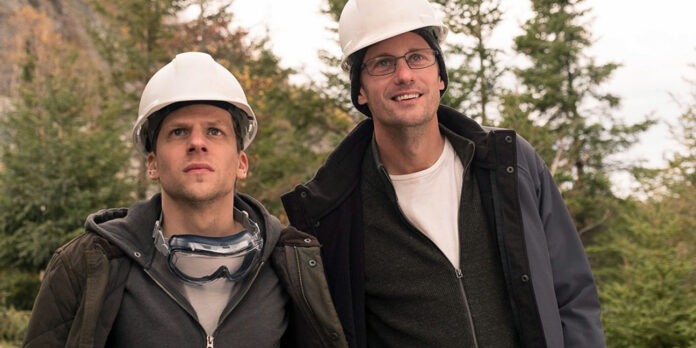 THE STORY – Cousins Vincent and Anton are players in the high-stakes game of high-frequency trading, where winning is measured in milliseconds. Their dream is to build a straight fiber-optic cable line between Kansas and New Jersey, making them millions, but nothing is straightforward for this flawed pair. Anton is the brains, Vincent is the hustler, and together they push each other and everyone around them to the breaking point with their daring adventure.
​
THE CAST – Jesse Eisenberg, Alexander Skarsgård, Michael Mando, Salma Hayek & Sarah Goldberg

​The world is moving faster and faster every day. If you blink, you may miss something big. In the high-stakes world of Kim Nguyen’s “The Hummingbird Project,” dollars are measured in milliseconds when it comes to the stock market, as the information travels through parts of the country, leading to New York, where deals can be made and millions can be made. With an interesting and engaging cast, plus a premise that we don’t see that often, Nguyen continues to show growth as a filmmaker (He previously directed the Academy Award-nominated film “War Witch”), even though his latest, despite all of his best efforts, is not perfect.

Cousins Vincent (Jesse Eisenberg) and Anton (Alexander Skarsgård) are trying to achieve the American Dream: get rich…quickly. How does one do that? Vincent has the idea to build a straight fiber-optic cable line which will transport stock market information from Kansas to New York City faster than the rest of the competition, including his former boss (Salma Hayek). By achieving a one millisecond advantage they will effectively rake in millions of dollars for their efforts. Vincent handles the business side of operations, working alongside contractor Mark Vega (Michael Mando), while Anton locks himself in a hotel room, trying to crack the code which will help the cousins achieve that one millisecond. Time is of the essence as the line continues to get built despite hurdles that enter their way, pushing both of them to the breaking point.

The number one thing that struck me right away about “The Hummingbird Project” (Titled this because a hummingbird can flap its wings in one millisecond) was to find out after the fact that the story was not an adaptation from a previous source material. Nguyen did his research and read individual stories about high-frequency trading but his characters and the situation they find themselves in, along with the dates, locations and every other minor detailed contained within this script are completely fictional. “The Hummingbird Project” does an excellent job of presenting the details of its screenplay though as if it is a factual story of two family members who had a dream to get rich by getting there first. This level of detail and authenticity actually goes a long way in immersing us into the story and the characters despite their unlikability.

Jesse Eisenberg is perfectly cast as the suave and smooth talking Vincent, who has the vision and the showmanship to sell his idea to both large and small players in his grand plan to build a straight fiber-optic cable line from Kansas to New York City. It’s the actor’s best role since “The Social network” and is written to play to his strengths as an actor. He’s smart, charming and driven to a fault, as he pursues his dream in the face of growing obstacles both professionally and personally.

Alexander Skarsgård sheds his good looks and charm to play totally against type as Vincent’s cousin Anton. Socially awkward, unpredictable and perhaps a bit mentally unstable, he is a family man who knows computers and the math required to achieve the one extra millisecond he and his cousin need in order to succeed. However, he does not understand people. Bald and in a bathrobe for most of the time, Skarsgård is such a joy to watch on-screen as he shows us that he’s completely capable of being a great character actor as well as leading man.

Nguyen employs an electic soundtrack containing different genres, smooth editing (the opening shot of the film perfectly establishes that this is a director in control of his craft) and a cast that also includes Michael Mando (“Better Call Saul”) and Salma Hayek (who is sadly not given enough to do here). However, where “The Hummingbird Project” falls apart is in its hollowness. Both Anton and Vincent are interesting characters but the screenplay does not go that one level deeper allowing them to emerge as a truly iconic on-screen duo. The emotion of the film stems from a complication that arises pertaining to Vincent’s health, however, due to his unlikable nature, it’s hard for us to have true empathy for him.

Nguyen’s film asks us an important question which is “What’s at the end of the line?” Ultimately, this is a movie that is dealing with time and how quickly it can move for us all. It rehashes a common theme we’ve seen play out before which is that the story is all about the journey, not the destination. I would recommend seeing “The Hummingbird Project” for the strength of its two lead actors (although, I still wish Mando and Hayek had more well-rounded characters) and for the ambition writer/director Kim Nguyen provides,  given that this is a wholly original piece of work but if time is of the essence and you would rather spend it watching something else, you’re honestly not missing much.