“THE HOLE IN THE GROUND” 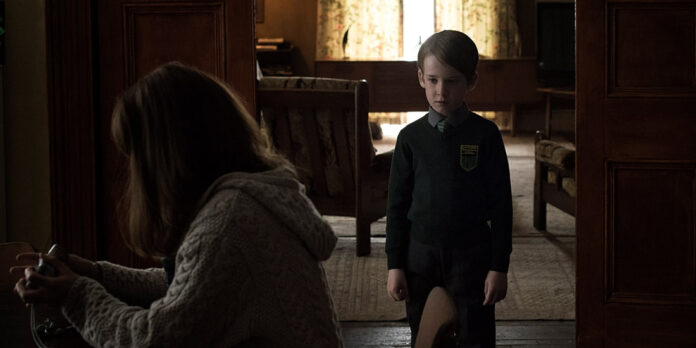 THE STORY – Sarah moves her precocious son, Chris, to a secluded new home in a rural town, trying to ease his apprehensions as they hope for a fresh start after a difficult past. But after a startling encounter with a mysterious new neighbor, Sarah’s nerves are set on edge. Chris disappears in the night into the forest behind their house, and Sarah discovers an ominous, gaping sinkhole while searching for him. Though he returns, some disturbing behavioral changes emerge, and Sarah begins to worry that the boy who came back is not her son.

​​​​​Do we ever really know our own children? Parents may try their best to raise their child to be better than they are but seeing as how they cannot be with them 24/7 throughout their entire life, there is always the lingering doubt that maybe, things have gone wrong. “The Hole In The Ground” explores this theme of nature vs. nurture through the horror genre. While its technical aspects and the acting from the two principle leads do a lot to carry us through the story, the film comes undone in the horrifying third act, simplifying its message and making us question if the journey was all worth it?

Sarah (Seána Kerslake) is a single mother who moves with her bright and normal son, Chris (James Quinn Markey), to an isolated home deep into the country in Ireland, surrounded by long stretches of nature. Determined to start a new life, away from their troubled past with Sarah’s ex-husband, all seems like it is going well for the small family until Chris goes missing one evening. Sarah does not find him but instead finds a giant sinking hole in the ground. Upon returning home, she is reunited with her son but something is different. He’s more ominous, more disturbing and exhibiting abnormal behavior. Is Chris really her son or something else?

The first thing to take away from director/co-writer Lee Cronin debut horror film is how remarkably crafted it is. The sound design, haunting score, patient editing, striking cinematography. All of it shows a filmmaker who is displaying real promise as an artist and craftsman, something rarely seen in modern day horror films unless they come from the independent system which “The Hole In The Ground” has. The toned down color palette highlighting browns, greys, and blacks also helps to give this moody slow-burn horror film a distinctive look.

Seána Kerslake and James Quinn Markey have good chemistry as a mother and son who are going through a period of change and transition. Kerslake conveys believable emotion as a protective mother who has to shoulder a majority of the film on her back. James Cosmo is also a welcome presence in the film’s second act as a grieving father married to a troubled wife, although I fear his storyline is undercooked and doesn’t go as far as it should in helping to advance the film’s message.

And that’s the largest problem about “The Hole In The Ground.” The message boils down to a simple “we don’t really ever know our children” which has been done before and feels a bit obvious to us. While there’s no denying that the film is well made and well acted, one wishes that Lee Cronin had more to say considering the patience he exhibits with his storytelling, building to a predictable finale that left me feeling as hollow as a hole in the ground. Cronin has more to offer us, I’m sure. And this is probably only the beginning of what will be a solid career because his control of tone, visuals and audio are definitely top-notch. Hopefully next time, he can transcend the genre he’s working in with a story that grips us more.