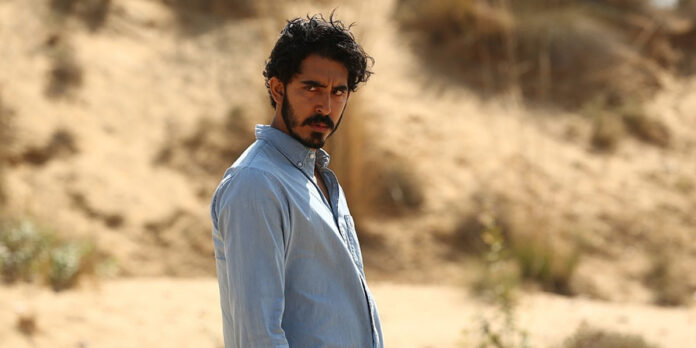 THE STORY – Jay is a man with a secret who travels from Britain to Pakistan to attend a wedding – armed with duct tape, a shotgun, and a plan to kidnap the bride-to-be. Despite his cold efficiency, the plot quickly spirals out of control, sending Jay and his hostage on the run across the border and through the railway stations, back alleys, and black markets of New Delhi – as all the while attractions simmer, loyalties shift, and explosive secrets bubble to the surface.
​
THE CAST – Dev Patel, Radhika Apte & Jim Sarbh

​​A mysterious young man packs to leave Britain and travel to Pakistan. We watch as he goes through the airport, rents a car, buys clothes, a traveling bag, duct tape and then two guns. Suddenly, the ominous music that has been playing over this twenty-minute opening sequence makes sense. This man is on a dangerous mission. Why? And to what end? We don’t fully know at first. Unfortunately, the answer turns out to be more disappointing the longer Michael Winterbottom’s film goes on.

Dev Patel (“Lion“) gives a performance we’ve never seen him give before as a cool, confident and calculated young man with a ton of swagger, making him an ideal candidate to play James Bond someday if the studio were to be so bold. He doesn’t speak much and when he does, it’s blunt with focus and drive behind it. Radhika Apte plays the mysterious, seductive and ever shifting Samira who is set to marry Deepesh (Jim Sarbh). Sarbh rounds out the small cast as the overly cocky rich man who is looking to cut ties once the heat gets turned up on the job which was supposed to go more smoothly that it does. However, both of them don’t compare to what Patel is doing here. His poise, magnetic energy and command is absolutely riveting.

​The first half of this film is an engrossing thriller partly because of its mysterious elements. We don’t know who this man is, what his mission is, why he’s carrying it out and as he gets deeper into trouble with several roadblocks presenting themselves along the way, we are there for the ride. Then suddenly, the film takes a dramatic turn from globe-trotting thriller to an unearned romance between its two leads which feels like a character betrayal for Jay, partly because we don’t ever fully understand why he falls for this woman he has kidnapped in the first place. “The Wedding Guest” wants to be a character study of this ambiguous man but by the time we reach the third act, the hook of withholding information from the audience becomes a detriment to the storytelling, leaving us asking “why?” again but this time for the wrong reasons.

It’s certainly eye-opening to see all of the different aspects of both Pakistan and India’s locations, from trains to the streets, to the hotels, their deserts, and beaches. However, the writing by Michael Winterbottom is inconsistent. The character motivations are unclear for too long and thus outlive their welcome. Dev Patel certainly gives a  performance that pulls you in from the very beginning but then by the time we reach the third act, that character seems to have undergone a drastic change that doesn’t make much sense considering all that we saw come before. Hopefully, this will lead to new types of action style roles for Patel in the future because he is seriously impressive here.