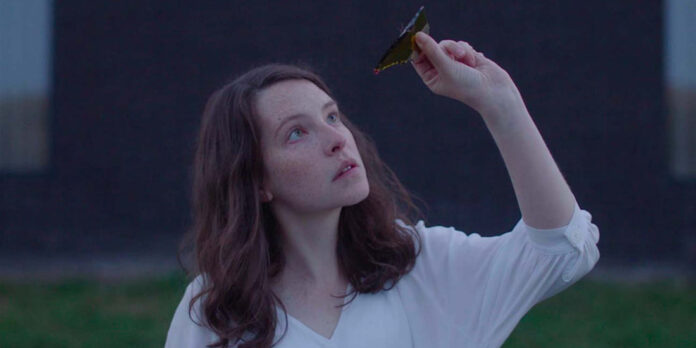 THE STORY – A wealthy family has a dinner party at its home in the Welsh mountains, hosting a local businessman and farmer who hope to broker a business deal. A mysterious young woman arrives to be the family’s waitress, and things begin to unravel.

​​The ability to hold an audience’s attention for a story that takes place in a single location can be a daunting task. A storyteller can fall into plenty of pitfalls that force rigidity onto the material that keeps it from feeling inherently cinematic. At the same time, that challenge can allow innovation, forcing creative decisions that display a unique style to make the monochromatic environments come across with vibrancy. “The Feast” is a new film whose structure features such an endeavor, and the results showcase a compelling aura of intrigue that often compensates for a weaker narrative.

Set in the Welsh countryside and spoken entirely in the Welsh language, the story centers on a dinner party being hosted by a wealthy and influential family. Cadi (Annes Elwy) is the new servant who has been brought in at the last minute to help prepare. Glenda (Nia Roberts) is the matriarch trying to balance all the elements necessary for the event, which not only includes wrangling her idiosyncratic family members together but setting the mood for what will be an important political meeting with environmental consequences. However, as the night goes on, a mysterious presence is in the air as Cadi starts behaving suspiciously. The uneasiness only intensifies as the hours pass, soon revealing a darker secret that every participant must face.

Lee Haven Jones makes his directorial debut here, and it’s quite an impressive feat. The aesthetics are arresting, with the stark imagery and compositions lending themselves well to the constant atmosphere of dread that infects every moment. The peculiar framing works in tandem with the off-beat, absurdist sensibilities of the tone. This allows for the enticing set-up to unfold the engaging mystery, with dry wit coming through as well. It can sometimes be a bit frustrating wading through the slower parts as more information trickles in, but the pacing is hardly aggravating for long stretches. Jones manages to exude a captivating approach through the filmmaking, also helped by the unsettling score and the effective sound design.

The screenplay from Roger Williams delivers slightly more mixed results. The premise has much potential for revealing some fascinating commentary inside a horror-thriller mashup. Still, it often fumbles the obvious political critiques by being quite surface level in its commentary. The plot is also separated by needless chapter breaks that only halt momentum and disrupt the natural flow. By the time the third act arrives, the story descends in a chaotic procession of events that loses the impact that the small-scale horror was previously able to achieve. The ending, unfortunately, loses the grasp of what made the preceding events so effective, and the film devolves into a violent eruption that trades engrossing, layered storytelling for spectacle.

Elwy brings a mischievous quality to her performance that makes the character shroud in alluring secrecy that is waiting to pounce. The emotional connection is designed to be at arm’s length, which often means her portrayal is only felt so deeply. Still, she delivers an absorbing turn that’s quiet yet intense. Roberts also does exceptional work as she inhabits a woman whose own mental state starts to deteriorate throughout this fateful night, and her screen presence embodies warm and cold calculation to make her a layered individual. Most of the supporting cast is merely serviceable, and while they fit the spirit of the piece overall, they don’t come close to maintaining the staying power quite like Elwy and Roberts.

The construction of “The Feast” from a story perspective is not always sound. The script indulges in shallow thematic allusions and weak characters, all of which are only exacerbated by a finale that loses control of its focus. However, the strength of the filmmaking goes a long way in sustaining the tension in the air, and the piece becomes an inviting spectacle that keeps one invested. The headline performances are also stimulating, even if the rest of the ensemble doesn’t match their contributions. While imperfect, the film does manage to create an expression of interest in this confined space – that’s a lot more than can be said for many other works of similar nature.