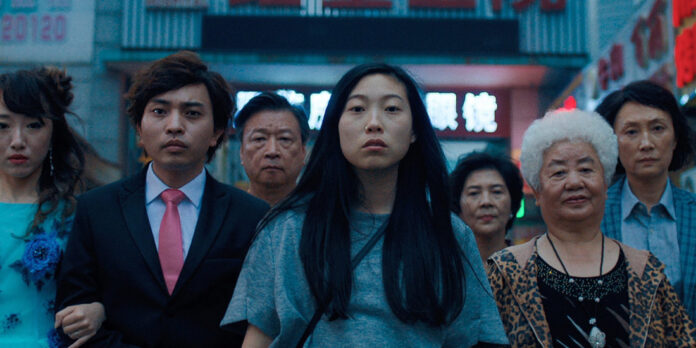 THE STORY – Billi’s family returns to China under the guise of a fake wedding to stealthily say goodbye to their beloved matriarch — the only person that doesn’t know she only has a few weeks to live.
​
THE CAST – Awkwafina, Tzi Ma, Diana Lin, Zhao Shuzhen, Lu Hong & Jiang Yongbo

Lulu Wang is not a new filmmaker who just arrived on the scene. She’s been making music videos, documentaries and shorts for years and made her directorial debut in 2014 with the film “Posthumous.” However, her second feature will get many to finally notice what a tremendous talent she is, as she bares her soul into every single moment of “The Farewell.” Based on a short story published by Wang in This American Life about her own family’s attempt to hide their grandmother’s illness from her, “The Farewell” draws a strong connection from its audience due to its characters, its moral values and our own innate desire to not let our loved ones go.

“Based on an actual lie,” the story centers around Billi (Awkwafina), a young English speaking Chinese woman living in modern-day New York City. One day, she receives news from her family in China that her Nai Nai (Zhao Shuzhen) is very sick and is going to die soon. Her family is telling her this heartbreaking news but does not want Billi to physically come to China to say goodbye to her grandmother because they have chosen to not tell Nai Nai that she has very little time left and they’re worried Billi will accidentally reveal the secret. They would rather bring the family together and celebrate moments of joy (including a fake wedding between Billi’s cousin and his girlfriend) and allow Nai Nai to live her final days in peace without the knowledge of her impending death. It’s a cultural decision that the family strongly believes in, but it leaves Billi conflicted, as she ignores her parent’s wishes, and flies to China to say farewell to her beloved grandmother.

Striking one of the best balances between comedy and drama that I can recall in recent memory, “The Farewell” can coast between being as equally grim as it can be uplifting and joyful. While the family is distraught over knowing the information that their beloved Nai Nai is sick and will soon be dying, the strong matriarch of the family is full of life, energy and exuberance at every turn, making her impending demise all the more unfortunate and the resistance of the family showing their grief all the more fascinating. Zhao Shuzhen steals the movie at every turn, not knowing that something is wrong and gives us a glimpse into a life that makes us sorrowful that it will soon be ending due to her vibrancy and unconditional love for Billi and the rest of her family.

Awkwafina delivers what is easily her best performance yet, as an Americanized Chinese woman, constantly on the verge of spilling the beans to her grandmother about the family’s secret and barely emotionally holding it together herself. There is a tenderness that weaves its way through her performance that is fragile and consistently surprising us at every turn, as she continues to find more depth and conflict in the character. That conflict comes from the tug of war to live a life for one’s self (which is the Americanized way of living) or to live a life for one’s family (the values presented in her native China). It is one of the central themes of the film and it creates a deeply empathetic experience that is central to the immigrant experience but can also be understood and felt by all.

Lulu Wang’s control over tone and her ability to sprinkle relateable moments of conflict, which we can all deeply empathize with, is “The Farewell’s” greatest strength. However, the praise does not stop there. This is one of the year’s best films and deservedly so, due to the care that Wang puts into every element of the production, from the writing to the directing and more. The entire ensemble all play their roles remarkably well, never committing a false note in their performances and all are perfectly in synch with one another, allowing for every cast member to stand out. Zhao Shuzhen is clearly the highlight but there are also strong turns from Tzi Ma and Diana Lin as Billi’s father and mother, who each impart wisdom, knowledge, heartache, and laughter onto Billi and to the audience.

Lulu Wang also does a lot to make “The Farewell” aesthetically pleasing as well. Every shot is super well composed, conveying a spatial relationship between the characters and revealing more about them to us through Wang’s framing. The music is also breathtakingly beautiful at times. Towards the end, it pulls on our heartstrings leading to a final moment that did not leave a dry eye in the theater. However, in a pleasantly surprising way, Wang’s film left us all with smiles on our faces, reminding us that life is filled with up’s and downs, and it’s all about the ones we love, who get us through it and make it worth living.