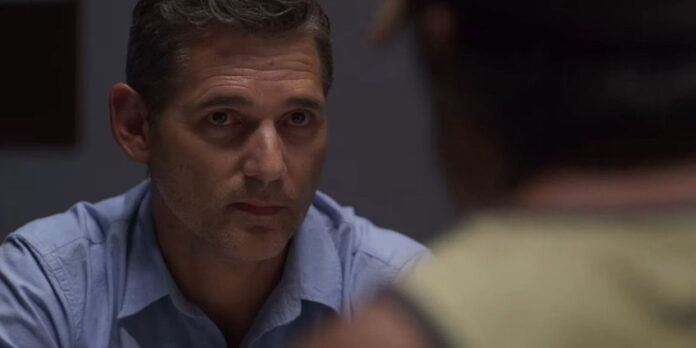 THE STORY – Aaron Falk returns to his drought-stricken hometown to attend a tragic funeral. But his return opens a decades-old wound – the unsolved death of a teenage girl.

​​​You don’t realize just how important water is until you go nearly a year without a drop of rain – and the fictional Australian town of Kiewarra is starved for it. A cracked, dusty terrain surrounds the area for miles. Once bursting with water, the river no longer exists; in its place is a dried-up riverbed. The trees also can cause catastrophic damage if a fire were to start (just last year, Australia saw millions of acres destroyed due to wildfires). The heat and desperation can make people do some terrible things, and this town has seen some terrible tragedies.

It’s been 20 years since federal agent Aaron Falk (Eric Bana) was last in his hometown, but he’s returned to attend his childhood friend’s funeral. Luke (Martin Dingle Wall) allegedly killed his wife Karen and son Billy in their home before shooting himself in a field. The residents are in disbelief, and Luke’s parents are convinced he didn’t do it. While he’s in town, Luke’s parents persuade Aaron to investigate the case.

At the same time, we get a glimpse into why Aaron has stayed so far away from Kiewarra. Twenty years ago, his childhood friend Ellie (BeBe Bettencourt) was found dead in the once flowing river. Aaron was the main suspect, having given Ellie a note that day asking her to meet him at the river, but she never showed up. The more time he spends in town, the more pent-up anger is shown Aaron’s way by residents, but he continues to claim he’s innocent. If that’s the case, what really happened to Ellie?

The story audiences are presented with is nothing we haven’t seen before – the protagonist comes back to their hometown to face the people and demons of their past. “The Dry” does that with our suave agent to a T. There are times, as its name suggests when the story runs a bit dry. Aaron and inexperienced police sergeant Greg Raco (Keir O’Donnell) spend most of the film speaking to potential suspects and gathering leads and information. Sure, that’s what all law enforcement officials have to do if they’re investigating a possible homicide – and if that’s what your movie is all about, you’ll have to show those moments – but sometimes those scenes really drag. Often you’re left wondering if anything relevant came from them. And since you can likely assume the mystery will be solved, you might not even care a whole lot about the journey.

The ending, however, is where the film really takes off. Even if you had a potential conclusion in mind regarding the alleged murder-suicide case, you’ll likely be surprised by where the trail leads. Additionally, Aaron still wants to know what happened to Ellie the day her body was discovered. After seeing how close the two were during their teenage years and seeing what the fallout was like for Aaron, you’ll likely get more invested in that story and want to know what happened as well. The clues are there along the way, but the film still finds a way to shock you with both revelations.

Bana plays the cool, calm, and fairly collected federal agent perfectly. He clearly stands out in the town, as he’s supposed to as this apparent outsider, and gives a soulful and reflective performance that stands as his best in years. Other characters, such as Greg or Gretchen (Genevieve O’Reilly), another childhood friend, provide more insight into the town and how people regard each other and the past. Some characters are quite two-dimensional, though, playing the typical “town bullies” who have been waiting to harass Aaron for 20 years.

“The Dry” takes a while to get going but still finds ways to surprise its audience as two stories simultaneously unfold. That’s the best anyone can hope for with a mystery/drama/thriller, and most people will be able to enjoy this Aussie tale.