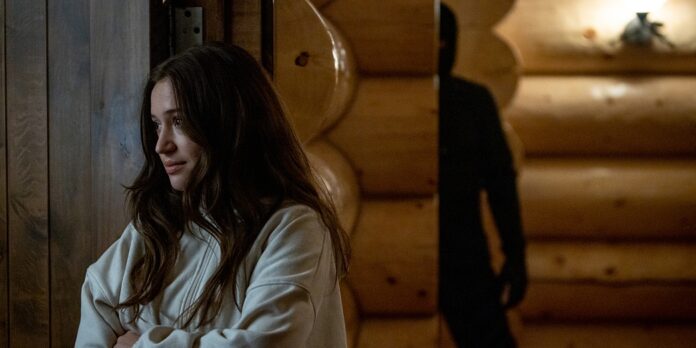 THE STORY – Due to the pandemic, Parker and her best friend decide to quarantine at the family lake house alone – or so they think.

It was only a matter of time before a COVID-set slasher film was made. After all, the tenets of the genre aren’t far off from the precautions that were taken during quarantine – masks are usually involved, the locations are often isolated, and if you’re the final girl, the best thing to do is to keep as much distance as possible between yourself and the killer. “Sick” is exactly the kind of quarantine-era horror film we can likely expect more of in the future. It comes from the writing team of Katelyn Crabb and the legendary screenwriter of “Scream,” Kevin Williamson. With his name in the credits, horror fans are sure to gravitate toward this film. They’ll likely be satisfied with what they find – namely, an effective slasher film that keeps the tension tight and the killer menacing, with a dash of social satire. Unfortunately, as soon as once-topical commentary becomes the film’s focus, “Sick” takes a turn into a more frustrating mode.

Like everyone in the spring of 2020, Parker (Gideon Adlon) and Miri (Bethlehem Million) find their lives interrupted by the aggressive spread of COVID-19. Putting their lives on pause, they retreat to Parker’s remote family lake house to quarantine in style. However, it soon becomes clear that they’re not as isolated as they think, as a masked invader arrives for a very non-CDC-approved visit.

Slasher fans are guaranteed to be perfectly delighted by what “Sick” offers in that realm. Namely, a large stretch of the film’s middle section is an extended stalking-and-hiding sequence between the main characters and the knife-wielding killer. It’s precisely the kind of tense, well-directed set piece that indicates an appreciation for the horror genre coming from behind the camera. The film builds to this sequence by forewarning the audience of the killer’s presence through several scenes where he’s shown out of focus behind the unaware main characters, with little done on the filmmaker’s part to indicate the menacing figure. Director John Hyams effectively visualizes the worst fears we all feel when we’re home alone on a dark night.

Unfortunately, the chill-inducing fun comes to a screeching halt in the film’s latter portion. Once the characters start speaking in overly explanatory, obvious dialogue, “Sick” goes from thrilling to tiring. An attempt is made to position the film as a light satire of 2020 and the mania that it brought out in all people. However, because of which characters are most gripped by this mania, it instead comes across as a bad faith look back at that frightening time in a way that frames cautionary measures and COVID anxiety as an absurd mindset that unnecessarily impacted the nation. It’s shockingly shallow screenwriting for such an acclaimed writer as Williamson to approve.

“Sick” is sure to scratch that slasher itch that fans of the genre likely find themselves frequently feeling. If viewers can allow themselves to look past the clunky conclusion, they’ll likely have a scary good time, especially if watched with a fun-loving pod.

<b>THE GOOD - </b>An effective slasher that visualizes our worst fears when at home alone on a dark night. This compact thriller will certainly entertain horror fans.<br><br> <b>THE BAD - </b>As might be expected for a COVID-set film, the moments that involve the pandemic are frustrating to watch, especially the film's poorly executed conclusion.<br><br> <b>THE OSCAR PROSPECTS - </b>None<br><br> <b>THE FINAL SCORE - </b>6/10<br><br>"SICK"