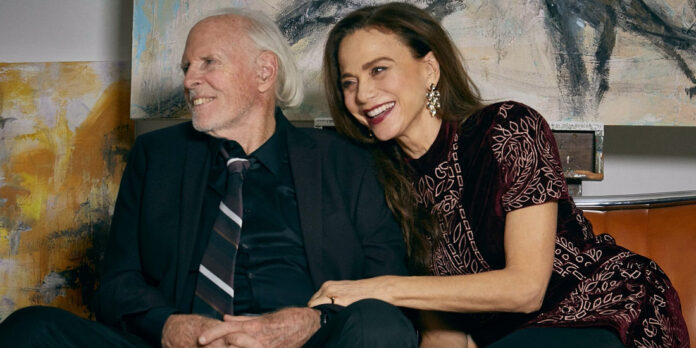 THE STORY – The wife of a famous artist tries to contact his estranged family before his dementia worsens.

​​“The Artist’s Wife,” tells the story of a woman who gave up her promising art career to aid her famous artist husband and how she deals with his diagnosis of dementia. Lena Olin stars as Claire, with Bruce Dern as her husband, Richard. It’s an interesting foray into aging and the strain that it places on relationships, as well as continuing a theme that’s been visited before: female creators who take a backseat to their male counterparts. It’s Tom Dolby’s first solo film he’s directed and while it certainly has issues, it also has some good parts.

The story begins with Richard being diagnosed with dementia and revolves around Claire’s struggle to care for him. She attempts to reconnect him with his estranged daughter (Juliet Rylance) and the precocious grandson he’s never met (Ravi Cabot-Conyers). Meanwhile, she delves back into her art which she had given up to support his work. The script, which was written by Tom Dolby, Nicole Brending, and Abdi Nazemian, struggles with pacing and perhaps takes on more than it can handle.

Audiences will inevitably draw comparisons to 2018’s “The Wife,” starring Glenn Close and Jonathan Pryce, and not only because of the similar name. It’s also about a woman who sacrifices her career for her husband’s and it’s a similarly dour film bolstered by a fantastic leading performance. I can’t imagine Olin getting anything near the critical and awards buzz that Close did, though her performance is great.

Dern plays the curmudgeonly elderly man to perfection, crafting a portrait of a once-great man who’s now grumpy and unpredictable. As his mind slips, he becomes increasingly unable to create art, and he offends and berates his students. It’s heartbreaking to watch his wife’s reactions to him and to catch tiny glimpses of the man he was before. The film never fully develops his relationship with his daughter, Angela, who he’s been out of contact with for many years. Though Claire tries to reconnect them, Richard isn’t exactly on board with her efforts.

The film is most effective in the way it portrays Claire’s world closing in on her as caring for Richard becomes more and more difficult. The film uses muted, grey-toned coloring to suggest the drabness of her existence. Olin perfectly illustrates Claire’s frustration and despair as she watches her husband’s decline. The scenes in which she calmly reacts to his erratic behavior, while making clear the wealth of emotions swirling beneath the surface, are particularly impressive.

The film is less effective in its portrayal of artists. Richard says at one point, “We paint because we have no choice.” (We do see Claire return to painting in a desperate attempt to find some good in her stifling life.) The art that we see both of them create is abstract and “modern,” but it’s clear that both have talent, though Richard’s is slipping away. A friend of Claire’s tells her that “being a woman in the art world is like being a Christian in the Roman Empire” which is a wonderful line, but it’s never fully demonstrated why.

There’s a strange romance plotline with one of the characters that feels underdeveloped and rushed, giving it no time to breathe. “The Artist’s Wife” isn’t a film that has any clear resolution at the end and it leaves the viewer feeling somewhat hopeless. But at just 90 minutes long, you could easily say it’s worth seeing just for Olin’s performance. (We all sat through “The Wife,” didn’t we?)