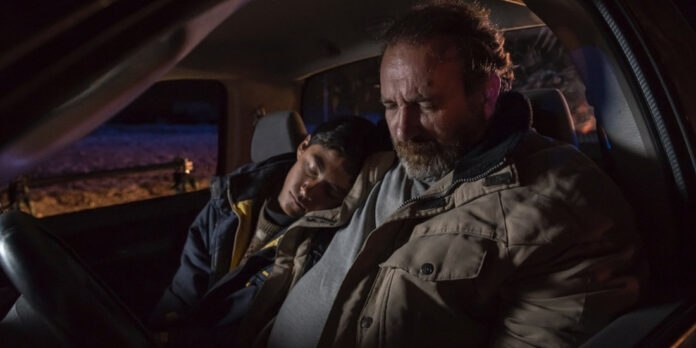 THE STORY – Hatzin, a young teenager from Mexico City, travels to collect the remains of his father, which have been found in a communal grave amidst the huge skies and empty landscape of Northern Mexico. But a casual encounter with a man who shares a physical resemblance with his father fills him with doubts and hope about his parent’s true whereabouts.​
​
THE CAST – Hernán Mendoza, Hatzín Navarrete, Elián González, Cristina Zulueta, Dulce Alexa Alfaro & Graciela Beltrán

​It’s fascinating to see where a criminal pathology stems from. Most people are happy to believe that it is a sign of a twisted mindset, perhaps to distance themselves from said lawbreakers. But, many who commit crimes do it out of necessity or under duress. “La Caja” (or “The Box”), the intimate and surreptitiously chilling new film from Lorenzo Vigas, explores the surprising ways that a life of crime can sneak up on someone. Paired with this commentary is a story about a young boy desperately wanting to make a familial connection, no matter what the character of the family member may be.

Young Hatzín (Hatzín Navarrete) is sent on an unenviable journey to retrieve the remains of someone he is told is his estranged father after he was found murdered. While making his return trip, he sees a man (Hernán Mendoza) who dramatically resembles the picture on an ID card that was found with the body. Hatzín becomes convinced that this man is actually his father and begins obsessively following him. Eventually, the supposed patriarch allows Hatzín to tag along as he does his job, which involves recruiting down-on-their-luck workers to man factories. Hatzín is slowly made aware of the corrupt and criminal goings-on at these workplaces, and he realizes that he just may have to give up his childhood innocence to have a father figure.

The way Vigas slowly reveals the unsavory elements of his film’s setting helps put the audience in Hatzín’s shoes. Just as things gradually become horrifyingly clear to him, we are also made aware of the misdeeds in small incremental steps. Therefore, like Hatzín, we too want to believe that his new father figure wouldn’t be capable of such evil acts. We especially don’t want it to be true after seeing the positive personality traits he possesses. Vigas clearly wants us to understand why Hatzín wouldn’t immediately turn and run away after the true nature of these job sites is made apparent. It is easy to judge someone for their bad choices when we only see the newsworthy results, but it is another to be with them every step of the way as they fall into a criminal underworld before they even fully realize it.

Navarrette is quite the discovery. The entire film is placed upon his young soldiers, as he’s in every scene of the movie from beginning to end. The audience never feels anything but sympathy for him, which is a testament to the pathos he brings to his performance. He gives off the appropriate impression that he’s lost and yet clearly has nothing to lose.

While the film is thematically effective in relying on its audience’s patience, it is a reasonably light narrative. Its sparseness is mostly an intelligent choice as it allows the audience to come to their own conclusions and judgments about the characters and their actions. But at times, it does feel like the film is just spinning its wheels. It’s the type of movie that is more about characters and their inner lives than explicit narrative action.

This small-scale drama is a winding journey along a young protagonist’s rocky path to an inevitably unsteady adulthood. It effectively shows the ways that corruption and poor choices can build upon each other until, before you know it, you’re in too deep, and it’s hard to see the way out.