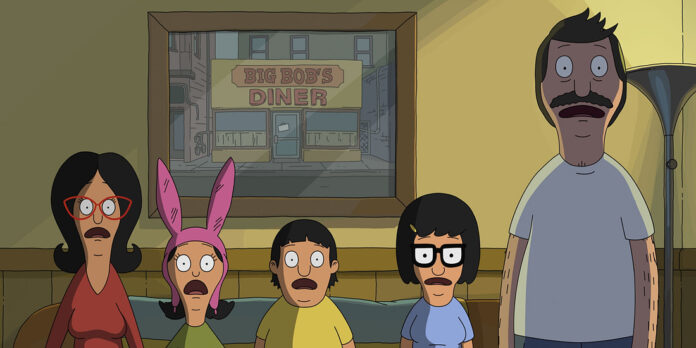 THE STORY – A ruptured water main creates an enormous sinkhole right in front of Bob’s Burgers, blocking the entrance indefinitely and ruining the Belchers’ plans for a successful summer. While Bob and Linda struggle to keep the business afloat, the kids try to solve a mystery that could save their family’s restaurant. As the dangers mount, these underdogs help each other find hope as they try to get back behind the counter.

​​​​​When it comes to adaptations, bringing television shows to the big screen is one of the trickier transfers to be made. For every triumph like “The Fugitive” or “Mission: Impossible,” there’s a “Wild Wild West” or “The Last Airbender.” The difficulty comes in transfiguring the qualities that make a TV show successful to the cinema, which inherently values and emphasizes different types of storytelling and technical aspects. “The Bob’s Burgers Movie” is the latest TV property to make the leap across mediums, bringing the five beloved members of the restaurant-running Belcher family to theaters. Smartly, the film sticks to the essential ingredients that make the show so successful – namely, the humor and well-drawn (no pun intended, I promise) characters maintain their truly special quality, even when projected on a much larger screen than that which they’re usually found.

Summer is approaching, and each Belcher family member faces their own unique dilemma as a busy season for their restaurant draws near. Parents, Bob (H. Jon Benjamin) and Linda (John Roberts), must find a way to develop some extra dough to prevent the repossession of their restaurant equipment. As per usual, Tina (Dan Mintz) is having boy troubles, and Gene (Eugene Mirman) is attempting to find new and exciting ways to advance his musical career. Louise (Kristen Schaal) is facing an internal struggle as she must come to terms with her ever-shortening childhood and the potential loss of the physical marker of that time in her life: her trademark pink bunny ear hat. However, all these individual conflicts may need to be put on the back burner when a giant sinkhole opens in front of the titular restaurant, disrupting customers’ foot traffic flow and the family’s plans.

If all of that sounds like the typical fare you’d find on the menu of any old episode of “Bob’s Burgers,” that’s because the film is basically a long-form entry of the television show. While that may make the need for it to come to theaters seem less obvious, this predictable formula is a wise choice by the film’s writers. The show always works best when it keeps its focus tight, and the film smartly doesn’t expand this scope just because the audience will be watching it in a theater rather than from a couch. On the one hand, having no arbitrary increase in stakes or scale does make the film seem less than essential as it doesn’t try to be anything other than a lengthy television episode but to deviate from what makes the show work as well as it does would be a betrayal of the foundational aspects of the television program. The animation style is similar to the TV show, with some obvious additional shadows and shading. It’s not the most stunning animation you’re likely to see in theaters, but again, to change up that trademark look would come across as an unnecessary elevation of the show’s approach.

Besides staying true to the typical structure of the television show, the most important carry-over from the TV to the movie screen is the humor. The film packs in the jokes, with nearly every other line of dialogue being given a comedic beat. The characters’ voices are strong and individualized, with much of the comedy coming from the idiosyncrasies of these animated creations’ personalities. Even when the plot takes an expected dramatic turn, the jokes don’t let up, making the entire film a riotously funny time.

Notably, whether they’ve seen every single episode of the TV show or not even one, any audience member can find enjoyment in this film. There’s no unending parade of bit players or throwback jokes to excite long-time fans, and all characters are given the briefest of introductions for context. It’s not impossible to imagine that this may be many viewers’ first foray into the world of the Belchers, and the film is as much for those audiences as it is for the completist “Bob’s Burgers” lovers.

The one aspect of “Bob’s Burgers” that has helped it maintain such a loyal following for 12 seasons is the apparent love the family members all have for each other. Underneath the jokes is an essential bond that unites the Belchers. That sincere affection comes through in “The Bob’s Burgers Movie,” proving that no matter the size of the screen, the joy of connection is what really matters.