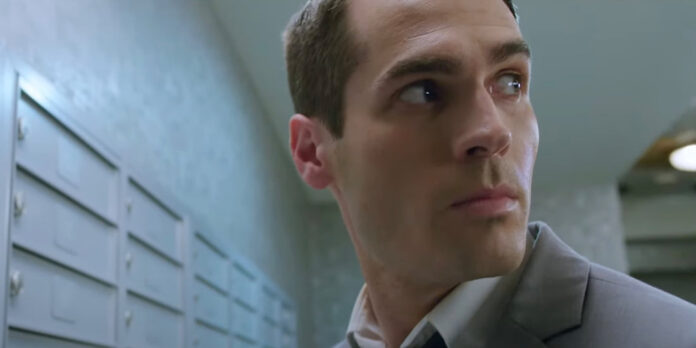 THE STORY – A married Hollywood agent receives a mysterious letter for an anonymous sexual encounter and becomes ensnared in a sinister world of lying, murder and infidelity.

It is fascinating how long specific workplace environments can sustain themselves despite the open acknowledgment of their toxicity. While so many industries have had this ideology attached to them, nowhere is it quite as strong as in the realm of Hollywood. Despite having an entire movement started to combat such nastiness, the issues remain prevalent to this day. It makes the landscape ripe for intriguing commentary, and that is precisely what “The Beta Test” sets out to accomplish. What it delivers is a compelling analysis of a broken system that is also anchored by a gripping performance from its central lead.

In the film, Jordan (Jim Cummings) is a cynical agent whose firm representing a host of writers is trying desperately to secure major clients and fight off the impending implication of irrelevancy. He is an anxious personality, trying to keep up professional appearances while planning the upcoming wedding to his fiancée Caroline (Virginia Newcomb). There is still a more adventurous part of his life that is missing, that is, until Jordan receives an anonymous note that promises him a night of pure sexual fulfillment. This sets him down a path that will expose a larger conspiracy regarding infidelity, secrecy, and digital security that will showcase much more insidious revelations.

With all the exciting elements in this film, none are quite as appealing as Cummings’s performance. There is an immediate attentiveness paid to his active face that can navigate so many heightened emotional states and be so incredibly captivating to watch. There’s an overt neurosis that he taps into that is much more nuanced beneath the surface. His portrayal feels both chaotic yet controlled, and it helps to inform how this character gains a deadly confidence that is still quite enticing to witness. It’s a great testament to Cummings and his ability to maintain such a screen presence. He towers over an ensemble that is filled with good performances, though the intentionally small presence of Newcomb does limit her impact, along with some other supporting players.

While the more unique element of Cummings’s contribution is his performance, that does not mean his directorial efforts are not accomplished either. He and co-director PJ McCabe (who also stars in the film) do an excellent job at capturing a fluidity to the filmmaking that’s apparent from the very opening minutes of the film. The stylistic flourish provides an engaging rhythm that peers into this seedy world and creates an ever-present atmosphere of dread. That momentum is quite effective until the third act arrives, at which point the revelations are not quite as amusing as to what came before. Still, this is a very well-directed piece that perfectly captures the themes it chooses to explore.

Such themes are what make the film a highly provocative satire and social commentary. The script by Cummings and McCabe sometimes feels it has a lot on its plate in terms of the material it wants to mine. This is partly why it buckles under its own weight at the end, and the tightness of the narrative begins to unravel. However, there is still so much to appreciate in its dissection of the topic of how poisonous the culture in the entertainment industry can be. The initial premise is but a springboard to illuminate the pernicious attitudes of men seizing control and their sinister attempts to force domination. It’s a striking indictment on the perspectives of such climates, and it’s a joy to watch unfold. The alluring mystery and humorous one-liners only provide more evidence of a successful screenplay.

“The Beta Test” ends up being a wildly entertaining examination of a malevolent culture, and it executes that vision with a style that is quite enthralling. The topics of discussion have a pointed relevancy that makes them attractive, and centered around a commanding performance from Cummings makes it all the more inviting. Even though the finale runs out of steam, this is still an insightful observation that makes good use out of its remarks on such subject matter. One imagines it won’t become out-of-date anytime soon, but the results are a marvel to behold.