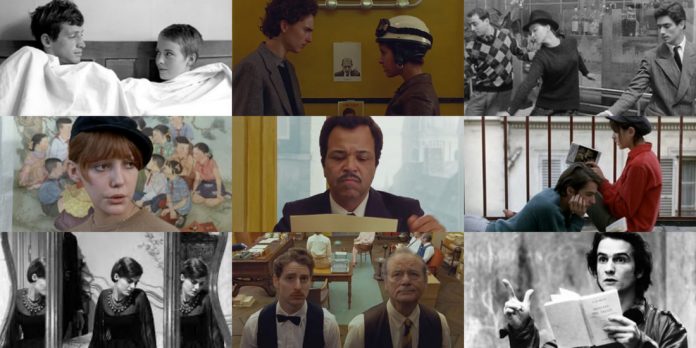 By Eve O’Dea
​
Wes Anderson’s latest feature film, “The French Dispatch,” is easily his most wesandersonian film to date, immediately ticking off all of the boxes of the idiosyncratic director’s signature style: from instantly recognizable cinematography and set design, deadpan-style performances from his familiar repertoire of actors, and even narration from Angelica Huston. Some have called his latest work, too much style and not enough substance. That may or may not be true but there is no mistaking his work from his contemporaries, and audiences can go into this film like any of his others with a certain set of expectations that will almost certainly be met. Though Anderson’s cinematic style has become so iconic as to serve as inspiration for other filmmakers, his own body of work has been informed by the century of film that came before him – particularly, and all the more emphasized in “The French Dispatch,” by the storied history of French cinema.​

Anderson’s still framing often resembles pages from a storybook, with carefully crafted set pieces defying any rules of architecture, instead of serving to satisfy our childlike imagination. Here, we can see the influence of one of cinema’s earliest, and most creative, pioneers: Georges Méliès (1861-1938). Most famous for his space exploration film “A Trip to the Moon,” Méliès handcrafted hundreds of films from fantasy, science fiction, and adventure at the turn of the century, raising the bar for the capabilities of early cinema. He was a developer of the “trick film,” using in-camera techniques to create what we now consider rudimentary special effects. Using the edges of the screen as a literal frame, Anderson values the importance of what is literally on screen rather than subtext or implication. There is a sense of magic and sleight-of-hand in his work. He abandons any laws of logic and physics to ensure the capture of his vision. In search of opulence, he draws inspiration from several midcentury directors known for creating spaces of intricacy and abundance, such as Max Ophüls and Jacqueline Audry.

The film’s midsection, titled “Revisions to a Manifesto,” is practically a direct tribute to the filmmakers of the French New Wave. France’s cinematic era from the late 1950s to the 1960s saw multiple young, primarily male, directors use their anger towards the world and the establishment to create rebellious acts of filmmaking. Perhaps most emblematic of this era is the poster child for cinematic cynicism, Jean-Luc Godard, whose unconventional editing and narrative style served as a great inspiration for the New Hollywood era of the late 1960s and 1970s. Beginning his career with stories of everyday mischief, Godard soon began to weave his left-leaning political views into his work with films like “La Chinoise,” which follows a group of Parisian young people as they contemplate Maoist ideology and violent rebellion.

In “Revisions to a Manifesto,” American journalist Lucinda Krementz, played by Frances McDormand, follows the activities of several young rebels whose subject of protest remains intentionally vague. The quasi-leader of this group is the pretentiously anarchic Zeffirelli, who employs Krementz to help write his rambling manifesto. Timothée Chalamet plays Zeffirelli with a blend of optimism, naivety, and that trademark cynicism. This serves as an obvious homage to Jean Pierre Léaud, who, after his performance as Antoine in “The 400 Blows” at the age of fourteen, would continue to serve as muse for the entire pantheon of New Wave filmmakers. At Zefferelli’s side is his girlfriend and primary dissenter Juliette, played by Algerian-French actress Lyna Khoudri, whose fury and determination blended with a wide-eyed hopefulness call to mind fellow Godard muse and Léaud co-star Anne Wiazemsky. In her own way, McDormand arrives as a modern Jean Seberg from Godard’s “Breathless” – an American observing the action from the sidelines who watches her lover die with apathy. There are frames in this section of the film that might have been taken directly out of a Godard or Truffaut feature as characters discuss a war beyond their comprehension, write political manifestos in bed, and discuss the imperialist implications of pop music. As Zeffirelli and Juliette lean against a jukebox in a crowded cafe, I practically expected them to start doing the Madison.

Throughout the “The French Dispatch’s” runtime, countless scenes, moments, and inflections revealed Anderson’s fondness and respect for various eras of French cinema. Whether it was the reference of the prison-set works of Robert Bresson and Jaques Becker, Léa Seydoux’s effortless likeness to New Wave actresses Anna Karina and Jeanne Moreau, lampooning the wealthy and elite like Jean Renoir and Luis Buñuel, or Jeffrey Wright’s touching performance as a James Baldwin-adjacent world-weary food journalist, Anderson overtly demonstrates his understanding of his sources, thus showing his love for his inspirations loud and clear. Subsequent rewatches will undoubtedly reveal many rewarding observations and connections in the future as the film continues to be studied and analyzed in Wes’s filmography.

Have you seen “The French Dispatch” yet? If so, what did you think? How many French cinema references were you able to spot? Let us know your thoughts in the comments section below or on our Twitter account.