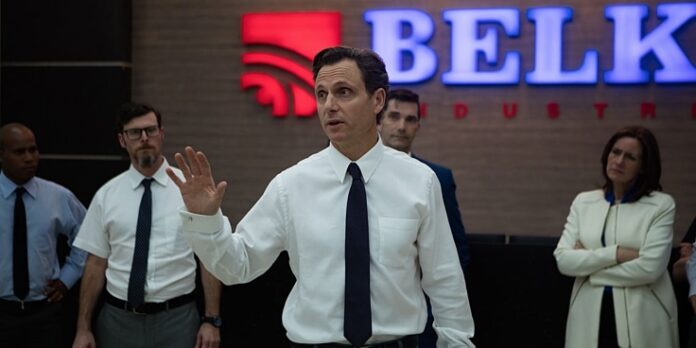 THE STORY – An ordinary day at the office becomes a horrific quest for survival when 80 employees (John Gallagher Jr., Tony Goldwyn, Adria Arjona) at the Belko Corp. in Bogotá, Colombia, learn that they are pawns in a deadly game. Trapped inside their building, a voice over an intercom tells the frightened staffers that two workers must be killed within 30 minutes. When another ultimatum follows, friends become enemies and new alliances take shape, as only the strongest will remain alive at the end.

Have you ever wanted to kill your boss? Have you ever felt that your boss has wanted to kill you? Well, in writer and producer James Gunn’s (“Guardians Of The Galaxy”) film “The Belko Experiment” directed by Greg McLean (“Wolf Creek”), those wishes come true and then some. If any film this year embraces the word carnage to its very core, it’s this one. “The Belko Experiment” gives genre fans exactly what they’re looking for in terms of mayhem, gore and the ranges of human emotion. However, its one major miss is its brain. With so much death, one can only take so much before they have to ask, “What does it all mean?”

It’s just another day the office for the employees of Belko, a non-profit government company with an office in Columbia. Secluded from the nearest town and under heavy guard, the 80 employees come into work unaware that this day will not only be their last day at Belko, but also their last day alive. A mysterious voice over a loudspeaker warns the workers within the building that many of them will die if they do not kill their co-workers. Mike Velch (John Gallagher Jr.) is trying to act as the compassionate voice of reason, while tensions build, which forces Belko COO Barry Noris (Tony Goldwyn) to make some tough choices. As time passes and the body count rises, the workers start to wonder if they will ever outsmart those who are controlling this sick game and come out of this alive.

It’s a shame really that “The Belko Experiment” checks its brain at the door (Or in this case, leaves it outside of the building entirely). It has an intriguing premise that touches upon the very basis of human instincts, survival. It explores this with logic, reason, compassion and unmerciful aggression. With so many players caught within this diabolical trap, it gives Gunn a chance to write as many voices of reason as possible. Unfortunately, that’s all that the characters ever come off as. No one is truly fleshed out except for maybe John Gallagher Jr.’s Mike Velch and Tony Goldwyn’s ruthless COO, Barry Noris. And those are hard maybes. Instead of exploring the themes of the story deeper, outside of showing how human beings will do anything to survive or adding subtext to the plot, we instead get a grizzly gore-fest that would make Asian horror cinephiles proud of its attempt to be the next “Battle Royale.” Now, mind you, this is no “Battle Royale.” The concept here is not original and there are many people who will be turned off by its meaningless violence devoid of anything to say. However, for true genre fans this is a wild thrill ride that does not let up during its brief 88-minute runtime that is until the final scene of the film where the plot takes a turn for the worse. Questions are left unanswered, paths which the story could have taken are not explored and all we’re left wondering about is what it says about us if we took enjoyment in the preceding 80 minutes.

“The Belko Experiment” will have its fans within the “torture porn” crowd. Those who get gleeful entertainment out of witnessing a high body count is in for an intense hour and a half of madness. This does not make “The Belko Experiment” good when all is said and done. For as much fun as the carnage may be, at a certain point, you have to drive it all home with a message or commentary on society that is deeper than something we already know is a given. “The Belko Experiment” gives us that predictable message. A combination of such a letdown and its botched ending undoes what all came before resulting in a film that is sick, twisted and does not earn its violent sadistic nature.