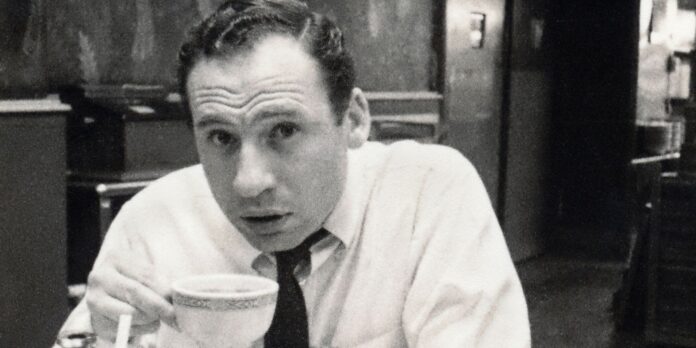 THE STORY – Documenting Horn and Hardart’s iconic Automat, one of America’s original and most popular restaurant chains in NYC and Philadelphia.

Many (many) years ago, when I was a little boy, I went on a trip to New York, and my aunt took me to have lunch at the automat. I had never seen anything like this place. When I first saw those rows of little windows which displayed a variety of delicious-looking food, I was just mesmerized. I dropped my coin in a slot, turned the handle, and out popped a piece of coconut custard pie, quickly followed by my hot chocolate, which came out of a spigot shaped like a dolphin head! I was hooked. New York could keep its Statue of Liberty, thank you very much. I wanted to spend my day at the automat. I’ve never forgotten that sense of wonder I felt when I first saw the automat, a feeling that director Lisa Hurwitz has beautifully captured in her history of this beloved restaurant in her film, aptly titled “The Automat.”

The documentary’s story, which was a favorite at film festivals earlier in the year and is now streaming on HBO Max, is first set in Philadelphia, where partners Joseph Horn and Frank Hardart operated a chain of successful bakeries. On a trip to Germany, Hardart was introduced to the concept of automatic restaurants, an intriguing idea that he promptly imported back home. Their first “automat,” as it was termed, opened in 1902 and proved to be so successful that the pair soon brought automats to New York City.

Horn and Hardart laid down two rules by which the company lived by. The first was to treat everyone well, both the customers and staff, a policy that engendered enormous loyalty from its employees and one that stood the company in good stead when labor unrest hit other companies later. The second was that the food they served had to be good and it had to be fresh. To do that, the food was prepared at a nearby central commissary, with meals and pies baked that morning. They were then placed on delivery trucks to the more than 40 New York automats. It was an ingenious and unbeatable business model.

With the economy growing, office workers soon poured into the automat every workday for a quick and inexpensive lunch, where they dined with all classes of people. In fact, the automat became part of the process of Americanization for many immigrants who landed on New York shores. For one thing, you didn’t have to know English to dine at the automat. If you saw a sandwich and had a nickel, you had lunch. And, most lastingly, you were treated with the same courtesy and respect as any American around you, a policy that engendered in them a genuine feeling of belonging.

As the popularity of the automat soared, the restaurant began to pop up in movies of the time. Irving Berlin partially set his 1932 musical “Face the Music” there, with Park Avenue swells, dining at the automat and enjoying its food and unique atmosphere. The musical was so influential, in fact, that real-life matrons in furs began to show up in automat dining rooms, rubbing shoulders with the lower classes, sharing a 5-cent cup of coffee together. That was a moment when the automat became perhaps the nation’s most perfect example of democracy in action and offered a moment of optimism at what a bright future might be like.

It was not to last, of course, as forces — some over which the company had no control, others of their own making — precipitated the decline of the automat throughout the 1970s and ’80s until the final restaurant closed in 1991. Hurwitz handles the end of the automat with the kind of loving respect that the company’s history deserved. Except for a few scrap parts, all that’s left of the automat, she argues, are its memories.

And memories are where the meat of “The Automat” lies, as Hurwitz has collected a wide array of testimonials — some from celebrities, others everyday folks — to fondly share what the automat meant to them. And those of us who have longed to see Mel Brooks and Ruth Bader Ginsburg together in the same movie need to wait no longer. Both cultural icons have very different memories, of course, but each shared the same love for the automat, as did the film’s Colin Powell, Elliott Gould, Carl Reiner, and Howard Schultz, Chairman of Starbucks, who modeled his dining rooms with the same democratic seating as the automat.

Throughout, Hurwitz never hides the fact that she’s a filmmaking novice, relying heavily on the help of others — specifically Brooks, who was there to encourage her every step of the way. When she couldn’t afford the rights to Berlin’s “Let’s Have Another Cup of Coffee,” Brooks stepped in and provided her with a lush romantic score (rare for a doc) by Hummie Mann, who scored Brooks’ last two features. He even wrote and performed for the film an original song entitled “At the Automat,” which is pure Mel and pure joy.

Compared with the weighty issues of many recent documentaries, “The Automat” might seem to be a slight chronicle of a moment in time. But with her film, Hurwitz takes the time to skillfully argue that the automat, with its appeal to all classes of American life, served as an important part of American history in the 20th century, both culturally and socially.

<b>THE GOOD - </b>Lisa Hurwitz's documentary transcends the profile of a legendary restaurant chain to become a snapshot of a time in New York life when class distinctions disappeared when both the rich and poor could sit at the same table and enjoy a 5-cent cup of coffee together.<br><br> <b>THE BAD - </b>There is a limitation to what the film can cover because it is, after all, a movie about a restaurant.<br><br> <b>THE OSCAR PROSPECTS - </b><a href="/oscar-predictions-best-documentary-feature/">Best Documentary Feature</a> & <a href="/oscar-predictions-best-original-song/">Best Original Song</a><br><br> <b>THE FINAL SCORE - </b>7/10<br><br>"THE AUTOMAT"