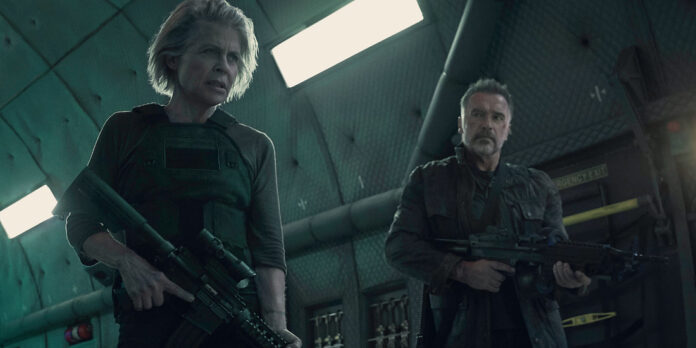 ​​​​​”The Terminator” is one of the greatest science fiction films of all time. “Terminator 2: Judgment Day” is one of the greatest action films of all time. Once James Cameron stopped being involved with the franchise, all other entries have had to live up to these two beloved films and the results were disastrous. Now, with James Cameron back as a producer, “Terminator: Dark Fate”  totally disregards the events of “Terminator 3: Rise of the Machines,” “Terminator: Salvation” and “Terminator: Genysis,” and acts as a direct sequel to “Terminator 2: Judgment Day.” The result this time is a much better film than the other three sequels but it still cannot live up to the iconic status of the first two films.

Taking place 27 years after the events of “Terminator 2: Judgment Day,” a new Terminator threat (Gabriel Luna) is sent from the future by Legion (not Skynet – as that future was indeed prevented in “T2”) to kill Dani Ramos (Natalia Reyes) in Mexico City. Sent to protect her is a human soldier named Grace (Mackenzie Davis) who has been “augmented” using machine technology, granting her bursts of increased, speed, strength and other capabilities that the Terminator possesses. While on the run, the two cross paths with now “terminator hunter” Sarah Connor (a returning Linda Hamilton) and the original T-800 Terminator (Arnold Schwarzenegger returning to the role that catapulted him to Hollywood stardom at the request of James Cameron for this sixth film). Facing incredibly difficult odds against an enemy that can’t be killed and only outrun, Dani, Grace, Sarah, and the Terminator fight to stay alive against the Rev-9 and hopefully, keep this new future alive.

Beginning with footage of Sarah Connor from “Terminator 2: Judgment Day” over the opening logos, director Tim Miller’s (“Deadpool”) entry into the franchise relies heavily on our nostalgia for that classic action film, as it hopes to earn our respect by mixing the familiar with the new. It has a similar practical effects-driven car chase sequence on a freeway. It ends in a setting that is heavily industrial with elements of fire. It touches on similar themes as the first two films did (while awkwardly restating famous quotes of dialogue from those films as well). And it features two of the most prominent members of the cast.

The returning presence of Linda Hamilton, (who at 63 is still just as badass as ever), is a pure adrenaline rush of joy. Despite some god awful lines of dialogue she is given (Cheesily stating the classic “I’ll be back” line or forcibly conveying how Legion only wants to kill Dani for the man she will one day carry in her womb), Hamilton reminds us of how tough, transformational and downright awesome she still is. The same goes for Schwarzenegger, who comfortably slides back into the robotic role that played to the actor’s strengths during the peak of his Hollywood career. Now, you can tell he’s having more fun with the role despite its limitations, as a part of this movie revolves around the machines trying to be more human. The same goes for Hamilton, whose tough exterior and disciplined lifestyle could be considered machine-like. As the film progresses, much of the journey is about that character re-discovering her inner-humanity again.

As far as new additions to the cast are concerned, Mackenzie Davis is a true standout. Agile, hard-hitting, commanding and with a steely-eyed look that could throw your guard off, Davis gives us a character worth rooting for. More human than machine, with real feelings, desires, and needs (she continuously needs injections of meds in order to highly function), Grace is a character who did not disappoint and gave this film a new element that made the original Terminator concept feel fresh. Natalia Reyes does an admirable job as Dani, but she doesn’t really come into her own as a fan favorite until the third act. For most of the movie, she’s saddled with being in the background while the more battle seasoned warriors go to work. However, when the time comes for Dani to take charge of her own life as much as she does for her family, Reyes comes alive with a fire and believability that is extremely likable and inspiring. In short, the women of this movie absolutely rule!

Miller’s action is incredibly hard-hitting, effectively using slow-motion techniques, with lots of explosions and methods of transportation to keep things dynamic and exciting. “Terminator: Dark Fate” rarely slows down. However, when it does, that’s when the biggest flaw of the film reveals itself. For all of the good this movie does in terms of its story, the dialogue can be quite laughable at times. The story follows the rule of “if it ain’t broke, don’t fix it,” as it keeps the basic story of the Terminator franchise to its core while changing the setting and adding enough subtle changes to make it feel new but familiar. However, when characters take a moment to catch their breath and they start talking, that’s when the mission becomes critical.

Machines will hopefully never replace humanity and “Terminator: Dark Fate” goes to stronger lengths than its last three predecessors to ensure that there is a healthy dose of humanity to carry us through a tired and beaten to death storyline. The cast are all up to the task from a physical standpoint and in the hands of director Tim Miller, some of the action is quite exhilarating at times. However, this true sequel to James Cameron’s first two films never quite reaches the heights those first two films achieved. And what possibly could? Heading in with low expectations, “Terminator: Dark Fate’s” fate never had to be that dark but it’s not quite that bright either.