Ten Upcoming Documentaries To Keep An Eye On This Oscar Season 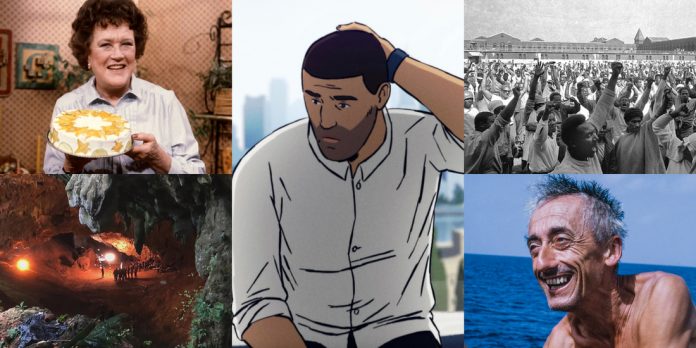 ​​As the nation’s leading theater chains began to lure back audiences with a string of studio-backed tentpoles early this summer, arthouses took a much different approach, relying on a slew of documentaries, most of which were celebrity-driven, to lure back older audiences. In the past few months, we have seen such notable works as “Roadrunner: A Film About Anthony Bourdain,” “Val” about actor Val Kilmer, and “Rita Moreno: Just a Girl Who Decided to Go for It,” as well as documentaries on choreographers Alvin Ailey and Bill T. Jones. So, amidst all of these new documentaries, it stands to reason that any good Oscarologist would naturally turn to what it all means to the upcoming Oscar race for Best Documentary Feature.

Among documentaries already released in theaters, a consensus is beginning to form that only three films have a real shot at an Oscar nomination…

“Summer of Soul,” Questlove’s acclaimed directorial debut, which won both the Grand Jury Prize and the Audience Award at this year’s Sundance Festival, may just be the film to break the category’s 51-year absence of music performance docs in this category, primarily due to the insightful context about the Harlem community that Questlove utilizes to tie the on-stage performances together.

Edgar Wright’s “The Sparks Brothers“ faces the documentary branch’s often-ambivalent feelings toward show-business profiles, but what makes Wright’s film, which played both at Sundance and SXSW, stand out from the pack is the imaginative way in which the story of the band Sparks unfolds, utilizing not only the now-familiar talking heads but even animated commentary as well. It’s a breath of fresh air in the genre.

“The Lost Leonardo“ is a doc that solves a mystery, a genre that Academy voters have happily lapped up in the past. The tale of how an $1175 painting found in a garage is eventually thought to be a missing Leonardo Da Vinci and auctioned off for $450 million is likely to be catnip for Academy voters despite the film’s once-discouraged use of recreations in telling this story of who, what, when, why and for how much. It checks all the Oscar boxes.

With that, it appears that most of the prime contenders in the Oscar race for Best Documentary Feature are likely to be found in the (mostly North American) film festivals being held throughout the fall. The program lineups for the Toronto and New York festivals are set mainly with an array of promising documentaries ready to premiere. However, one of the most influential festivals, Telluride, will continue its tradition of announcing its film selection until just before the festival begins on September 2, but that hasn’t stopped film experts from hazarding their best guesses as to what docs will be a part of the five-day Colorado fest.

Looking over the festival documentaries announced so far, ten documentaries may have the stuff to withstand the long march ahead to Oscar based on their pedigree, subject matter, and the number of festival invitations. I’ve listed each festival at which a particular film will play. For Telluride, I’ve only listed those films widely considered to be screened there and note that with italics and an asterisk.

So, before the fall festivals begin, here are ten documentaries that you should put on your Oscar radar…

“Flee” (Sundance/Telluride*/Toronto/New York) – Jonas Poher Rassmussen’s “Flee,” winner of the Grand Jury Prize (World Cinema Documentary Section) at this year’s Sundance Festival, uses animation to tell its remarkable story and to disguise the identity of its subject, a real-life gay Afghani refugee, and his treacherous escape to freedom in the West. With rave reviews from Sundance, “Flee” is in the unique position of scoring a hat trick with potential Oscar nominations in the Documentary, Animated, and International Feature categories, with even a historic Best Picture nomination not out of the question.

“The Velvet Underground” (Cannes/Telluride*/New York) – In his first feature-length documentary, director Todd Haynes takes many of the skills from his narrative work (particularly “Velvet Goldmine” and “I’m Not There”) and applies them to this portrait of the avant-garde rock band The Velvet Underground. Using extensive archival material as well as contemporary commentary, Haynes not only captures the artistic highs and the squabbling lows of Lou Reed and company, but the doc also captures their unique place in the New York cultural scene in the late 1960s and early ’70s.

“The Rescue” (Toronto) – Whereas directors E. Chai Vasarhelyi and Jimmy Chin looked to the sky for their last film, the Oscar-winning “Free Solo,” for their latest doc, “The Rescue,” their cameras go deep underneath the earth to capture the famed rescue of a Thai soccer team that was trapped in a cave for 16 days. While the happy result of the rescue attempt is widely known, there was no guarantee at the time that the European and Thai rescuers would find those trapped or whether they would ever get back alive themselves. The filmmakers’ cameras were there with them every step of the way.

“Three Minutes: A Lengthening” (Telluride*/Toronto) – Bianca Stigter’s documentary examines a three-minute piece of film shot by David Kurtz in 1938 of the small Polish town of Masielsk. The smiling faces of the townspeople in the color footage will soon disappear as the Holocaust wipes the town and its inhabitants off the face of the earth. Stigter imaginatively edits the footage to last more than an hour, focusing on the stories contained within the home movie in an effort to figuratively prolong their lives. If we are still watching, the film posits, then history is not over yet.

“Attica” (Toronto) – Thanks largely to its mention in “Dog Day Afternoon,” most people have at least heard the name Attica. Still, I would wager that few people can recall just what sparked that notorious prison uprising half a century ago. Emmy winner Stanley Nelson (“The Murder of Emmett Till”) not only uses footage of the time to tell the story of the rebellion, the largest and deadliest in US history, but also utilizes contemporary perspective from experts who place the many issues raised by the uprising – race, politics, power, and the criminal justice system – into important historical context.

“The Devil’s Drivers” (Toronto) – Some documentaries have the feel of a narrative film – a mystery, perhaps, or even a romance. Mohammed Abugeth and Daniel Carsenty’s “The Devil’s Drivers” has the feel of a 1970s car chase movie, as their film follows two Beduin drivers as they try to help Palestinian workers by smuggling them at a high rate of speed across the Negev Desert to get to the Israeli border. The filmmakers shot footage over five years to capture the daring of the drivers in a part of the world where the threat of danger has never gone away.

“Becoming Cousteau” (Telluride*/Toronto) – Two-time Oscar nominee Liz Garbus (“The Farm: Angola, USA,” “What Happened, Miss Simone?”) utilizes never-before-seen footage from the archives of the legendary undersea explorer and filmmaker to chronicle his remarkable life. From co-developing the Aqua-Lung breathing apparatus that helped to popularize deep-sea diving to winning the Palme d’Or for his 1956 documentary “The Silent World” to, most significantly, warning the world decades ago of the oncoming threat of climate change.

“The First 54 Years: An Abbreviated Manual for Military Occupation” (Berlin/Telluride*/New York) – Documentarian Avi Mograbi, with the help of 38 Israeli soldiers, takes us through, in a step-by-step manner, just how the Israeli government plans to annex the nation of Palestine permanently. Mograbi offers no emotional pleas but instead simply lays out the facts as he sees them, an approach that early Berlin reviews cite as even more chilling. Riding solid reviews out of Berlin, Mograbi’s film is poised with these influential fall festivals to land an even greater impact.

“Julia” (Telluride*/Toronto) – Filmmakers Julie Cohen and Betsy West, who were Oscar-nominated for their popular doc “RBG,” focus on another American icon, Julia Child, chronicling the extremely colorful life of the legendary chef. Sony Pictures Classics is releasing, which should be a plus for its awards prospects. Cohen and West actually have two chances at a nomination this year with this film joining their acclaimed doc “My Name Is Pauli Murray” (Sundance/AFI DOCS), a moving portrait of the life of the lawyer, activist, and non-binary pioneer that is also squarely in the awards hunt.

“Blood Brothers: Malcolm X and Muhammad Ali” (Telluride*) – Inspired by the book by Randy Roberts and Johnny Smith, “Blood Brothers” focuses on the friendship that developed between the two legendary icons in the 1960s, a bond that was recently dramatized in Regina King’s “One Night in Miami.” Though it was no secret that the Nation of Islam wanted to use the heavyweight champion’s celebrity to raise awareness of its cause, director Marcus A. Clarke uses never-before-seen footage that reveals the true strength of their bond in the months just before Malcolm’s death.

Make no mistake; these ten documentaries are a strong base from which to fashion an exciting Oscar race. But there’s always a surprise or two. Remember last year when we had our film pedigrees, subjects matters, and festival performances all lined up to make devastatingly accurate early predictions? And then a little octopus suddenly appeared from behind a rock and swam away with the Oscar? That’s what can make predicting this category so maddening – and so very much fun.

Are you ready for the Best Documentary Feature race to officially kick into high-gear? Which documentaries are you most looking forward to seeing? Are there any you’ve seen yet which you feel should be in consideration for awards recognition? Let us know in the comments section below or on our Twitter account.