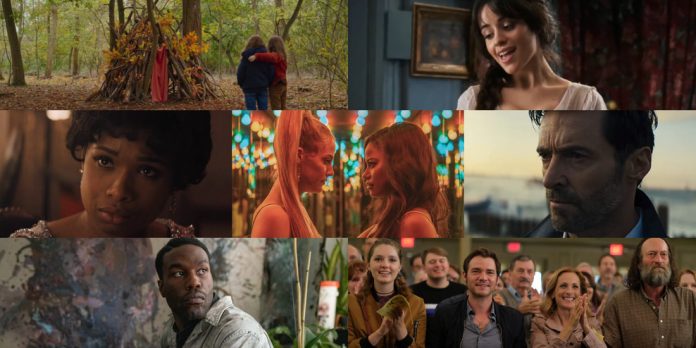 By Zoe Rose Bryant ​​​
​
At the 93rd Academy Awards, “Nomadland’s” Chloé Zhao made history when she won the Oscar for Best Director, as only the second woman – and the first woman of color – to achieve such a feat – eleven long years after Kathryn Bigelow trounced her competitors in the category for her work on 2009’s “The Hurt Locker.” While Zhao’s win is absolutely worth celebrating, new questions now arise; will we have to wait over a decade for another female recipient of the Best Director Oscar? Thankfully, even though this year’s race is chock-full of contenders from male auteurs (Paul Thomas Anderson’s “Soggy Bottom,” Wes Anderson’s “The French Dispatch,” Guillermo Del Toro’s “Nightmare Alley,” Steven Spielberg’s “West Side Story,” etc.), the ladies are ready to represent as well. Below, we outline ten female filmmakers who could follow in Chloé Zhao’s footsteps this awards season to earn a Best Director nomination – and maybe even secure that statue, too.

​Janicza Bravo – “Zola”
After premiering at the 2020 Sundance Film Festival a year and a half ago, Janicza Bravo’s “Zola” is set to finally hit the silver screen this July. Based on Aziah “Zola” King’s infamous 148-tweet Twitter thread about her crazy cross-country road trip with a fellow stripper, “Zola” is sure to be a raucous riot, mainly thanks to the anarchic antics of Taylour Paige (“Ma Rainey’s Black Bottom“) as the titular tweeter and Riley Keough (“The Lodge“) as her chaotic companion. However, early reviews also singled out Bravo’s singularly striking directorial sensibilities, with her ability to adapt this twisted tale receiving significant praise thus far. She’s already impressed when helming episodes of streaming hits like FX on Hulu’s “Mrs. America” and Amazon Prime’s “Them,” so this could be Bravo’s big-screen breakthrough.

Jane Campion – “The Power Of The Dog”
As one of only seven women to be nominated for Best Director, you simply can’t count out Oscar-winner Jane Campion (“The Piano”) this awards season, making her return to film (having been absent since 2009’s “Bright Star”) with Netflix’s “The Power Of The Dog,” an adaptation of Thomas Savage’s 1967 novel of the same name. Depicting a fierce feud in the 1920s between the sadistic Phil (Benedict Cumberbatch) and his brother’s feisty new wife, Rose (Kirsten Dunst), “The Power of the Dog” will undoubtedly be an incredibly intense affair – differing from Campion’s sweeping period dramas like “The Piano” and “Bright Star” – but with her incredible skill and formidable filmography, we have no reason to doubt the director at the moment. Throw in Netflix’s mighty awards campaigning muscle, and she’s looking like a sure-fire contender.

Kay Cannon – “Cinderella”
At first glance, one may wonder why we need another “Cinderella” adaptation, especially only six years after Disney’s own live-action reimagining was such a success with critics and crowds. However, before you count this contender out, consider all the changes Kay Cannon (“Blockers“) and her crew have made to the source material. Not only will the film feature the first Latina Cinderella (in the form of singer/songwriter Camila Cabello), but it’s also reenvisioned the role of the fairy godmother as a “genderless fairy godparent,” with “Pose’s” Billy Porter playing the part – which seems to indicate that this will be a much more modern take on the classic tale than we’ve seen in the past. The rest of the impressive ensemble cast (Idina Menzel as the Evil Stepmother, Minnie Driver as the Prince’s Mother, James Corden, and John Mulaney as two of Cinderella’s mice-turned-footmen) inspires confidence as well. While we have to wait to see if Cannon has the visual panache to make this musical “pop,” it’s certainly worth keeping an eye on.

Nia DaCosta – “Candyman”
Despite featuring Jordan Peele’s name heavily in the film’s marketing campaign – and some news outlets mistakenly attributing the movie to him as well – Nia DaCosta (“Little Woods“) is the director of this year’s long-awaited “Candyman” legacyquel. From what we’ve seen so far, she seems to have done a damn good job. Could she follow her producer’s path and have a horror hit on her hands that transcends the genre and becomes an awards season behemoth? It’s too soon to say – and the fact that “Candyman” comes from a pre-existing property as opposed to being a wholly original work may hurt it – but if the film is anything like that stunning shadow puppet short film released last June (in terms of both its visual artistry and its audacious handling of real-world woes), it’s sure got a shot. The fact that Marvel liked enough of what they saw to offer her the opportunity to direct 2022’s “Captain Marvel” sequel, “The Marvels,” could also be a sign this is something special.

Siân Heder – “CODA”
This year’s Sundance success story was Siân Heder’s “CODA,” a small-scale story about a young girl named Ruby (“Locke and Key’s” Emilia Jones), a “child of deaf adults” (CODA, for short), who struggles with how to decide what to do with her future – remain at home to help her family or pursue her personal passions as an aspiring musician. Crowds couldn’t get enough of the indie, voting for it for the festival’s Audience Award. At the same time, the Sundance Jury followed suit, as it swept the U.S. Dramatic category (winning the Grand Jury Prize, the Directing Jury Prize, and a Special Jury Prize for Best Ensemble) – the first film to do so in festival history. Later, Apple TV+, eager to enter the awards race, quickly acquired the movie for $25 million (which happened to be the biggest deal ever to take place at Sundance), is a sure sign of support for Heder and co. Will the Academy adore “CODA” – and Heder – as much as they did last Sundance’s U.S. Dramatic Grand Jury Prize winner “Minari” and its director, Lee Isaac Chung? The field is far more crowded this year, but there’s precedence for a real push.

Lisa Joy – “Reminiscence”
With “Reminiscence,” “Westworld” showrunner Lisa Joy is set to make her feature film directorial debut with a script of her own, centered around a man living in a near-future Miami (Hugh Jackman) who works in the perilous profession of offering his clients the chance to relive any memory they desire. When a passionate love affair with one of his customers (Rebecca Ferguson) goes south, he sets off on a search to find the truth about the woman who’s stolen his heart. Now, though some would say “Westworld’s” quality has dropped off since its stellar first season, one can never knock its captivating, high-concept thematics and its exceptional production values. With this logline alone, Joy certainly has us similarly intrigued in what she’s cooked up with “Reminiscence.” Sci-fi isn’t always the Academy’s cup of tea (“The Martian” and “Arrival” made it into Best Picture, while “Interstellar” and “Ex Machina” couldn’t escape the tech categories), but if “Reminiscence” ‘s story is as satisfying as its visual splendor, Joy might trounce her genre trappings

Céline Sciamma – “Petite Maman”
“Petite Maman” received rave reviews following its premiere at the Berlin International Film Festival. Céline Sciamma’s dreamy coming-of-age drama is set to come out here in North America through distributor NEON, who handled her former film, “Portrait Of A Lady On Fire.” That masterpiece mesmerized millions worldwide in 2019, but it still failed to find much success during that awards season. As a result, there now seems to be an added impetus to recognize Sciamma’s skillset, and this passionately praised fairy-tale-story-of-sorts about an 8-year-old girl befriending a younger version of her mother could do the trick. Most of “Petite Maman’s” – and Sciamma’s – chances rest on what NEON ultimately decides to do with its American release (and how its awards campaign is handled from here on out), but this is a contender that can’t be overlooked.

Liesl Tommy – “Respect”
Stage director Liesl Tommy is leaping to the silver screen in a big way this summer by directing Oscar-winner Jennifer Hudson in the Aretha Franklin biopic, “Respect.” Tommy is no stranger to making history – having become the first Black woman to earn a Tony Award nomination for Best Direction of a Play with 2015’s “Eclipsed” – so, could lightning strike twice, allowing Tommy to become the first Black woman nominated for Best Director as well? Currently, many are looking to “Respect” to be a pure Best Actress play for Hudson (a la music biopics of years past like “What’s Love Got To Do With It,” “La Vie En Rose” & “Judy“), and biopics, in general, aren’t as big a hit with the director’s branch as they were in the 2000s (“A Beautiful Mind,” “Ray,” “The Queen,” etc.). Still, if “Respect” makes a run for the Best Picture race, and if Tommy has some surprises in store for us, it’s easy to see a narrative coming together for her campaign.

Lana Wachowski – “The Matrix Resurrections”
Though she’ll be directing without her sister Lilly this time around, expectations are still sky-high for Lana Wachowski’s “The Matrix Resurrections,” the fervently anticipated fourth installment in the groundbreaking “Matrix” franchise, and it’s easy to see why. Even if we know next-to-nothing about the plot, for the time being, it’s simply reassuring to see Wachowski back in chief creative roles (directing, producing, and writing this sequel) right alongside her ensemble cast, which meshes series mainstays (Keanu Reeves, Carrie-Anne Moss, and Jada Pinkett Smith) with hot new stars (Yahya Abdul-Mateen II, Jessica Henwick, and Priyanka Chopra). As mentioned above, sci-fi can be a real hit-or-miss at the Oscars. Warner Bros. may choose to prioritize another epic genre blockbuster for awards season instead (Denis Villeneuve’s “Dune”), but “The Matrix Resurrections” has a prime end-of-year release date. If Wachowski comes up with new ways to remodel cinema just as she did 22 years ago, this could be the studio’s second sci-fi fourthquel to find Oscar success (see George Miller’s “Mad Max: Fury Road“).

Olivia Wilde – “Don’t Worry Darling”
After Olivia Wilde burst onto the scene as a director with style to spare and something to say with 2019’s “Booksmart” – which earned her a Film Independent Spirit Award for Best First Feature, among many other accolades – fans have been eagerly awaiting her follow-up feature. With the psychological/social thriller “Don’t Worry Darling,” it seems as if she’s prepared to deliver in spades. Re-teaming with “Booksmart” scribe Katie Silberman, “Don’t Worry Darling” follows an unhappy housewife in the 1950s (Florence Pugh) who discovers that everything is not as it seems, as her husband (Harry Styles) is hiding a dark secret from her. If that beguiling brief synopsis wasn’t enough to sell you on the story, its stacked cast (Chris Pine, Gemma Chan, Kiki Layne, etc.) certainly should. Wilde is exploring a new genre here – veering away from coming-of-age comedies and embracing eerie mysteries instead – but we’re confident in her versatility as a filmmaker. If all goes well, it could follow Emerald Fennell’s “Promising Young Woman” as the “feminist genre film” that breaks through.

So, what say you? Do you agree with our picks? Are there any other female filmmakers you think might surprise this awards season? Let us know your thoughts in the comments section below or on our Twitter account.