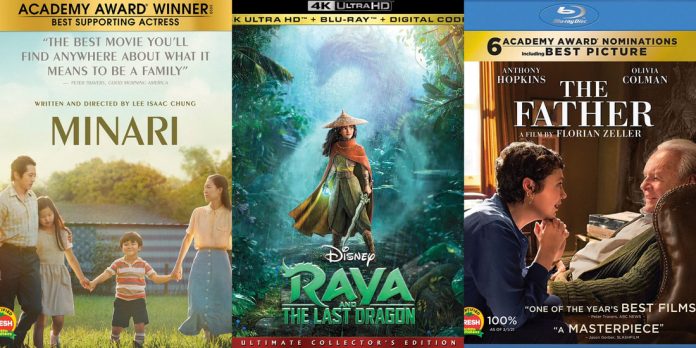 ​It is a truly stacked week in terms of new releases coming to Blu-ray, from Oscar winners to box office hits (as much as they could be in the pandemic) to indie favorites. Plus, there are several exciting 4K upgrades and astounding films from boutique Blu-ray labels.

​There are a couple of 70s classics receiving 4K upgrades this week. The first is the 1973 Best Picture Oscar Winner “The Sting,” directed by George Roy Hill and starring Paul Newman, Robert Redford, Robert Shaw, Charles Durning, Ray Walston, and Eileen Brennan. It includes both a 4K and a standard Blu-ray disc with the extras carrying over from the previous Blu-ray releases. There is also a Steelbook edition available.

The other big 4K upgrade is the 1978 comedy classic “Animal House,” directed by John Landis and starring John Belushi, Tim Matheson, John Vernon, Verna Bloom, John Hulce, and more. Like “The Sting,” this features the extras from the previous Blu-ray release, and a Steelbook edition is available.

​Severin Films is putting out a 4K release of Alejandro Jodorowsky’s 1989 film “Santa Sangre.” This release is a four-disc digipak set containing a 4K, two Blu-ray discs, and a CD of the film’s soundtrack. They are also releasing a two-disc standard Blu-ray edition. Both releases feature a new 4K restoration supervised by Jodorowsky. Included on the 4K release are over eight hours of new and archival special features, with many on the Blu-ray release as well.

The Criterion Collection is releasing the 1998 Taiwanese film “Flowers of Shanghai,” directed by Hou Hsiao-hsien and starring Tony Leung Chiu-wai and Michiko Hada. This is a new 4K digital restoration. It features a new introduction by critic Tony Rayns, a new documentary on the making of the film, and excerpts from a 2015 interview with Hou.

Finally, the most significant release from the Warner Archive Collection this week is the 1994 Jackie Chan film “Drunken Master II,” directed by Chia-Liang Liu. This features a new 4K restoration from the original camera negative and three audio options along with the original English subtitles.

This week, I’m recommending a film I love by a filmmaker I love that feels right for this Spring/almost-Summer season, and that is Sofia Coppola’s “The Virgin Suicides” from the Criterion Collection. Premiering at the 1999 Cannes Film Festival and released in the United States in 2000, this film stars Kirsten Dunst, James Woods, Kathleen Turner, and Josh Harnett, among many others. This was Sofia Coppola’s directorial debut, and it is a beautiful and ultimately haunting look at the trials and tribulations of being a teenage girl through the eyes of the young boys who adore them from afar, all set in the 1970s. I absolutely adore this film and would highly recommend it if you are a fan of Coppola’s later works (specifically “Marie Antoinette”) or just a fan of female coming-of-age films. Plus, it has a killer 70s soundtrack that helps convey its hyper-specific tone.

The Blu-ray from Criterion is, naturally, superb. It features a new 4K digital restoration supervised by cinematographer Ed Lachman and approved by Coppola. As far as supplemental features, it includes new interviews with the cast, crew, and famous writers, a making-of documentary on the film directed by Eleanor Coppola, Sofia’s 1998 short film “Lick the Star,” a music video for the film’s original soundtrack song directed by Sofia and her brother Roman Coppola, and an essay by novelist Megan Abbott. It’s a terrific release for a movie I love that I would highly recommend to just about anyone.

Are there any releases you will be picking up this week? Surely, with such a stacked week there must be, right? Let us know in the comments section below or on our Twitter account.