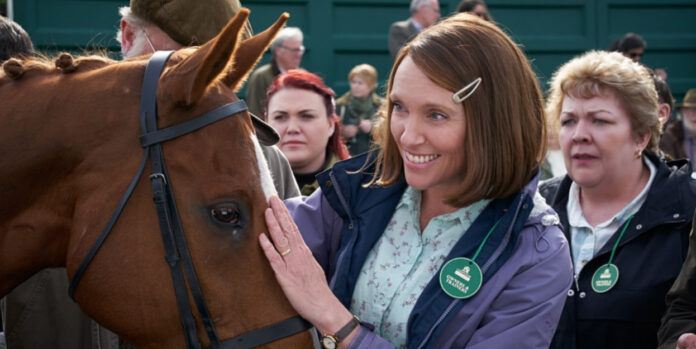 THE STORY – The true story of Dream Alliance, an unlikely racehorse bred by small-town bartender Jan Vokes. With very little money and no experience, Jan convinces her neighbors to chip in their meager earnings to help raise Dream and compete with the racing elites. Their investment pays off as Dream rises through the ranks and becomes a beacon of hope for their struggling community.

As someone who has spent quite a bit of time around horses, films about them can sometimes be rather funny as they seem always to stress how majestic the animals are. And horses certainly can be magnificent, but they also can spook at their own reflection. “Dream Horse” is a bit different from your ordinary horse movie in that it’s less focused on the horse itself and more concerned with the community supporting him. It’s based on the same true story as the 2015 documentary “Dark Horse,” about a horse in Wales called Dream Alliance.

The film, written by Neil McKay and directed by Euros Lyn, premiered at Sundance back in January of 2020. Jan Vokes (Toni Collette) is an empty-nester who works at the local grocery store and bar and cares for her aging parents. Her husband Brian (Owen Teale) barely listens to her, and she has little to get excited about in life. But she’s always loved animals and used to breed smaller ones, like rabbits, so when she overhears talk about racehorses, she decides she would like to breed one.

Jan spreads the word through her small Welsh town community and gives the locals a chance to put in money for a share in the mare and its eventual foal. The group then begins to make decisions together about the foal’s training, facing obstacles along the way because they’re not experienced, English, or wealthy. They do receive help from a local former racehorse syndicate leader, Howard (Damian Lewis), who must hide his involvement from his wife after promising not to get involved in horse racing again. It’s hard not to cheer on this ragtag group as they struggle through horse injuries and personal setbacks.

Colette is fantastic in her role as Jan. It’s a refreshingly natural everyman performance, compared to the more exaggerated roles we often see her in, and a good reminder that she can act subtly just as well as extravagantly.

Typically this genre is focused on the actual races themselves or one person’s relationship with the horse. But “Dream Horse” is more interested in the community that is built around the horse and how they support both Dream Alliance and each other. Obviously, the group wants their horse to do well in the races and to make a little bit of money, hopefully, but they’re much more concerned with making it to the races at all than with winning.

The film doesn’t feature any groundbreaking filmmaking, but it’s well made and feels very Welsh. It features some lovely emotional beats and is heartwarming without veering into being overly sappy. Whether you’re a horse person or not, “Dream Horse” is well worth a watch for its lovely leading performance from Collette and the positive feeling it is sure to leave you with.