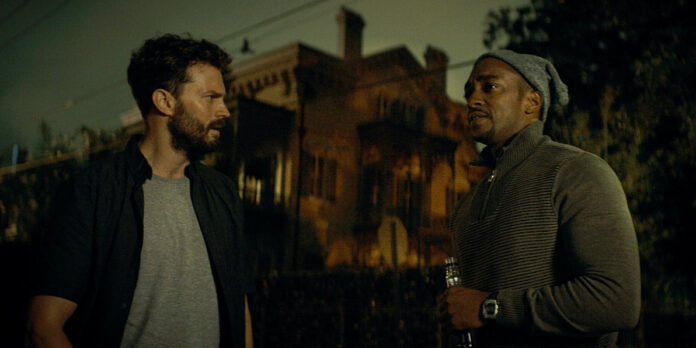 THE STORY – When New Orleans paramedics and longtime best friends Steve and Dennis are called to a series of bizarre and gruesome accidents, they chalk it up to a mysterious new drug found at the scene. But after Dennis’ oldest daughter disappears, Steve stumbles upon a terrifying truth about the supposed psychedelic that will challenge everything he knows about reality — and the flow of time itself.
​
THE CAST – Jamie Dornan & Anthony Mackie

As is often the case, the science-fiction genre allows for a wide landscape of stories that play heavily into allegory. It’s an opportunity to not only indulge in entertaining genre thrills, but also reveal a deep thematic commentary through a lens of metaphors. It’s in the latter arena where the spectacle of effects wizardry can be toned down for a more intimate character focus. In the best circumstances, it presents a unique opportunity to showcase a compelling drama set within an exceptional world. That’s the obvious goal “Synchronic” sets out to accomplish, though it doesn’t arrive there quite so neatly.

The setting of this film doesn’t immediately present itself too differently from our current one. The central characters are Steve (Anthony Mackie) and Dennis (Jamie Dornan), two paramedics in New Orleans who are privy to the daily horrors of attending to the sick, wounded, and dead. Their job is draining, but they tolerate the situation as Dennis deals with a flawed family life and Steve’s lonely bachelorhood and recent cancer diagnosis drive his isolation. Their recent routines have led them to a series of deaths that involved a new recreational drug called Synchronic. When Dennis’s daughter goes missing after it is believed she has taken the drug, Steve sets out to investigate the mysterious properties of Synchronic in the hopes he can find her and achieve the redemption he has been searching for.

Given the very limited means on which this film was made, what’s most impressive is how directors Justin Benson and Aaron Moorhead are able to successfully convey a detailed world that feels close enough to our reality while also inhabiting something particularly different. The textured cinematography works well to sell the authenticity of this grimy atmosphere, and it’s a further extraordinary achievement that the visual effects are well executed for such a small budget. The metaphors linking the issues of this world to modern drug epidemics may be obvious, but it’s crafted in a way that showcases a strong display of filmmaking.

Unfortunately, it’s Benson’s screenplay that leaves a lot to be desired. Despite having an intriguing premise, much of that potential feels wasted on shallow characters with basic motivations and a lack of momentum that carries one through the plot. The script has a set-up to contort timelines in a fascinating way, but it’s ill-defined in the beginning, and ultimately ends up feeling unsatisfying by the conclusion. Much of this story’s arc is the victim of stalled momentum, contributing to a lethargic pace that stunts a lot of the emotional connections made to these characters. Despite some proficiency in the crafting of the film, it’s the foundations of the story that ring hollow and ultimately lead one to become disengaged with the material.

The actors in this ensemble are capable of delivering fine performances, though no one is given the opportunity to do so with such empty characters. Mackie does manage to portray a sincere authenticity of a lonesome soul with a hardened façade masking deep vulnerabilities. He does his best with a character that isn’t given much nuance, and his portrayal is doing the heavy lifting here. The same goes for Dornan, who’s given even less to work with. Despite the potential for some intriguing characters on display, the material hampers the effectiveness of the performances, and the actors end up doing their best but can only be so accomplished given what they have to work with.

The ways in which a specific world can be crafted within the science-fiction genre is always an appreciated element, and there are moments in “Synchronic” that do showcase this accomplishment. The filmmaking is quite strong and is able to genuinely create a setting that feels tactile and engaging. It’s a true feat of directing that’s unfortunately severely undercut by a pedestrian story that indulges in basic characterizations, a languid pace, and a premise that suffers from poor execution. The effort to construct another inventive sci-fi concept is appreciated, but the final product is underwhelming.