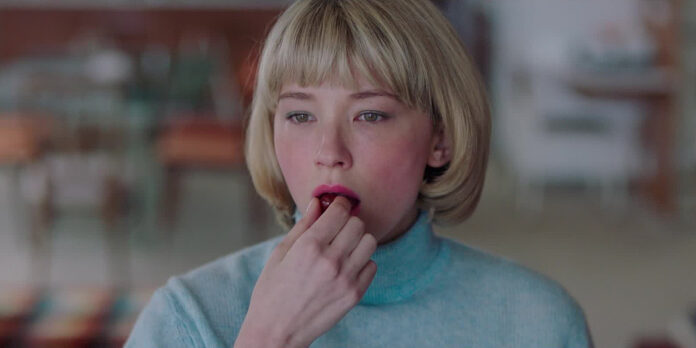 THE STORY – A young housewife in a seemingly perfect marriage develops pica, the irresistible urge to ingest inedible objects and material.

​​​​​​​​”Swallow” opens with a woman standing atop a balcony overlooking a river. She’s elegantly dressed and sporting a perfectly quaffed blonde bob. Hunter (Haley Bennett) is a newlywed and her and her husband, Richie (Austin Stowell), have just moved into their new home – a mansion purchased for them by Richie’s rich parents. These opening shots of our protagonist are juxtaposed with that of a lamb chosen for the slaughter. This literary device is a perfect introduction for Hunter as “lamb to the slaughter” is used to describe a person, like a young woman, who, for example, excitedly rushes into a marriage without realizing the sacrifices that lie ahead. The phrase is used generally to describe an innocent who is unaware of what dangers lie ahead. Both the former and the latter are the case in “Swallow.”

Writer and director Carlo Mirabella-Davis’s first feature is both a superb and distressing pastel-colored portrait of the crumbling psyche of a housewife. Living the wealthy American dream isn’t all sunshine and rainbows and Hunter’s existence proves as much. Her life is basically a stereotypical ‘50s advertisement that shows a housewife elegantly dressed for any occasion with thought bubbles above her head with only three words: gardening, cooking, and cleaning. Her every day is ruled by just these three things and her whole existence revolves around her husband. Hunter wanted to be an illustrator but was made to feel like she needed to give all that up because she’s now rich with a ring on her finger. She’s defined by Richie and has no voice of her own. His friends are her friends and his thoughts are her thoughts. It’s an image of a woman being controlled by what men like, and there’s a great fear that presents itself because of that: The fear of not pleasing her man. For Hunter, the pleasure of her husband comes first before her own. In one scene, Richie’s mother suggests that Hunter should grow her hair longer because her son prefers girls with long hair. The way she acts, the way she dresses, the film illustrates the horror of a woman no longer having control over her own body. It’s a perfect companion to “The Invisible Man” as they’re both stories of women trying to escape an incredibly controlling environment where men hold a feeling of ownership over their bodies and the resulting trauma that comes with that. Both “Swallow” and “The Invisible Man” are a fight for identity after it was taken away.

There’s one scene, perhaps at the end of the first half, where Hunter goes out to dinner with Richie and his parents to celebrate her newly announced pregnancy. She’s trying to tell a story but is quickly interrupted by Richie’s father who turns to talk to his son, both completely ignoring the fact that Hunter was even speaking at all. In that moment she becomes transfixed with the ice in her glass. She puts it in her mouth, and her chomping soon dulls out any surrounding voices. This impulsion to eat ice is an early sign of pica. Pica is a dangerous eating disorder where a person starts eating nonfood items. There’s no single cause for the disorder, but in some cases, according to Healthline, a deficiency in iron, zinc, or other nutrients may be associated with pica. For example, anemia, which is usually from iron deficiency, can cause pica in pregnant women which fits the character because Hunter herself is pregnant. However, the cause in this film is definitely more psychological. In an interview with Moveable Feast, Mirabella-Davis explains how his grandmother was an inspiration for the character. “[She] was a homemaker in the 1950s in an unhappy marriage,” the director says. “She developed various rituals of control – she was an obsessive [hand-washer] and would go through four cakes of soap a day and 12 bottles of rubbing alcohol a week, and I think she felt a need for order in the life she was powerless in.” His grandmother was put into a mental institution because of this and Mirabella-Davis comments that “she was being punished in a way for not living up to society’s expectations of what they felt a wife or mother should be.” Hunter’s pica – much more cinematic than hand washing – is definitely motivated by the same sense of feeling powerless. It’s a power mechanism in which she uses to reassert some kind of control over her body again, something that has been lost since her marriage.

While watching a woman swallow a tack and other sharp objects won’t provide the audience with any sensory pleasure, the film’s lush colors certainly will. Katelin Arizmendi’s cinematography is a feast for the eyes in its pastel glory. It’s almost fake that all these colors manage to co-exist, but the audience sees how that impression fits perfectly as the film goes on and the colors become more subdued – Hunter’s life wasn’t really a life at all. Haley Bennett may be soft-spoken in the role, but she delivers a fearless and tour de force performance as Hunter. Bennett is one of those actresses that I’ve watched many times in various other films but has never been given the material to really allow her to make an impression and to show off her range. She finally gets her due with “Swallow.” It’s a character and performance that’s incredibly uncomfortable to watch at times, but it’s like watching a sword swallower. You want to look away, but you can’t and you’re grateful you didn’t. ​