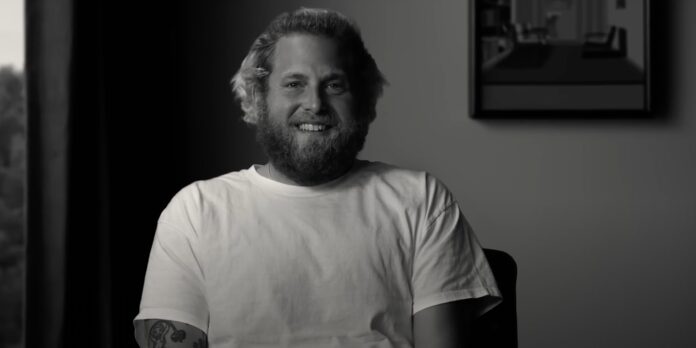 THE STORY – Follow Hill and his therapist as he has candid discussions of mental health and the progressively worsening anxiety attacks related to movie promotion that have turned his dream job into a nightmare.

Meta storytelling is having a moment in pop culture. From the hyper-palatable knowing humor of modern blockbusters to more complex offerings like HBO’s “The Rehearsal,” audiences seem to want to acknowledge the illusion of fictional storytelling. With “Stutz,” director Jonah Hill brings such knowing elements to the world of documentaries. His exploration of both the structure and dismantling of the filmmaking process parallels well with looking into the minds of himself and his therapist, the titular Phil Stutz. The film is ultra-personal, which may not appeal to all, but it features observations about the human brain that anyone could find fascinating.

Hill and Stutz discuss various topics through a series of filmed conversations that simulate therapy sessions. Family issues, personal image, the stress of aspiration, and a wide variety of other talking points are covered. Notably, Stutz shares his patently unique tools and methods with the camera in an effort to pass them on to a broad audience.

Hill makes the surprising but ultimately wise choice to basically tear apart the entire concept and very artifice of his film within its first few minutes. This allows him to move through his conversations in a much less structured way, leading to more natural revelations. This method of deconstructive filmmaking smartly reflects how therapy seeks to deconstruct the mind and its thinking patterns. When exploring a distinctive personality like Stutz, it makes sense to use an atypical format.

Stutz himself is a fascinating figure, and it’s easy to see why Hill would think filmgoers would be interested to learn not only about his therapeutic methods but also about the man himself. The therapist has a captivating life story, and he’s at his most invested when discussing how his personal experiences have shaped how he works with patients. Some of his ideas have a decidedly New Age energy to them, including some therapeutic concepts with names like “Lifeforce” and “Part X.” This line of thinking may alienate some audience members. Still, if someone weren’t on board with such expansive thinking, they likely wouldn’t watch a movie about therapy to begin with.

By its very nature, “Stutz” is incredibly didactic. Subjectivity is the name of the game in this documentary. While that’s impossible to avoid given its concept, it can occasionally make the film feel niche in how personal it clearly is to Hill. Sometimes, however, a story told with intense specificity can paradoxically make a movie feel more universally relatable. To audience members who can latch onto it this way, “Stutz” will undoubtedly be a learning experience that will last long after Netflix’s autoplay feature kicks in.