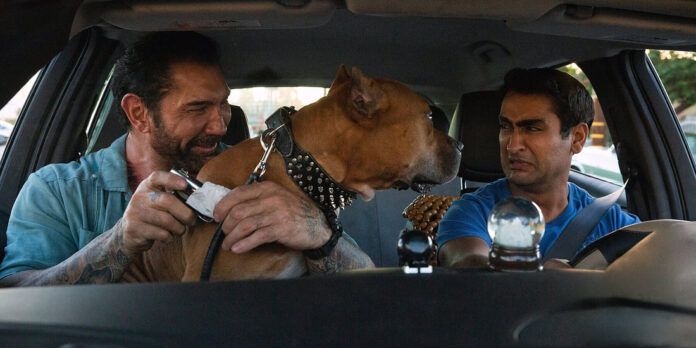 Summer comedies are notoriously unpredictable no matter the cast, director or writer. They are just as likely to be terrible as they are to be amusing. Surprisingly “Stuber” falls somewhere in between, with a good cast that is almost entirely wasted by a predictable script. There are fun action sequences that veer between looking great and then inexplicably terrible. “Stuber” tries to tell a story with a modern message but all too often falls back on the misogynistic tropes it is trying to point the finger at. For every good thing about it, there is something else that drags it down, resulting in a film that feels uneven and poorly thought out.

While the film is all about the relationship between Uber driver Stu (Kumail Nanjiani), and experienced cop Vic (Dave Bautista) it opens with the death of Vic’s previous partner played by Karen Gillan in a glorified cameo, at the hands the films drug magnate villain Oka Tedjo (Iko Uwais), setting the stage for the revenge chase that makes up the majority of the films run time. Several months later Vic is still mourning his partner and even more dedicated to bringing down the bad guy who killed her. When he is finally pushed into taking a day off, he gets Lasik surgery just before receiving a call from an informer that the big drug deal will be going down in an unspecified place that very evening. Barely able to see, Vic calls an Uber and ends up with Stu, who is desperate to up his Uber rating before he is kicked off the service. Vic forces Stu to drive him around to investigate but before long Stu receives a call from a close friend he has a crush on, begging him to come and hang out with her after breaking up with her boyfriend.

Vic is a stereotypical ‘man’s man’, while Stu is a nervous and retiring nerd who is more likely to run away than stand and fight. As their day continues and Stu tries desperately to get away from the violence that unfolds around him while Vic is investigating the film uses this all too familiar relationship dynamic to entertain its audience, relying on the novelty of unexpected changes to familiar scenarios to keep the laughs rolling. It takes far too long for Vic and Stu to find their equilibrium and the jokes quickly become stale and even though the film is a trim 93 minutes it feels far longer than that. The third act allows Kumail Nanjiani to unleash his comedic prowess and is much better than the first two acts, but it feels too little, too late by the end.

Due to the obvious way the story plays out, the film rests on the actors’ shoulders to keep audiences entertained, Dave Bautista gives a decent performance as “Tough Old Cop” but it is Kumail Nanjiani that steals the entire show. Once Nanjiani is free of the stereotype that he has been laboring under the rest of the movie, he brings a breath of fresh air to the film with his pointed commentary and acerbic wit. Iko Uwais and his magnificent fighting skills are fun to watch, even with his limited screen time. The women of the film work hard with the little they are given to work with, particularly Natalie Morales as Vic’s daughter Nicole.

“Stuber” does its level best to appeal to everyone and it is one of those rare films that mostly succeeds. If this film is about anything it is about masculinity and regardless of your feelings on that topic there is something to appeal to you in this film and it is happy to take all comers, which is one of its downfalls. By being unwilling to take a stance-regardless of what that stance is-it feels watered down and while most will find something to enjoy, they will also find something to revile leaving everyone unsatisfied. Despite all of that, Kumail Nanjiani is well worth watching in pretty much anything he is in and this film is no different. He and Dave Bautista make a great team and the impressive supporting cast provides a good show as well. While I have my problems with the film, I still enjoyed watching it and if you can read this review and are still interested, you probably will too.