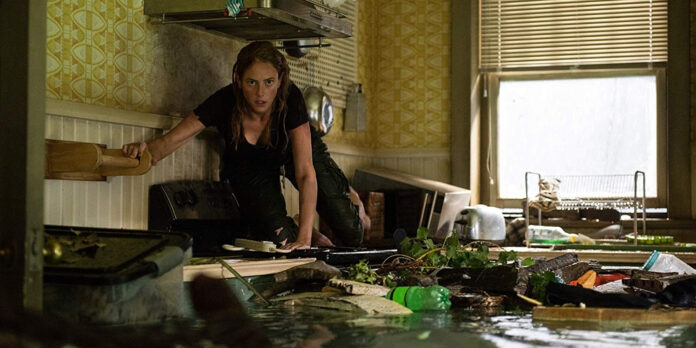 THE STORY – When a massive hurricane hits her Florida town, young Haley ignores the evacuation orders to search for her missing father, Dave. After finding him gravely injured in their family home, the two of them become trapped by the rapidly encroaching floodwaters. With the storm strengthening, Haley and Dave discover an even greater threat than the rising water level — a relentless attack from a pack of gigantic alligators.

Sometimes, we just want to go to the cinema and forget about the big-budget blockbusters or the prestige award-winning independents and watch something with little expectations and have fun while doing so. “Crawl,” is your typical B-level monster movie, packed with genre thrills, high stakes, and simplistic yet passionate storytelling. It’s not fast food but it is also not a high reviewed cuisine dinner as well. It’s a combination of both that is typically reserved for straight to VOD release but we’re fortunate enough to get to watch this one in the theater with a group of people, as we scream, jump, gasp and cheer our way through what is ultimately, a delightful cinematic experience.

“Crawl” follows a Haley Keller (Kaya Scodelario), a professional swimmer, who during a category 5 hurricane in Florida, drives to her father’s house  (Barry Pepper) to check on him, as he hasn’t been answering his phone while everyone else gets evacuated from the area. She finds him underneath the house in the crawl space where he has been unconscious and attacked by an alligator. With the waters rising and more alligators closing in, Haley, her father, and their dog must fight the odds and find a way out for survival.

Yes, “Crawl,” can be a bit over the top at times. I mean, how hungry are these alligators really? What do they have against Haley and her father And as per the usual with these kinds of films, the dialogue leaves a lot to be desired. However, director Alexandre Aja (“Piranha 3d” & “The Hills Have Eyes”) shows a confident amount of skill behind the camera, working with water, utilizing sound effectively and ratcheting up the tension and suspense, pushing these characters to the very brink, all the while keeping the narrative and the runtime tight and self-contained. Even if you get nothing from “Crawl,” other than the genre thrills and pleasures of watching alligators take large bites into human flesh, you have to admire that the film doesn’t waste your time, telling the story it needs to tell in less than 90 minutes. For another example of this, see the 2016 thriller “The Shallows,” which also involved a giant sea creature preying upon a human swimmer within an enclosed space.

I genuinely love how Kaya Scodelario’s character Haley is a trained swimmer and how that is weaved into the narrative. I really love her endurance, strength, and ability to keep calm under pressure, all the while still displaying a vulnerability that makes her relatable. I also genuinely love the simple but emotional story arc between her and her father. By the time we get to the third act, I was clapping and cheering them on to survive this terribly unique and unfortunate set of circumstances they found themselves in and I suspect, you will too. It may not resonate with you afterward or give you a ton to think about as you leave the theatre but what “Crawl” sets out to do, it achieves and who could ask for anything more than that?