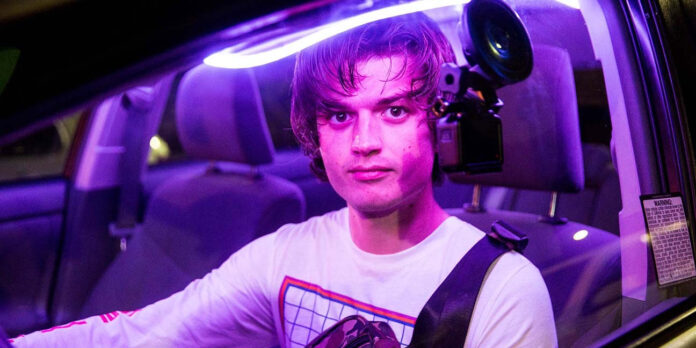 ​One of this year’s blackest comedies debuted earlier at the 2020 Sundance Film Festival: Eugene Kotlyarenko’s “Spree.” A combination of “Nightcrawler,” “Searching” and “Joker” all rolled up into one, the film polarized audiences who either found it to be a twisted piece of social commentary or an empty satire with nothing new or original to say. I lean somewhere in the middle, mostly thanks to a bonkers and unpredictably entertaining performance from Joe Keery (“Stranger Things“).

Kurt Kunkle (Joe Keery) is a rideshare driver for Spree (think Lyft or Uber) who wants nothing more than to go viral and become famous in a world that is completely obsessed with online culture. After careful planning, Kurt decides to one day enact his great scheme which will surely launch him to the top. He calls it #TheLesson. With a fully camera-equipped car, Kurt drives around town, picking up unsuspecting victims and live streams his rides and eventual murders of these individuals. As the day progresses and Kurt’s social media experiment grows in followers, lines are crossed, the difference between what is real and what is fake is blurred and the killing spree becomes more dangerous.

I’ll be first to admit that conceptually, I love the design and presentation of “Spree.” Shown only through cameras either located inside of Joe’s car or through cellphones and other electronic devices, Eugene Kotlyarenko’s vision reminded me very much of “Searching,” which also told its story exclusively through screens. The dark tone mixed with black comedy, all centered around a central performance of a psychopath who is driven by a warped view of success harkens back to “Nightcrawler.” However, the film’s condemnation of social media, influencers, and online worship all reminded me very much of “Joker” and how, despite the film’s best intentions, there will still be those who confuse the film’s message and label Kurt Kunckle as some kind of idol. Make no mistake, this is a very demented and delusional individual who should not be placed on a pedestal, no matter how good Joe Keery’s performance is. And he is very good. Welcoming, warm, and energetic, with a bright smile that can disarm anyone, before he commits horrible acts of violence, all for the sole purpose of hoping to go viral.

Is this where we are heading? What lengths will we go to in order to achieve fame and celebrity status? How much are we culpable in our enablement of such bloodthirsty lust? While other films have tackled these questions before, “Spree” is still worth checking out mostly for Joe Keery’s performance. Some will definitely take issue with Kotlyarenko’s tone, thesis statement, and lack of nuance in his depiction of violence and bleak viewpoint of online celebrity culture. However, “Spree” will also hopefully inspire some meaningful conversation about its themes, even if those discussions feel dated and overdone.