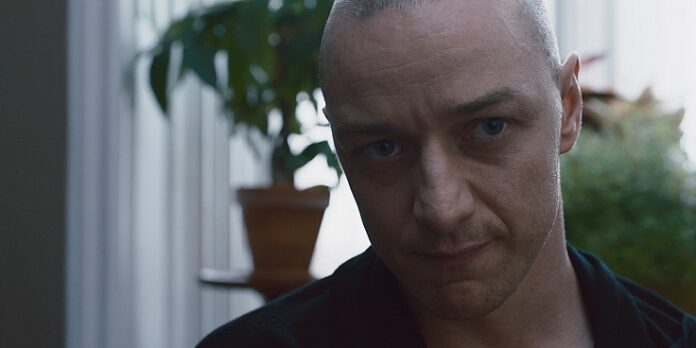 THE STORY – Though Kevin (James McAvoy) has evidenced 23 personalities to his trusted psychiatrist, Dr. Fletcher (Betty Buckley), there remains one still submerged who is set to materialize and dominate all of the others. Compelled to abduct three teenage girls led by the willful, observant Casey, Kevin reaches a war for survival among all of those contained within him — as well as everyone around him — as the walls between his compartments shatter.

​”Split” represents M. Night Shyamalan’s comeback film. After many missteps within his career which sank him lower and lower into critics and audience’s good graces (See “Lady In The Water,” “The Happening,” “Avatar: The Last Airbender” & “After Earth”) he now comes roaring back with “Split.” It’s a solidly crafted film that returns M. Night Shyamalan back to form with genuine suspense, terror, and dread. However, the most surprising aspect of all is that this film’s twist does not derail the movie. It actually enhances it!

Claire (Haley Lu Richardson) has finished celebrating her birthday with her classmates Marcia (Jessica Sula) and Casey Cooke (Anya Taylor-Joy). While waiting in her father’s car with her friends, a mysterious man named Kevin (James McAvoy) makes his way into the car and abducts the three girls. They wake up in Kevin’s underground cellar and realize that not only is Kevin violent but he is mentally unstable with 22 different personalities living within his body. Each personality has their own physical attributes, thoughts, and desires. Kevin regularly visits a psychologist, Dr. Karen Fletcher (Betty Buckley) who is desperately trying to get down to the bottom of Kevin’s condition before he does something terrible. Which will be soon as the three girls realize they have to escape, for they are being prepared by Kevin to be sacrificed for an unknown 24th personality known as “The Beast.”

The number one big thing that people will be talking about when they come out of “Split” (Other than the shocking twist) is James McAvoy and his tour de force performance as Kevin Wendell Crumb. McAvoy crafts different personalities of Kevin with such meticulousness in terms of his physicality and facial expressions that we believe every one of his incarnations with fear and even sympathy in some places. His performance (Along with many other aspects of this film) will certainly draw comparisons to last year’s “10 Cloverfield Lane” in how unpredictable and fascinating he is. Anya Taylor-Joy makes yet another appearance in a horror/suspense film, this time playing the victim (And boy oh boy does M. Night Shyamalan really hit this one on the nose) and anchors the movie as the wisest of the three abducted girls. Her character of Casey is a bit of a loner and embodies the film’s themes of how past trauma can grant you strength. The other two girls, Haley Lu Richardson & Jessica Sulla, do not get as many opportunities as Taylor-Joy to show off their talent both as characters and as actors. This is Anya Taylor-Joy’s story and Shyamalan reveals more about why her character is the way that she is through not so subtle flashbacks that are genuinely unnerving. The other standout in the film is Betty Buckley who provides us insight into Kevin’s character through the many therapy sessions the two share together.

Audiences are more likely than not going to have divisive reactions to “Split.” The film is not necessarily scary enough to illicit jump scares or outright horror. It’s also a little too campy at times (See any scene regarding “Hedwig,” one of Kevin’s many personalities) and it takes itself a little too seriously at times as well (See Casey’s flashbacks). Anyone who has been impacted by mental illness is surely going to take offense to this film as well in how it handles the issue. So who exactly is this film for? Without giving too much away, it’s for fans of M. Night Shyamalan. There may not be many of them left after his mid-career slump. But for those that remain and look back fondly on his first couple of films, will no doubt leave the theater satisfied. Everyone else will most likely be confused as to why their friends are freaking out but that’s what makes “Split” so special. I cannot honestly remember the last time I was trending towards hating a movie and then all the wrongs (Well, not all of them) were mostly corrected with its final 20 seconds. Suffice to say, do your absolute best to see “Split” as cold and spoiler free as possible. What Shyamalan does here is brilliant and bold. It may not pay off for everyone, but it’s certainly daring and that is a good sign for the writer/director who we all had written off as a has-been.

“Split” is held together by its main performances from James McAvoyand Anya Taylor-Joy and seeing director M. Night Shyamalan craft a slow burn suspense film with skill. It does not bring anything new to the table and will certainly not go down as M. Night Shyamalan’s best film, nor one of the best of the year. Despite most of the issues with the film, it’s still surprisingly a good bit of fun at many points, especially when it comes to watching McAvoy’s magnetic presence on screen. Shyamalan still has a long ways to go in terms of his writing (Tonally, this film is all over the place) but those who are fans of his earlier work will certainly leave the theater ecstatic at what the inconsistent writer/director has next up his sleeve.