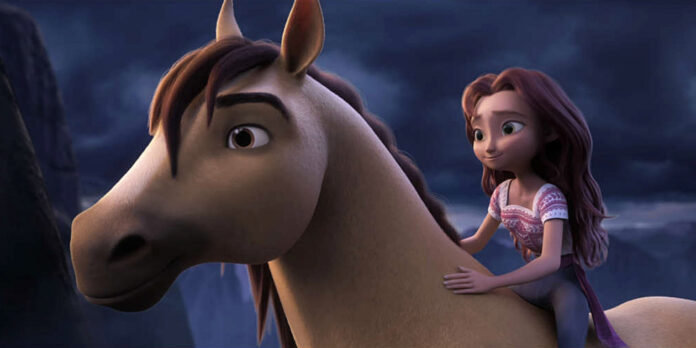 THE STORY – After moving to a sleepy little town, young Lucky Prescott befriends a wild mustang named Spirit, who shares her rebellious spirit. When a heartless wrangler plans to capture Spirit and his herd, Lucky and her new friends embark on the adventure of a lifetime to rescue the horse that forever changed her life.

​Though nominated for an Academy Award for Best Animated Feature, Dreamworks Animation’s “Spirit: Stallion of the Cimarron” hasn’t exactly made a lasting cultural impact. Released one year after “Shrek,” it’s understandable that “Spirit” had a lot to live up to. Despite this lack of a notable lasting fanbase, “Spirit” still led to a Netflix animated series, “Spirit Riding Free,” released in 2017. While the series successfully led to this new feature film, “Spirit Untamed” doesn’t have the elevated quality expected from a theatrical release.

While Matt Damon voiced the interior thoughts of the titular stallion in the original film, the horses don’t have voices in “Spirit Untamed.” Instead, this film follows Fortuna “Lucky” Prescott (voiced by Isabela Merced), a young girl who recently moved to the town of Miradero. While her mother died when she was a baby, Lucky never knew it was in a horse-riding accident. She was raised by her Aunt Cora (Julianne Moore) but goes to live with her father, Jim (Jake Gyllenhaal), for the summer. Here she discovers a seemingly unbreakable stallion named Spirit, sans Damon voiceover, and forms a connection with him.

As a dad of toddlers, the low-budget look of CGI animating any Netflix series is immediately recognizable. It’s a notable step down from most mainstream theatrical studio animated films. Unfortunately, though released by Dreamworks Animation and Universal Pictures, “Spirit Untamed” maintains the low-quality animation of the series. It’s a stark contrast to the stunning hand-drawn animation of the original film. While younger viewers surely won’t mind, this look is immediately off-putting to parents who might watch with their kids.

Uninspired animation notwithstanding, the story itself is sweet and inoffensive, if unoriginal. Lucky is somewhat of a misfit, but as she grows her connection with Spirit, she also begins to find friends in her new town, Pru (Marsai Martin) and Abigail (McKenna Grace). When evil horse wranglers capture all the other horses, the three girls go on a dangerous mission through the desert to rescue them. Along the way, as one would expect, Lucky grows more confident in herself and begins to learn more about her late mother while also developing a stronger bond with her dad.

With a weak story, the film overcompensates with unfunny physical jokes throughout. For instance, while talking with her hands and telling her dad a story over dinner, Lucky accidentally throws mashed potatoes all over Cora’s face. The jokes are out of nowhere and never really land, only serving the purpose of breaking up more boring stretches of the film. Similarly, several bland songs cover various montages, which still make the film feel cheap. That said, there’s a nice Fleet Foxes needle drop near the end of the film that I quite appreciated.

Despite being a straight-to-DVD film given a theatrical release, the cast list is surprisingly strong. I didn’t even realize Julianne Moore played aunt Cora until I read her name in the credits. Even more fascinating (and hard to believe) is that “Spirit Untamed” is Jake Gyllenhaal’s first-ever voice acting role. He’s done a bit of narration but never voicing a character in animation before this. The young actresses, Merced, Martin, and Grace, all do a fine job with their characters as well.

“Spirit Untamed” is a forgettable entry in the Dreamworks Animation canon – notable only for its connection to the original film. While I can’t vouch for the quality of the Netflix series, this film doesn’t feel like it has a place on the big screen. Little kids may enjoy it well enough, though it’s hard to imagine this as a strong competitor for their attention or repeat viewings.