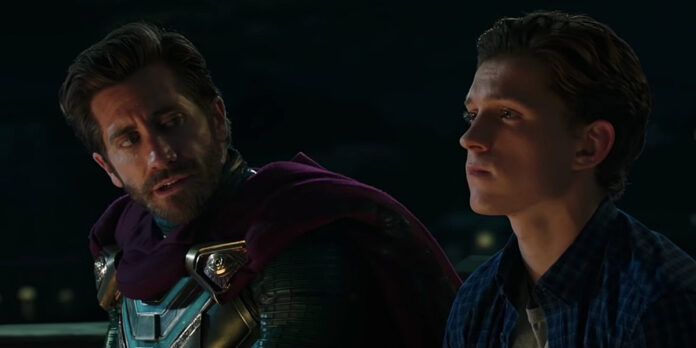 THE STORY – Following the events of Avengers: Endgame, Spider-Man must step up to take on new threats in a world that has changed forever.

​​Coming off the back of Marvel’s biggest film yet (“Avengers: Endgame“), it’s time to re-visit our friendly neighborhood Spider-Man. But this time, he’s not just taking care of the neighborhood, he’s going international. Marvel’s latest is all about taking things to the next level for the fan-favorite character. “Spider-Man: Far From Home” pushes the character of Spider-Man forward in ways that he has never been pushed before. It pushes Peter Parker forward. The action, the humor, the twists, all of it gets pushed forward by director Jon Watts, returning after helming the web slinger’s successful 2017 standalone film “Spider-Man: Homecoming.” There are times where this lofty sequel (the most ambitious from a storytelling level within the MCU since “Iron Man 3”) threatens to collapse under its own weight. However, this delightful cast and the ever watchful eye from Watts never lose sight of this hero’s most endearing asset: his relatability.

It’s been 8 months since the death of Tony Stark and Peter Parker is at a crossroads in his life. On one hand, he has Tony’s legacy to think about and whether or not, he should step up and become the Avenger that Tony always knew Peter could be. Or, he can forget all of that and enjoy his summer vacation school trip through Europe with his friends Ned (Jacob Batalon), Flash (Tony Revolori), and the girl he has a crush on, Michelle Jones, otherwise known as MJ (Zendaya). Peter wants to tell MJ how he feels about her and live out his quiet life as an awkward, smart but lovable teenager. However, everything for Peter becomes complicated when Nick Fury (Samuel L. Jackson) shows up in Europe with a new hero named Quentin Beck aka. Mysterio (Jake Gyllenhaal), to fight the Elementals. Balancing his two lives was tough before but now Peter must make a choice or otherwise risk sacrifice to keep pursuing a life as both Peter Parker and as Spider-Man.

In a post-Tony Stark world we, like many characters in the movie, are wondering “what’s next?” We hear over a high school produced news production one character say that it’s “time to move on to a new phase.” And that’s where we are. We are living in a new era and it’s up to young heroes such as Spider-Man, to move on from the small scale neighborhood crime, join Shield and pick up the mantle to become the Avenger that Tony Stark always knew he could be.

That larger scale conflict that drives and pushes Spider-Man is matched by the smaller scale conflict that drives and pushes him as Peter Parker. As a young teenage boy on a high school trip through Europe, all he wants to do is enjoy his summer vacation with his friends and tell the girl he cares about that he likes her. Isn’t that just sweet? It’s all very earnest because Tom Holland does a wonderful job of selling both conflicts and making them feel equally as personal and powerful. It’s because of his excellent performance (one which I think is the best interpretation of the character yet) that both conflicts convey this film’s themes of responsibility (explored greatly in the Sam Rami films but done with a new twist here), choice, maturity and even deception. The last one is most interesting as both Spider-Man and Peter Parker are lying to themselves at multiple times throughout the story as the stakes continue to rise and the balancing act between Peter’s dual lives become increasingly harder to manage.

But the biggest astonishment in all of “Spider-Man: Far From Home” is the character of Mysterio, played by Academy Award nominee Jake Gyllenhaal. While he won’t be nominated for any awards for this performance, only an actor of the caliber of Gyllenhaal could’ve pulled off such a multifaceted character. I said before that this film takes risks and what it does with Mysterio may be shocking at first (there are times where the film’s tone can be a bit too snappy and erratic, evoking memories of “Iron Man 3”) but it’s always in service to Peter Parker/Spider-Man’s story, as the world needs a new hero to emerge without Tony Stark around anymore. Mysterio also conducts a stunning sequence towards the end of the film’s second act which is visually inventive, breathtaking and highly absorbing. It’s probably the most creative visual effects work from the MCU since “Doctor Strange” and it is so exciting to watch as Marvel reminds us after what has been a disappointing summer blockbuster season that these films still have the ability to not only entertain but surprise you as well.

There’s so much more praise I can throw towards “Far From Home.” From its sound design to its score, the awkwardly perfect chemistry between Tom Holland and Zendaya, the constant light humor and its well-utilized cast, all of whom receive a moment to showcase their worth, “Spider-Man: Far From Home” truly sets out to do a lot. It can be a bit overwhelming at times and I cannot sit here and say it is completely flawless. However, Watts knew what to focus on to make this web-slinging adventure stick and if that wasn’t enough, the post-credits sequence will surely have you leaving the theater shrieking with joy and shock simultaneously. Yes, it’s that amazing. And yes, even though “Endgame” was probably the best place to end Phase Three of the Marvel Cinematic Universe, “Far From Home” does the legacy of Tony Stark/Iron Man proud. It boldly ushers in a new phase of storytelling possibilities for Peter Parker/Spider-Man, proving that producer Kevin Feige still has some tricks up his sleeve and I personally cannot wait to see how our neighborhood friendly Spider-Man chooses to face them.