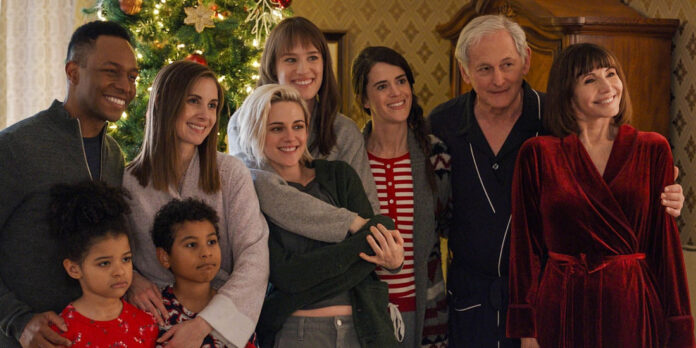 THE STORY – A young woman with a plan to propose to her girlfriend while at her family’s annual holiday party discovers her partner hasn’t yet come out to her conservative parents.

​​While the Hallmark Channel and Netflix turn out a wildly high number of Christmas films every year, it’s rare to see a new holiday film that feels like it could become a classic that people return to year after year. But Clea DuVall’s “Happiest Season” might just be that rare movie. With a bleach-blond Kristen Stewart and Christmas music galore, it sets itself apart from other Christmas movies by featuring a romance between two women at the center of its plot. Written by DuVall and Mary Holland, its clever script is genuinely funny without trying too hard, though it holds all of the second-hand embarrassment that you could hope for in a rom-com of this type.

Harper (Mackenzie Davis) loves Christmas, but her girlfriend Abby (Stewart) prefers pet-sitting for other people celebrating the holiday since the deaths of her parents ten years earlier. When Harper invites Abby to come home with her for the holidays, she agrees and is even excited about it before finding out that Harper isn’t out to her family and that the two will have to pose as roommates and hide their relationship. In addition, Harper’s dad Ted (Victor Garber) is running for mayor, and the family is focused on making themselves look good in front of the donor that he is trying to woo. Having to hide their relationship is sort of the opposite of the popular fake-dating rom-com trope and creates the perfect tension for a holiday film.

It turns out that Harper’s family is more than a little eccentric. Her mother Tipper (Mary Steenburgen) is obsessed with getting content for her new Instagram account to help her husband’s political campaign and is continually snapping photos on her iPad. Middle sister Jane, played by the film’s writer Holland, is continually fixing things and desperate to be involved. Eldest sister Sloane (Alison Brie) has a seemingly perfect husband and (terrifying) young twins, but she still has an intense sibling rivalry with Harper, trying to win their dad’s approval. It might seem a little over the top in a normal film, but these quirks fit quite well in a Christmas movie.

While it’s largely Stewart’s movie and she does a fantastic job, Dan Levy and Aubrey Plaza are also standouts in the cast. Levy plays Abby’s best friend, John, who is filling in to pet-sit for her — and is not doing a great job. The phone calls between him and Abby are some of the best parts of the film. The character sometimes veers towards a stereotype of a gay best friend, but Levy’s performance saves it. Plaza plays Harper’s secret high school ex-girlfriend and is a very grounding breath of fresh air amongst the chaos.

It’s true that we need to see more major Hollywood films that feature lesbian characters that aren’t tragic and don’t revolve around coming out. But the themes of this film do work particularly well for the holiday movie format and it’s great to see a film about a gay couple that has a happy ending. Both Stewart and Davis get the chance to give great performances and Levy’s big speech is incredibly touching. The film is careful to show that coming out is deeply personal and a choice that everyone should get to make for themselves.

“Happiest Season” is very dramatic and over-the-top in the style of most Christmas films. But at its heart, it addresses real issues and family relationships in a meaningful way. If it has a flaw in its storytelling, it’s perhaps that it doesn’t do enough to make the audience like Harper while Abby seems fairly perfect. (I yelled at my screen more than once that Abby needed to save herself and get out of there.) Yet, this unique film is a fantastic addition to the Christmas movie catalog and one that I hope will inspire others like it.