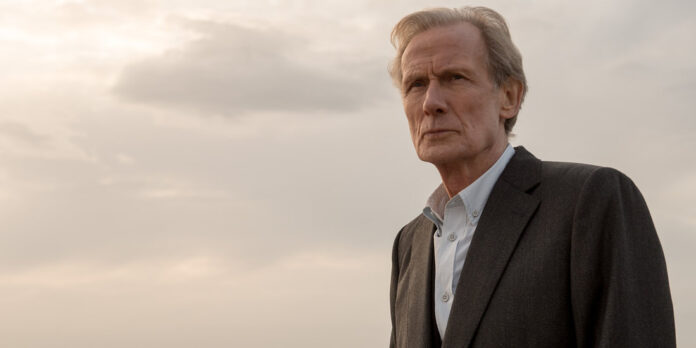 THE STORY – Alan has been searching for his missing son for years after he stormed out over a contentious game of Scrabble. When a body is discovered that may be his son’s, he must repair the relationship with his remaining son to heal as a family.​

​​Simple, unforced charm isn’t always an easy thing for a film to accomplish. It takes a lot of effort to appear effortless. Carl Hunter’s feature debut, “Sometimes Always Never,” is a perfectly pleasant movie about grief, family, and how we value the things that are most important to us. It doesn’t take any huge swings or break any molds, but that just further contributes to its feeling of comfort and coziness. It’s essentially the film equivalent of a favorite old sweater.

Alan (Bill Nighy) is a meticulous and somewhat idiosyncratic tailor with a love for the game Scrabble. He has spent the last couple of years searching in vain for his missing son Michael, often with the reluctant assistance of his other son, Peter (Sam Riley). With a potential end of the search in sight, Alan takes it upon himself to repair the bond between, not only himself and Peter, but also between Peter, Michael, and his wife.

When the film begins, it immediately sets up an undeniably quirky tone. Its costumes and sets are colorful, it occasionally uses black-and-white silent flashbacks, and it makes frequent use of centered overhead shots of inanimate objects. It’s almost impossible to not compare the direction to that of a similarly flashy director like Wes Anderson. These choices reflect the interior life of Alan, who lives his life by specific sets of rules and has a particular affection for keeping things tidy and in their proper place. However, this tone doesn’t continue throughout the entire movie, and in the last act of the film, it’s almost entirely abandoned for a much more understated directorial style. And it’s not as if this imbalance is because the film gets more grounded or “real” as it goes on. After all, it opens with Alan and Peter going to identify a body that could potentially be Michael. This may be because the narrative eventually shifts to focus on Peter, who’s much more pragmatic than his father, but the visual style and the tone don’t make a big enough change to make it clear that this is the intention. The initial directorial choices are admirable in creating a specific tone and providing the film with a clear voice, it’s just unfortunate that this isn’t kept up across the course of the entire film.

Part of its charm is thanks to the talents of the cast. Bill Nighy plays a type of character he’s always good at inhabiting: an older, soft-spoken man with an undeniable, if not always obvious, warmth. He’s a reliable anchor who keeps the film steady. The standout of the cast is the often under-appreciated Jenny Agutter as Margaret – a mother who, just like Alan, is searching for her missing son. Agutter is both hilarious and heartbreaking, encompassing so many different facets of grief in her all-too-brief screen time.

The film’s exploration of the varying ways people deal with grief is its strongest point. Nearly every person in Alan’s family is grieving the loss of Michael, even if they don’t recognize it. The film shows the varying effects of grief on different people – some deny it, some wallow in it, and some simply shut down. Alan’s love of Scrabble also serves to show the weight of words in dire situations like this. The characters constantly discuss the point value of different words in the board game, but they may as well be discussing the actual value of words in real life.

“Sometimes Always Never” is a pleasant, uneven little film. Its themes are resonant for almost everyone and its tone is light enough that it’s never weighed down by its subject matter. It’s sometimes inconsistent, always charming, and never too heavy.