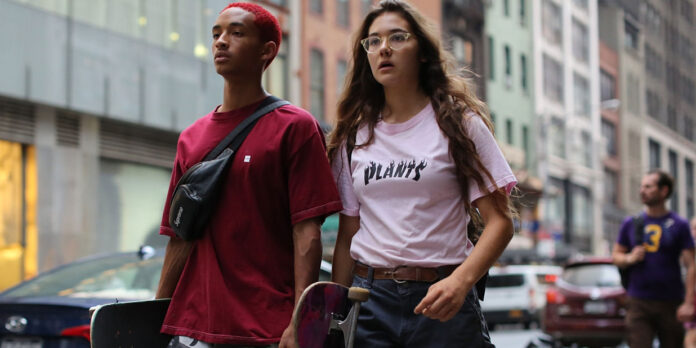 THE STORY – Camille’s life as a lonely suburban teenager changes dramatically when she befriends a group of girl skateboarders. As she journeys deeper into this raw New York City subculture, she begins to understand the true meaning of friendship.

​​In a collision, one moving force strikes against another. The result of these collisions differ; sometimes both forces break, sometimes only one. Regardless of who breaks, one thing remains – after a collision, neither force stays the same. In director Crystal Moselle’s “Skate Kitchen,” collisions happen frequently, and violently. Skateboards colliding with cement, fists colliding with faces, and a worried mom colliding with a wayward teenage daughter. It’s an eclectic coming of age story that relies less on narrative crutches and more on visual depictions of emotions, both good and bad.

Camille (Rachelle Vinberg) is an eighteen-year-old skater girl living in New York City with her mom, with whom she moved in five years prior (Before that, she’d been living with her father). Camille is quiet, at times disconnected from the real world, and subconsciously craving to be included in the world. Her version of inclusion happens in the form of an Instagram page called “Skate Kitchen.” The Instagram showcases female skaters, which is a rarity in a sport where women are in the minority. After meeting up with the female crew and gaining their respect as a skater, Camille finds her tribe in these women. The conflict in the first half of “Skate Kitchen” comes down to the tension that grows between Camille and her mom, which increases in severity the more Camille finds her place in the skate community. Unfortunately, Camille’s mom does not approve of her skating, pushing Camille to hide her newfound life and friends. In the second half of the film, we see Camille’s conflicts unravel following the introduction of her coworker and fellow skater, Darren (Jaden Smith). As she pulls away from her family life, she’s pulled into the skater subculture, where sexuality is mainly fluid and everyone knows everyone. She eventually learns the latter part the hard way and is forced to reconcile her life as a skater with the deceptions, however slight, that have caused collisions both between her and her mom, as well as between her new female friendships.

From the first sequence, we get a clear idea of the colliding worlds in this film – Camille, a scruffy skateboarder who dresses like the boys, takes a bad fall that makes the surrounding skaters accuse her of starting her period. In the world of “Skate Kitchen,” girls and skateboards aren’t meant to mix. Using this theme of collision, the director does an immaculate job at world-building, partly in thanks to cinematographer Shabier Kirchner. Moselle enjoys utilizing mood-based cinematography which relies on long stretches of slowed-down action shots or close-ups of certain scenes juxtaposed with a character’s wise or existential narration. Picturesque sequences of the girls skating through various landscapes, both urban city streets and foliage-flecked neighborhoods, help provide the audience with a sense of this film’s juxtaposing nature. Further, the mother-daughter nuances are a highlight of “Skate Kitchen.” Camille’s mom (Elizabeth Rodriguez), who speaks in Spanish for almost the entire film, is eloquently performed. She expertly traipses through maternal Hispanic stereotypes without seeming disingenuous or satirical. When she doesn’t want Camille skating she slams on her brakes in the middle of the street to drive her point home, a reckless but relatable decision which showcases her concern for Camille’s safety. On Camille’s end, the director dances you through moments of adolescence with the prowess of a well-trained Olympic gymnast. For instance, when Camille’s mom asks her what she’s looking at on her phone, she replies, “just stuff,” as nonchalantly as any teenager would when doing something they shouldn’t. (i.e., researching female skate groups on Instagram). It’s cinematic strategies like this that keep “Skate Kitchen” from getting lost in  a sea of other young adult stories.

In regards to dialogue, the natural rhythm and flow of overlapping conversation, lapsed words, and incomplete thoughts spoken between friends is an element of “Skate Kitchen” that truly holds its own ground. The conversations shared between the “rowdy-ass girl crew,” as they’re referred as by Jaden Smith’s character Darren, somehow manage to stay quaint and innocent even with crude language and imagery. They pile on a bed and talk about periods, sexual types, and gynecologist appointments. It’s nostalgia on its best day when you could chat about topics you don’t fully understand yet in a safe, albeit unrefined, environment.

Though slightly muted, the characters and performances bring home Crystal Moselle’s desire for a naturalistic film. At times, the performances in “Skate Kitchen” feel more like we’re looking in on real people in a documentary versus actors in a film. Vinberg is lovely as Camille, and the complex expressions and development she feels throughout the film are physically evident through Vinberg’s committed choices to maintaining a grounded and raw film. Further, Elizabeth Rodriguez really shines as Camille’s mom; it would be easy to underestimate the layered position of a single mom, but Rodriguez does so truthfully and compassionately. If these two performances aren’t enough, see “Skate Kitchen” for the group of eclectic and strong young women who make up Camille’s posse. Or better yet, for Jaden Smith’s red hair.

Ultimately, “Skate Kitchen” is what a Disney Channel Original Movie would look like if it had been produced by HBO – naturalistic, perverse, profane, and full of urban grit. “Skate Kitchen” is a delectable reflection of one subculture’s perspective and the many layers of power and complexity that lie within it. “Skate Kitchen” is less about the protagonist than it is about the environment she’s affected by and the tribe of young women (And eventually young men) who help her find herself in the midst of the New York hustle. “Skate Kitchen” sheds light on the counterculture of the 21st century; how it collides with the cultures around it, and also how the groups collide within it.​