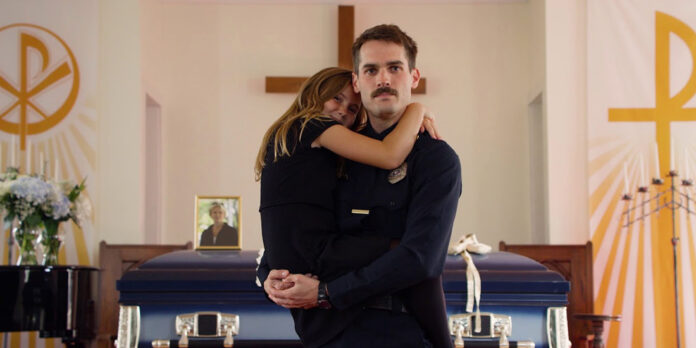 THE STORY – A police officer comes to grips with a death of his mom when giving a heartfelt eulogy at her funeral.

Called up to eulogize at his mother’s funeral, Officer Jim Arnaud begins to stumble endlessly through half-thought memories of how he never did appreciate his mom the way she deserved. She was a dancer and had her own studio, always offering to help others and to Jim, it speaks volumes, although his way of telling these stories is a pathetic sight to see unravel. He hesitates, gets lost in the small details, and is brought to the “ugly cry” as this eulogy becomes something else unexpected. He tries to play her favorite song ‘Thunder Road’ on his daughter’s pink boombox only to somehow malfunction, leaving him to perform the song with his whole-heartedly silly, crying, cop dancing glory. Officer Jim Arnaud loved his mother and it’s excruciatingly apparent.

Derived from his 13-minute short of the same name, Jim Cummings’ “Thunder Road” speaks as an ode to the end of small-town drawbacks and how one cop dad maneuvers through fatherhood with divorce, the demands of his working force, and life in general.  Through the humiliating but heartfelt eulogy, he begins on a turbulent road to solace. There’s an upfront style to the film that pulls you in and invites you to sympathize with Jim although he’s got a lot to figure out for himself. The bouts of dark humor and melodrama culminate to a film that is very aware of its playful absurdities, never kidding the audience. The film won the Grand Jury Award at SXSW earlier this year and it carries as much empathy and emotion as its Sundance Grand Jury Prize-winning short from 2016.

Director, writer, and star of the film, Cummings gives us a close look at a flawed character so quick and confident to be foolish, but who is also the example of societal middle-class anxieties. His relationship with his soon-to-be ex-wife is withering to a cold custody battle. Jim puts on a tough face to the world. “If you see me wrestling an alligator, help the alligator,” a phrase of his that starts to sound defeated when said once more; much like his temperament. His silver lining, this “thunder road” Springsteen sings of, is Jim’s sincere passion when it comes to doing what is right for his life and his daughter. Much like his mother’s favorite song, there’s a hidden sense of faith and desire that Jim just hasn’t understood yet.

Dawning the neat and proper stache, Arnaud is trying so hard to uphold the traits we associate with such a profession, yet he is disarmed continuously by his life, exposing his character’s fragility. It’s in these little conflicts where we get to see a lot of what makes the film work. It’s a peculiar and darkly hilarious character study of a man’s crumbling decency and how he tries to overcome the hard times to try and find the light at the end of the tunnel. Cummings has a keen sense of camera work, focusing closely on his facial emotions and how, so often, we see Arnaud dealing with things in his car, eagerly telling of how this character just wants to drive off and never look back. Whether it’s the sharp, opening monologue in a long take that never quits or the way he comes to master a hand clap game for his daughter, “Thunder Road” is a successful leap of faith in all the right ways.

A champion of ambition and the art of independent filmmaking, Jim Cummings’ vision in “Thunder Road” is incredibly modern and profound with the right touch of desperate reality. Jim’s failure to connect with his daughter Crystal (Kendal Farr) becomes a very sentimental factor to the way life is trying tirelessly to toughen him up out of his own preconceived, and very immature, expectation of life. Only in fourth grade, Crystal jumps into her dad’s car and tries to hide the little makeup she’s applied, but it soon becomes a relatable punch to Jim as he tries to handle the ever-rewarding journey of fatherhood. It’s a mixed bag of emotions with this film as it travels through subjects like his estranged wife’s (Jocelyn DeBoer) suspicious drug use, Jim’s place in the hands of the corporate workforce, and the glimmer of hope that seems to confuse him as the film carries along. He’s a good man with some seriously goofy manchild tendencies that seem to overpower his good at all the wrong times; and ironically, it makes for a great time watching.

“Thunder Road” comes to us out of the woodwork as a heartwarming, awkwardly hilarious vision from a rising filmmaker. Cummings knows how to helm a long take and it is only one of the many surprising attributes to his script. It’s authentic and oddly charming, leaving little room for disappointment.