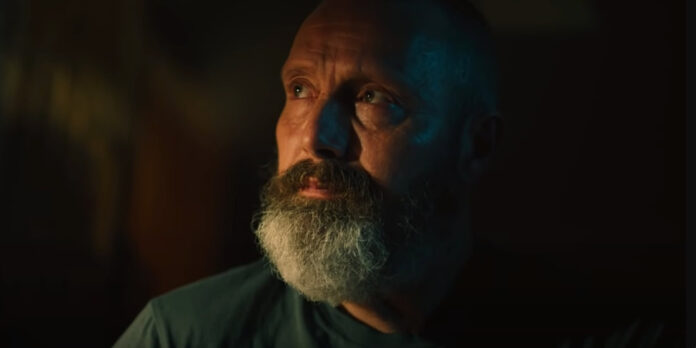 THE STORY – Markus returns home to care for his daughter when his wife dies in a tragic train accident. However, when a survivor of the wreck surfaces and claims foul play, Markus suspects his wife was murdered and embarks on a mission to find those responsible.

​We all handle grief differently. Some choose to speak openly about how someone’s death has affected them, while others keep to themselves, waiting for the moment those tough days start to fade. Markus (Mads Mikkelsen) from “Riders of Justice” has another way of handling those undesirable emotions: he puts all of his time and energy into enacting revenge and choosing violence every chance he gets. My advice is to try to avoid him any chance you get.

The latest film by Danish director and writer Anders Thomas Jensen focuses on that grief through a revenge-fueled lens. Markus is a recently deployed soldier whose life changes when he receives word that his wife was killed in a train accident. His daughter Mathilde (Andrea Heick Gadeberg) was on the train as well, and though she’s unharmed physically, her life has crumbled into pieces now that she has lost her mother. Her relationship with her father is rocky, and any time she tries to talk to him about the accident, he doesn’t seem interested. Mathilde can tell he’s hurting, but it upsets her even more that he doesn’t want to seek help or open up.

Otto (Nikolaj Lie Kaas) is another passenger who was on the train during the accident – he actually gives his seat to Markus’ wife and feels an immense amount of guilt over her death. But he doesn’t think what happened was actually an accident. He noticed a suspicious man get off the train right before the crash, and something just doesn’t sit right with Otto. When the police don’t offer any help, Otto recruits his hacker friends Lennart (Lars Brygmann) and Emmenthaler (Nicolas Bro) to track down the people involved and eventually get Markus interested too. The four men set off on a revenge-fueled journey to find the individuals seemingly behind this attack and justice for Markus’ wife.

“Riders of Justice” pulls you in with this train accident that comes out of nowhere and soon takes you on a gruesome, wild ride that you likely weren’t expecting. As far as action films go, this one had many of the same characteristics as “Taken,” for example, where a man is out to seek justice for what people have done to a family member. Several good sequences show off the deadly Markus machine that might even make audience members quiver in their seats. The revenge component to this film also takes a few twists and turns along the way, playing with different tones and genres, which definitely adds to the story.

But aside from the hefty action and dark comedy, what really stands out from this film is its grief component. Mathilde is practically begging her father to open up and see someone to help process his emotions, but he doesn’t seem interested in the slightest. Even though he tries to put on a tough front and not show that he’s hurting, we can clearly tell that’s not the case. He’s angry, shut off, violent, and overall not a good person to be around. It even takes a toll on his and Mathilde’s relationship, so much so that she doesn’t feel like he’s trying at all, and even going so far as to wishing he was the parent who died.

It all leads to Markus’s exploding breaking point, which perfectly captures all the anger and frustration he has going on inside. It shows that even someone like Markus, a military man who mainly keeps to himself, is battling something harrowing inside and needs help at the end of the day. Markus also has a very emotional conversation with Otto, who has also experienced grief in his life, which puts a lot into perspective regarding Markus’ relationship with his daughter. He’s not much of an introspective man, but when these moments happen, they pull the audience into the film even further.

Mikkelsen is almost unrecognizable in this film as he spots an eerily similar George Clooney “The Midnight Sky” beard. The looks may be deceiving, but the stellar performance one has come to expect from the Danish actor is as clear as day. He fits Markus’ cold and scary persona to a T and adds so much heart to the more emotional moments in this film. Mikkelsen has had quite the year in film with this and “Another Round.” It’s always impressive when an actor has two widely different performances in the same year and pulls them both off brilliantly. Gadeberg also pours a lot of energy and heart into her role, making you feel Mathilde’s pain as she struggles to cope with her mother’s death and father’s indifference. Kaas, Brygmann, and Bro all bring a bit of humor to the screen with their quirky mannerisms and friendship that helps break up some of the heavy moments in this film.

In the long run, “Riders of Justice” doesn’t really give us a unique story. We’ve seen plenty of films that focus on the “husband seeking revenge for wife’s death” trope. But the heavy emotional components and the blend of different genres in telling its story are where it truly shines. It also teaches all of us a valuable lesson: sometimes you can’t find a reason for all the bad things that happen in life, and there’s no sense in trying to pin the blame on one thing or person. Instead, focus on what you have in front of you and work toward it.