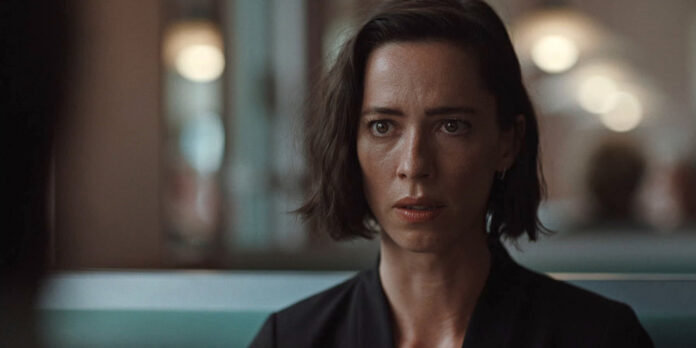 THE STORY – A woman’s carefully constructed life gets upended when an unwelcome shadow from her past returns, forcing her to confront the monster she’s evaded for two decades.

​​​Rebecca Hall delivered a phenomenal performance in last year’s “The Night House,” but nothing can prepare you for her work in the disturbing psychological horror film “Resurrection.” In Andrew Semans’ “you won’t believe it until you see it” film, Hall plays a single mother who has her calm life disrupted by a man from her past. He traumatized her so extensively that she can barely breathe when she sees him – and the real story will have you picking up your jaw off the floor. Through an exploration of grief and trauma, Hall shows us just how easily she can elevate any story, even if it might be a bit bonkers. And this one goes into some of the maddest terrority possible.

Margaret (Hall) is the definition of a no-nonsense badass, and everything about her is ultra-sleek and sexy: her glass-walled office, impeccably designed home, sharp suits, and “get out of my way” power walk. The minute we’re introduced to her, she’s telling her friend to dump her gaslighting boyfriend, so she doesn’t take anyone’s crap either. So much so that she has a no-strings-attached relationship with her married coworker (Michael Esper), which seems to be all she needs. She is also overly protective of her 17-year-old daughter, Abbie (Grace Kaufman), who is about to head off to college. From an outsider’s perspective, it seems as though Margaret has it all. But when Abbie finds a tooth in her wallet, Margaret knows it is only the beginning of a nightmare. Enter David (Tim Roth). Margaret first spots him at a conference and starts hyperventilating. He then starts popping up in parks and department stores, and it’s here when Margaret starts to spiral. More than two decades ago, Margaret escaped her traumatizing relationship with David and never looked back, but now she finds herself back in that awful place. That cool woman we were first introduced to shuts down and almost cowers in his presence, showing just how damaging this man is.

The film starts as a solid mother-daughter relationship drama and trauma exploration thriller, but then divulges into a wild, anxiety-driven spiral into madness and horror. In a seven-minute monologue, in which the camera inches closer and closer toward Hall, Margaret tells her coworker everything that happened in her and David’s relationship and why she had to leave. It’s nothing you could have ever predicted – kudos to Semans for the jaw-dropping bombshells – and much worse than you could have imagined. Hall’s undeniable commitment in that scene (and throughout the entire movie as well) is captivating and will have viewers hooked on every single word.

But the revelation — honestly silly and so far-fetched — isn’t going to be for everyone. The gruesome finale is also so unbelievable that it might take people out of the film entirely, and it is a shame that the film does take such a sharp turn for the worse with such an opaque and confusing finale. The themes examined on their own are compelling, so sticking to reality would have led to a stronger film. But there’s no denying that even when things get a bit wacky, Hall and Roth, who has such a knack for bringing the sinister David to life, totally go all-in with their performances. As Margaret is completely unraveling at the scenes, Hall never goes overboard with her dramatically powerful performance. She always finds a way to keep this woman’s mental and emotional instability grounded, which is something not many actresses can do with such twisted material.

“Resurrection” is not a typical thriller. It might not have your favorite twist, and you overall might not like the direction it heads in, but there is no denying the brilliant performances here or the fact that you’ll be stunned by some of the film’s shockingly memorable sequences. Semans’s ending does not fully come together, but taking a huge risk like this is something that should be applauded, especially since ingenuity seems to be a dying trait in filmmaking nowadays.