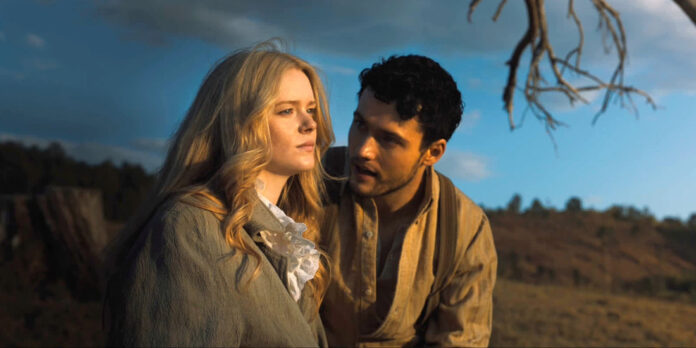 THE STORY – Angel, who was sold into prostitution as a child, has survived through hatred and self-loathing in 1850s California. When she meets Michael Hosea, she discovers there is no brokenness that love can’t heal.

​​​​Occasionally, you watch a film and cannot figure out who the intended audience is. A Christian historical romance film about a prostitute is a confusing concept to begin with, and seeing the movie doesn’t necessarily clear up any of the questions one might have heading in to watch it. Perhaps some people will be interested in “Redeeming Love,” considering the popularity of the 1991 book by Francine Rivers that it is based on. Still, it remains unclear who exactly those people are and whether or not this adaptation will suffice. In fact, Rivers co-wrote the screenplay for the movie alongside director D. J. Caruso, so perhaps it will be well-received by those who liked the book? However, the film’s strong Christian focus and unpleasant sordid content – including child trafficking and incest – seem like they might manage to alienate any and all potential audience members in the process.

“Redeeming Love” opens with a title card of the quote by William Shakespeare, “All that glitters is not gold,” before showing shots of men sifting for gold in the river. It is perhaps the least subtle way a film could indicate it’s taking place during the California Gold Rush. Angel (Abigail Cowen) is a beautiful prostitute who is so popular with the men of the small mining town she lives in that the brothel madame draws a lottery for which man will have the opportunity to sleep with her. Though she’s found some camaraderie with the other girls of the brothel, she’s hardened to the world, saying she’s learned to “never look back, never look forward.” It is no wonder that she’s closed off, considering the way she is treated by those who run the brothel and the horrible events of her childhood that we see through flashbacks. Though her mother Mae (Nina Dobrev) loved her and her father initially provided for them, he was angered that his mistress allowed the illegitimate child to be born. Angel is the victim of a seemingly never-ending series of horrible events that are very unpleasant to watch. But when the farmer Michael (Tom Lewis) sees her across town, he hears the voice of God telling him that she’s the one (Yes, that is an actual central plot point). Therefore, he relentlessly pursues Angel. Eventually, he convinces her to marry him, but they struggle to understand each other. In the end, love finds a way to prevail, and Angel is healed by her relationship with Michael and by finding her own connection to God.

The filmmaking from D. J. Caruso and cinematographer Rogier Stoffers is passable, with its sun-dripped vistas and magic hour aesthetic. However, it’s at about the level one would expect from a Hallmark film (though the content itself is considerably less PG). Despite these pleasing visuals, the costuming, hair, and makeup are a mess from a historical accuracy perspective. Angel not only continually has her hair worn down in perfect curls as though she’s just been to Drybar, but she also wears a corset with nothing underneath it several times. There are also some strange music choices throughout, giving the already caught in an identity crisis film a strange and unclear tone.

The performances are mostly decent (and that’s me being generous), with Nina Dobrev being the clear standout amongst the cast. However, she plays a minor role and is not featured enough to save the movie from its unnaturally awkward storytelling. In what should’ve been a breakout role for her, Abigail Cowen never seems quite as hardened to the harsh world as the script tells us Angel is, which creates quite a bit of dissonance between her and the audience.

The biblical story of Hosea may have inspired Rivers’ novel, but “Redeeming Love” the film is an odd mix of Christian sentiment and sordid events, never able to blend together successfully to create anything satisfying or life-affirming. Throw in some average filmmaking and performances unable to elevate the material. It becomes painfully clear that this film will struggle to find an audience that can appreciate it outside of those who initially loved the novel. So, it brings me no joy to say “Redeeming Love” is pretty irredeemable.