Recapping The Good & The Bad From The 2021 Emmy Awards 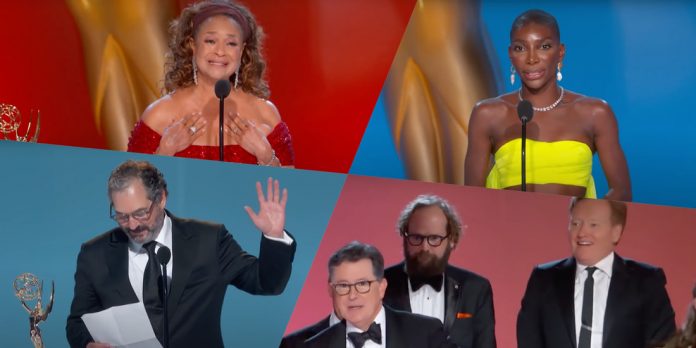 ​The 73rd annual Primetime Emmy Awards concluded last night with rewarding the three shows we expected them to reward all season long: “The Queen’s Gambit,” “Ted Lasso,” and “The Crown.” Below is a breakdown of the good and the bad from last night’s awards ceremony.

Mr. Murphy and the West End: Hannah Waddingham and Evan Peters both won their first Emmy awards last night, but neither forgot where they got their start giving appropriate shoutouts to their roots in their acceptance speeches.

Someone needs a Drama Guest spot: Gillian Anderson is one award away from having the trifecta set of Drama prizes. She now has Lead and Supporting wins. What could get her that Guest Actress win? Imagine how amazing she’d be “Succession!”

How to repeat a win: The writers of “Last Week Tonight Witha John Oliver” delivered a hilarious speech with a wink to the show’s ongoing infatuation with Adam Driver. John Oliver honored Conan for his 30 years on television, which was an excellent use of his speech time. “SNL’s” Lorne Michaels also provided a loving tribute to the recently passed Norm McDonald, proving just how much his cast members, both past and present, mean to him.

A winning combo: “The Crown” and “Hacks” both found success with a single episode sweeping both the writing and directing categories for each show. This will be something to watch out for in the future when predicting these two awards.

Brits are just better with words: If you’re a British writer, but you aren’t the expected winner, and you’re looking for a win somewhere, the category to be is Limited Series Writing. Michaela Coel not only kept this odd streak alive of recent British winners but gave a fantastic speech while making history as the first Black woman to win this category.

Losing twice is hard: Aidy Bryant and Kenan Thompson showed a lot of class losing twice in one evening. It’s easy to be gracious once— twice is almost impossible.

Queen Colman: Like Claire Foy, Olivia Colman won on her second nomination for Netflix’s “The Crown.” She kept her speech short but was as lovely as she always is. Add a touching tribute to her father, who passed away during the pandemic, and an explicative shoutout to Michaela Coel at the very end, and Colman’s awards season charm at the microphone remains undefeated.

Emmy Support Group: One of the better-planned bits of the evening was a support group of actors and actresses who’ve never won an Emmy before. While the Dr. Phil appearance at the end was an eye-roller that threatened to derail the segment, standouts Jason Alexander and Fred Savage kept this comedy moment alive.

Coming from behind: HBO was down after the Creative Arts Emmys, but they were definitely not out, as almost every upset tipped in their favor the night of the Primetime Emmy Awards with “Hacks” winning Comedy Writing and Directing prizes along with a lead win for Jean Smart. And “Mare of Easttown” had its actors rewarded as Kate Winslet, Julianne Nicholson, and Evan Peters all took home Emmys in the Limited Series/ TV Movie categories.

Love that Schitt: “Schitt’s Creek” made history last year during the Zoom Emmys, becoming the first continuing series to sweep the top seven prizes. It was clear the audience still loves the Rose family as they appeared on stage together to present and were greeted with a thunderous ovation displaying that the Television Academy would happily welcome them back if they were ever willing to return to our screens again.

About time for Netflix: “The Crown” performed better than expected, winning 8 of the top 9 awards (sorry, Charles Dance), including Outstanding Drama Series. It made history as the first continuing Drama series to sweep the top 7 awards last night and gave Netflix their first Drama Series win, a prize they have been seeking since the first season of “House Of Cards.” After dominating the early part of awards season and picking up 9 Creative Arts Emmys, “The Queen’s Gambit” failed to keep the momentum going throughout the evening but rallied back at the end with wins for Directing and Limited Series. Not a lousy make-up evening all around.

#EmmyySoWhite: Somehow, someway, we’re here again. After being more consistent than the Oscars with rewarding diversity in their acting winners these past few years, the Television Academy gave all of their acting prizes to white performers, setting them back a bit in the organization’s desire to continue to champion diversity amongst the winners.

How much TV are they watching?: One thing became abundantly clear last night: the Television Academy really only watched five Series this year. Those five being “Ted Lasso,” “The Queen’s Gambit,” “The Crown,” “Mare of Easttown,” and “The Mandalorian.” Maybe it would be best for the Television Academy to go back to a panel system and ranked ballot, giving those from a series not amongst the nomination leaders a fighting chance at a victory?

Winning isn’t everything: “Ted Lasso” learned a harsh lesson last night. It’s all good on nomination morning to have three directing and two writing nominations— but it’s not so hot come Emmy Sunday. Hopefully, Apple TV+ learned from this and will do better next year to push a single episode for these prizes.

How many lifetime achievement awards are too many?: Debbie Allen deserves every accolade on the face of the planet. However, in 2021 Allen was honored at the Kennedy Center and was now awarded the Governor’s Award at the Emmys. Maybe awards groups need to have an agreement in place that a person can only win one lifetime achievement award in a single year to avoid redundancy and recognize more people.

Less nominees: If there have to be eight nominees in the supporting categories, maybe there needs to be a cap on how many spots a series can occupy? It’s becoming too much.

Everyone (Kind of) Loves Conan: Well, everyone except the Television Academy who chose to pass over the Late Night talk-show host in favor of John Oliver (again). However, Conan refused to go unnoticed last night as he interrupted the Television Academy President’s speech, much to the room’s delight, and hopped on the stage during Stephen Colbert’s Emmy win last night. It’s clear he did not care about any repercussions and was just having fun. It would’ve been better, though, to see him win.

Set up and no pay off: Audiences will miss Michael K. Williams, and honoring him during the in memoriam was the right place to do so. However, watching Kerry Washington honoring him right before she opened up the envelope for the category he was nominated in (Drama Supporting Actor), only to see him lose to Tobias Menzies in “The Crown” was a severe letdown and poorly reminded us all what happened at the Oscars earlier this year with the show’s presentation trying to conclude with a Chadwick Boseman win.

Cut him off: Did Scott Frank (“The Queen’s Gambit“) know he would lose Writing after this? That’s the only explanation for such a long-winded, never-ending acceptance speech that overstayed its welcome and came off as disrespectful and egotistical, despite his kind words towards Anya Taylor-Joy, who would lose to Kate Winslet later in the evening. Not even Jean Smart could hold off the music as many times as Scott Frank did. Sometimes when it’s time to leave the stage, it’s time to leave the stage!

Cloris Leachman: The late legendary actress won an incredible 8 Emmys and received 22 nominations. She deserved to appear in a better slot during the In Memorian than in a wide shot. Perhaps a former costar could’ve honored her before the segment began, or she could’ve been given a speaking clip as Michael K. Williams was given? Either way, she deserved better.

EW-wan: Ewan McGregor?! Seriously?! He didn’t even give the best performance in a Ryan Murphy production this season. I’m not sure what others saw in his over-the-top performance in “Halston.” If they wanted to make up for not giving him the win a few years ago for “Fargo,” mission accomplished. There were other more deserving nominees amongst the group (looking at you, Hugh Grant).

​What did you think of the Emmy awards last night? What were some of your highs and lows from the evening? How did you do on your predictions? You can listen to our thoughts on the latest episode of the Next Best Series podcast here. Let us know your thoughts in the comments section below or on our Twitter account.