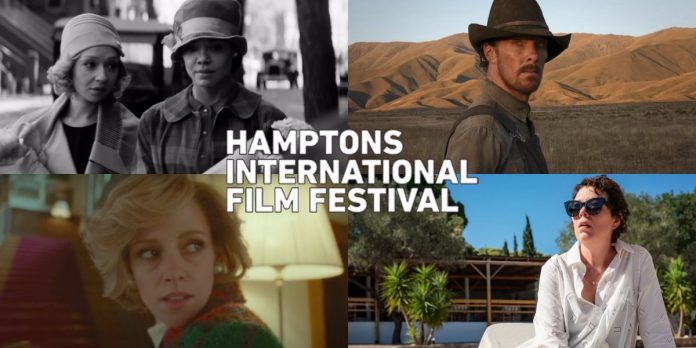 ​The 29th annual Hamptons International Film Festival took place from October 7th – 13th, 2021, and I had the pleasure of attending this year. After a year and a half of being in the lockdown and watching films at home due to the coronavirus, it was a delight watching films in a grand theater with fellow film lovers. Standing in line and talking to fellow cinephiles about their favorite films at the festival and what they thought after each screening has and always will be a highlight of the movie-going experience. I am so excited that we are safely going back to this activity.

Being from Long Island, I took the hour and a half drive out to the Hamptons each day I could to see what films would fit in my schedule. During the completely in-person event, the festival hosted several films, including “Belfast,” “A Hero,” “Benedetta,” “The Worst Person in the World,” and much more. Due to my schedule, I could only see a few films this year, but all were thought-provoking and exciting pieces. So without further adieu, here is what I saw at this year’s Hamptons Film Festival.

PASSING
As a former English literature student, “Passing” has been on my most anticipated list since I learned it was being adapted. Based on Nella Larsen’s novel of the same name (published in 1929), “Passing” tells the story of two women in the 1920s, Irene and Clare, played by Tessa Thompson and Ruth Negga, who are childhood friends. But when they reunite as adults, Irene finds out that Clare has been passing as white for most of her adult life. Within the book, Larsen intertwines multiple themes and genres within her small page count, which makes an adaption of this material entirely dependent on the writer and director’s stance on the text. Rebecca Hall is solid in her directing debut and makes obvious choices that may steer away from Larsen’s text, but it is Thompson and, especially, Negga who soar.

SPENCER
As soon as I found out “Spencer” would be playing at the Hamptons Film Festival, I knew I had to see it. From the unanimous raves about Kristen Stewart to the fact that we are currently living in a time where every major form of visual storytelling has a piece featuring the late Princess Diana, “Spencer” probably was the film with the most hype around it, and it did not disappoint. Pablo Larraín fully commits to Diana’s tormented perspective, as he transforms the Magical castle of the British monarch into a haunted house that is consuming all known foreigners. Jonny Greenwood’s score emphasizes Diana’s uneasiness, and Guy Hendrix Dyas’ production design is divine. But every element in the film is here to support Stewart, who brilliantly captures Larraín’s vision. Within every frame, Stewart portrays Diana’s anguish and discomfort but also her strength and undeniable resolve. All of it results in both a fabulous portrait of a woman reclaiming her agency and a touching tribute to the Princess loved by all.

THE POWER OF THE DOG
I will always be in awe of how comfortable Jane Campion is when it comes to her storytelling. She is never afraid of rushing through a narrative and instead loves to take her time exploring her characters’ lives. The end result is a much more effective viewing experience. “The Power of the Dog,” based on the novel by Thomas Savage, takes a look into toxic masculinity, gender, and power dynamics, and so much more in one of the most masculine settings: the American West. As mention above, Campion takes her time to tell this story and adds layer upon layer as she slowly reveals her characters’ motivations. Ari Wegner’s cinematography is breathtaking, and all the actors (especially Benedict Cumberbatch, Kirsten Dunst, and Kodi Smit-McPhee) are excellent. “The Power of the Dog” is one of those films that will unveil more after each viewing, and for that, I cannot wait to watch it again (and potentially read the source material).

THE LOST DAUGHTER
In her directorial (and writing feature) debut, Maggie Gyllenhaal tackles the tolls of the modern mother adapted from Elena Ferrante’s novel. “The Lost Daughter” is a strong directorial debut (more so for Gyllenhaal’s direction than her writing) that proves Gyllenhaal knows precisely how to direct her actors. She knows how to play up to all of her actors’ strengths, even within a film about everyday occurrences and internal struggle. Dakota Johnston is just as alluring as she is overwhelmed and indirectly asking for a lifeline from anyone. Jessie Buckley plays a woman teetering on the edge brilliantly. Still, it is Olivia Coleman who, once again, proves she is one of the greatest actors of her generation as she portrays a character who is unlikeable but also understandable at the same time in this complex and challenging story.

​Have you seen any of these films yet? if so what did you think? Have you ever been to the Hamptons International Film Festival before? Let us know in the comments section below or on our Twitter account.