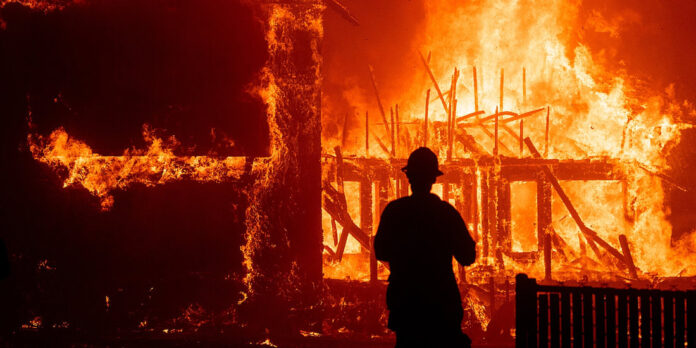 THE STORY – After the devastation of the 2018 Californian wildfires, Ron Howard and his team follow the residents of Paradise as they try to rebuild their lives.

​On November 8, 2018, California suffered from the state’s most devastating and destructive wildfire in its history. Known as the “Camp Fire,” it quickly spread due to strong winds and a faulty powerline, causing the small idyllic town of Paradise to become consumed in a fiery inferno. By the time the fire had been extinguished, 85 people had tragically lost their lives, 50,000 residents had been displaced, and 95% of local structures had been destroyed.

We see the devastation in all of its disturbing glory in the opening to Ron Howard’s documentary entitled “Rebuilding Paradise”. The film’s opening fifteen minutes are a vision of hell on Earth, as we are presented with multiple videos taken by the residents, firefighters, police officers, and news reporters who were there on that fateful day. This footage is truly apocalyptic stuff, a living nightmare that people actually endured. It’s hard not to be caught up in all of the emotion that is occurring on-screen, and this superb opening is perhaps the tensest fifteen minutes of cinema this year.

With Hans Zimmer and Lorne Balfe’s score, we can’t help but be reduced to tears; however, at certain points, the score feels too cinematic, too overpowering. The simple sounds of the fire roaring and the winds howling are far more impactful. Lincoln Else’s cinematography is also epic and cinematic in terms of scale, the drone and aerial shots peering down at the obliterated town look like something out of a Hollywood blockbuster film. Considering all these aspects, it almost feels like the wrong approach to take. We as the viewer almost feel detached from the event as if we are merely spectators watching the latest disaster film at the theatre.

For the next 80 or so minutes, we follow several residents of Paradise as they come to terms with what has taken place and try to decide what course of action to take: do they return and try to rebuild, or do they move away and start fresh? We’re introduced to several different people, from police officer Matt Gates, the town’s mayor Woody Culleton, Michelle John (the local school’s superintendent), and high school seniors Brandon Burke and Zach Boston. Each person has a dramatic story to tell, recounting how some of them barely escaped with their lives. At times the camera feels a bit too invasive as if Howard is trying to exploit these people rather than capturing their struggle. Often it all becomes too much, and you almost want to shout at him to back off and let them grieve in peace.

While “Rebuilding Paradise” has a very strong opening that hooks the viewer in, the rest of the film feels a little too bloated. There are just too many names and too many faces to keep track of. We jump from one individual family to the next as we watch them over the course of a year trying to rebuild their lives. Of course, each one of their stories is tragic, and we feel empathy for each and every person featured in the documentary. However, it feels a little unfair that we don’t spend more time with each person; the documentary whizzing along at such velocity that we almost become disconnected from the people in the process. Just who should we be following? Which stories should we be invested in? Howard seems to giddy with all the grim excitement of capturing the aftermath that he doesn’t seem that too concerned that these are real people, not actors on a film set.

There’s also a lack of hard-hitting investigative journalism going on here. Where is the anger and the rage felt towards the Pacific Gas and Electric Company (PG&E), whose negligence in repairing a faulty power line led to sparks igniting the woodland fire? One has to wonder what approach another documentarian like Michael Moore would have taken in telling this story. Surely, the tale of a small town going up against a billion-dollar cooperation should be the real crux of this story, but the whole settlement is barely mentioned. And what about our own role in this disaster? What about the effects of climate change and logging? While this subject is touched upon, it too feels like an afterthought.

This isn’t to say that “Rebuilding Paradise” isn’t an inspiring and heartfelt documentary. Howard and his team do seem to genuinely want to shine a spotlight on the town of Paradise and its townsfolk. There are touching scenes of the community coming together for a parade and the high school graduation, but everything after the film’s dramatic opening minutes seems to be very subdued and anticlimactic. Progress is slow here, it takes months for building permits to be permitted, and it’ll take years to fix the town’s water supply. Knowing all of this information, one has to wonder whether it’s too soon to be telling this story.