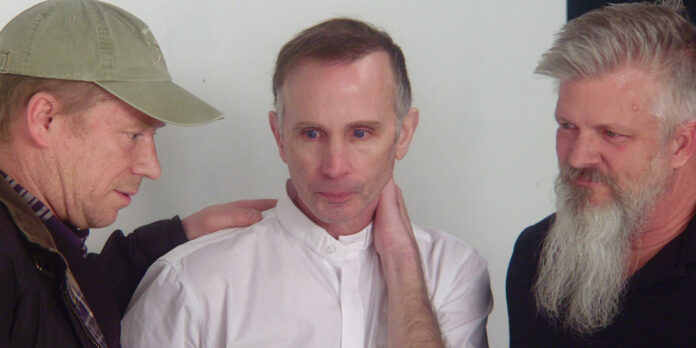 THE STORY – A group of survivors of sexual abuse by Catholic priests battles for justice and collaborates to create fictional scenes depicting rituals of power in the church.

​​​On its surface, “Procession” might appear to be yet another in a growing line of documentaries taking on the Catholic Church’s culpability in ignoring the decades-long sexual abuse of children perpetrated by its priests. But look closer, and you’ll begin to see that this film is really about something just as profound but somehow very different: the power of art to heal.

Director Robert Greene has chosen to tell his story through the experiences of six middle-aged men who, despite their accomplishments elsewhere in life, are still traumatized by the sexual abuse they suffered as boys by Kansas City-based priests more than three decades before. In an effort to help the men to relieve that trauma, Greene enlists the expertise of Monica Phinne, a drama therapist who utilizes role-play as a means to help survivors of trauma overcome their feelings of victimization.

“Procession” captures that process step-by-step as Phinne works with the men — contractor Ed Gavagan, film location manager Dan Laurine, and interior designer Michael Sandridge, as well as Mike Foreman, Joe Eldred, and Tom Viviano — to establish ground rules for their role-play. Five of the men will each write his own story in a short episode (Viviano cannot tell his own story because of his ongoing legal actions against the Church). Still, all six agree to perform within each scene, acknowledging that they need to walk together through each other’s memories to confront the things that haunt them the most.

The most difficult decision, agreed to by all, is to stage their recreations on the very sites (where possible) where their attacks occurred. For many of the men, the location where it happened is as profoundly entwined in their memories as those of the molestations themselves, and for several, their greatest fear was becoming retraumatized by returning to the scene of the crime. Each man who returns, however, overcomes that obstacle and experiences his own emotional catharsis.

Tears flow pretty often in “Procession,” but these are not the kind of tears one often sees in documentaries where the subject is moved to weep for a moment. In this film, these are big heaving tears that seem to start from each of the men’s feet and move up through their bodies until the survivors finally burst out in sobs. It’s at moments like these that each man has begun to take back the power that he once had over his memories and to be able to share that moment with others who shared that same experience in their own lives.

There are echoes here of Joshua Oppenheimer’s superb 2013 documentary “The Act of Killing,” in which one of the perpetrators of the Indonesian genocide of 1965 seeks a catharsis as he reenacts the many atrocities for which he admits to being responsible. When the shoe is on the other foot here, and the reenactments are from the victims’ side, the horror we felt in the Oppenheimer doc gives way to empathy and admiration in “Procession” at the courageous path that these men are choosing to take.

There comes a point in “Procession” where the men’s scenes are finally performed, sequences that require us to take off our critic’s hats and simply just watch without judgment. Are some stories better performed than others? Of course, but that’s irrelevant — these scenes weren’t written for us. Each man wrote his script for an audience of one — himself — and to see each survivor come out the other side a stronger, more empowered person is all we need and want to know.

Much credit for the power of the scenes must go to teen actor Terrick Trobough, who plays the younger version of the survivors in their sketches. It is through him that the men are able to channel just what they were feeling at the moments of their molestations. After each scene, the men usually crowd around Terrick to make sure he is OK, but the boy, ever the pro, kindly laughs it off, considering the job just another gig.

As a tribute to the collaborative nature of “Procession,” Greene gave up his solo “A Film By” credit to share it with Phinne, his crew (cinematographer, sound guys, and composers), and most importantly, all six of the survivors. It’s only fitting since “Procession” feels like a truly collaborative effort, and we are all much the better for that.