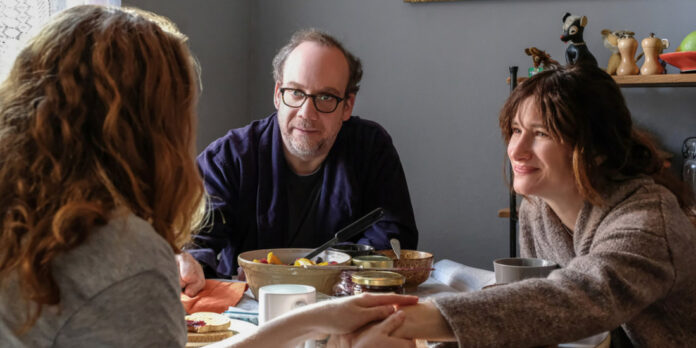 THE STORY – Rachel (Kathryn Hahn) and Richard (Paul Giamatti) have been repeatedly trying to get pregnant, undergoing multiple fertility treatments while also exploring adoption and other options. As they hit obstacles and face up to the reality of their chances, their strained marriage seems to be further than ever from completing the elusive path to parenthood. An unexpected Hail Mary arrives in the form of their step-niece Sadie (Kayli Carter), a recent college dropout who crashes on their couch and might just prove to be the last, unconventional piece of their fertility puzzle.

​​​​Writer/director Tamara Jenkins (“The Savages”) has not had a new film in eleven years. She has come roaring back at the festival that made her a household name with “Private Life” (Being distributed by Netflix). The result is a heartwarming, often times funny, sometimes heartbreaking look at a middle-aged couple trying to conceive a child against all odds. It’s a humanistic return for Jenkins, who is able to show all of the highs and lows of this couple, their extended family and their hopes and dreams for the family they hope to one day have.

Rachel (Kathryn Hahn) and Richard (Paul Giamatti) are a loving couple in their mid 40’s living in New York City who has been trying for years to have a baby. They have since turned to fertility clinics, possibly adoption and other avenues to try and achieve their goal. Just when all hope seems lost, they arrive at the idea of asking their loving step-niece Sadie (Kayli Carter), a recent college dropout, who crashes at their place (Due to a contentious relationship with her own parents) to be their last chance at solving this long and arduous fertility puzzle.

Right from the opening shot of the film, Tamara Jenkins makes it very clear that she’s interested in finding the brilliant moments within the simple and mundane aspects of life. There are more than a few improvisational and surprising moments that feel totally authentic and places you firmly in the lives of Rachel and Richard. Both of those characters are expertly played by both Kathryn Hahn and Paul Giamatti with warmth, humor, and nuance. They have fantastic chemistry together and it only gets better when you introduce the supporting cast which includes Molly Shannon, John Carroll Lynch (As Sadie’s parents) and newcomer Kayli Carter who steals the movie as the artistically soulful and loving Sadie.

Where “Private Life” excels is in showing how multidimensional the main trio of characters really are. This is slightly less so for Molly Shannon and John Carroll Lynch but there is a fun performance from Denis O’Hare as the gynecologist who enjoys prog rock and makes analogies between getting pregnant and soda machines. Where “Private Life” falls a little bit for me is in its length. The film is over two hours long and the premise and pace of the film suggests that it should be a 90-minute film instead. Too often, the theme’s of the film or character-building moments are repeated and the story takes too long to finally wrap up. One could make the argument that it takes a long time to finally wrap (And doesn’t fully) because Rachel and Richard’s journey is one that is long and hard as well. I would still argue that could have been accomplished with a shorter runtime. The final shot of the film goes a long way though in establishing the film’s theme and reinforcing that the long runtime is necessary, so if it works for you, great. If not, you’ll be like me and realize that we could have arrived at the same ending much sooner.

All in all, “Private Life” is an intimate look at very human characters caught up in a troubling and tiring situation that conveys the right amount of laughter and emotion. The performances are all solid (Hahn is probably best in show by most accounts), it is shot very well and the subject matter is a unique one that you don’t normally see on film that often. However, a bloated runtime and one too many meandering scenes holds it back from being as fully realized and great as “The Savages.”