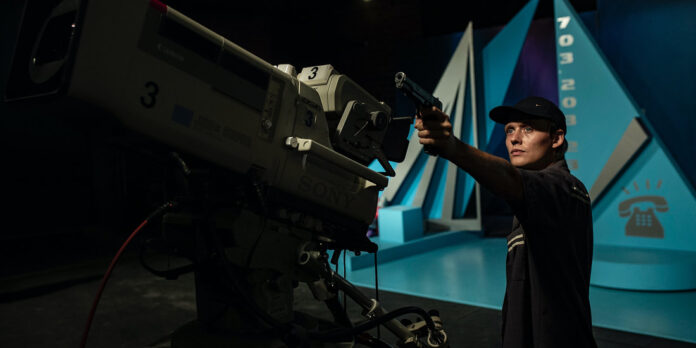 THE STORY – New Year’s Eve 1999. Twenty-year-old Sebastian, armed with a gun, hijacks a TV studio and takes two hostages—a famous TV presenter and a security guard. His plan? No one seems to know, including Sebastian himself. His demand to deliver his message, whatever that may be, via live broadcast is repeatedly thwarted by an uncertain police force and an egotistical network chairman. As the night wears on, Sebastian and the hostages bond in unexpected ways, while those in power fumble to restore order.​
​
THE CAST – Bartosz Bielenia, Magdalena Popławska, Andrzej Kłak, Małgorzata Hajewska-Krzysztofik, Dobromir Dymecki & Monika Frajczyk
​
THE TEAM – Jakub Piatek (Director/Writer) & Lukasz Czapski (Writer)
​
THE RUNNING TIME – 93 Minutes

​​​​Jakub Piatek makes his feature directorial debut with “Prime Time,” a thriller about a hostage crisis in a Polish TV studio on the literal eve of the new millennium. Stories of gunmen holding up institutions of power have always been a staple in the world of movies, and this one seeks to bring a highly personalized perspective to the formula. And while the film does an excellent job at carving out its characters, especially the troubled young man at the story’s center, it ends up not being as tense as one might expect from a story about such a situation. Couple that with the fact that it all ends up being slightly empty, which may be intentional but is still disappointing, and “Prime Time” is a somewhat interesting crime story only because of its surface-level qualities rather than anything deeper or more profound.

Bartosz Bielenia stars as Sebastian, a young man who invades a TV studio and holds a guard and a television hostess hostage at gunpoint. It’s not immediately clear what exactly he wants, besides a moment to speak his mind on live television. Police and hostage experts are quickly called in, and a game of back-and-forth communication and negotiation begins.

After turning in a revelatory performance as the lead in 2019’s “Corpus Christi,” it’s exciting to see Bielenia return to the screen in another stunning performance. His haunted, angular face is perfectly calibrated at all times to exhibit a wide array of emotions, quickly changing between frustration, exhaustion, and pain. He’s even able to layer these seemingly disparate feelings in multi-leveled moments of anguish. He even manages to derive pity and keeps the audience guessing as to what he’s going to do next, which makes up for a shocking lack of tension in both the film’s writing and directing. Whatever he goes on to do next, we should all keep an eye on him.

The ambiguity of Sebastian’s plan is at first intriguing, but as the film goes on, it does little to delve into the finer details of what he’s trying to say with his unique opportunity, which, consequently, means the film stays tightly closed off. This could potentially inspire curiosity in its audience, but I found it merely frustratingly mystifying. There are fleeting moments that hint at a greater purpose to everything we’re seeing, but again, the film seems completely uninterested in exploring them further. For example, in transitional sequences, we see televisions showing different broadcasts. One of them features young men who pointedly resemble Sebastian in age and appearance, all discussing how they feel there isn’t much future for them in their homeland and plan to go west as soon as possible. I’ll admit to not knowing much about Poland’s sociopolitical status at the end of the 20th century, but providing only a cursory glimpse at a more extensive meaning for the story only puzzles in its lack of deeper exploration. I imagine that’s the point, and it’s supposed to reflect the uncaring societal landscape in which this film makes its home, but I still find that dramatically unsatisfying.

Not only is the film’s greater purpose challenging to deduce, but for the type of story being told, this film is surprisingly not tense. It shows moments of energy, but it’s all fairly inert. Again, this may be an intentional subversion of the audience’s expectations, but it fails to satisfy with its withholding nature.

A stunning central performance does a lot to rescue what the film’s screenplay lacks. While it’s an occasionally refreshing look at a hostage crisis, “Prime Time” is unfortunately understated to the point of being nearly anonymous.